Residents told there will be more water outages this week 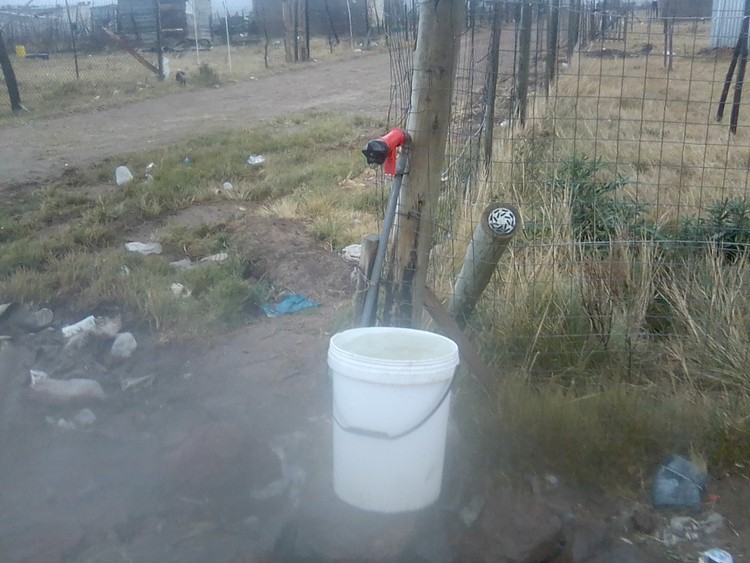 Enkanini informal settlement residents have been without water supply for several days. Many households who can afford to, have been buying buckets of water from neighbouring communities. Photo: Loyiso Dyongman

Makhanda residents are bracing for more water outages from Tuesday. This comes as the taps in Extension 9 and Enkanini Informal Settlement have been dry for several days already.

“The water just comes back for one or two hours and you never know when that will happen. … It’s been like this for years. This municipality has a serious service delivery problem, especially with water,” said Nobendiba Magwaca from Extension 9.

Siviwe Nqwarha lives with his wife and three children. He said toilets in the area stink. “We have been breathing the unbearable stink from the toilets all week because we have to use them even without water to flush.”

Khayakazi Batyi said, “I’m planning to fill as many drums and 20 litre containers with water to avoid situations like this. To bathe I have to use a small amount of water. To relieve myself I go to the bushes about 1km or more from here in Extension 9. It is a risk especially for us women and our kids.”

Batyi said buying water is very costly for most people who have large families and others who don’t have money. “We have resorted to buying water from nearby locations that are fortunately not affected by the outages. Nobody offers you water for free because they pay water rates.”

Nomsimelelo Futshane from Enkanini informal settlement said the water outages often happen without warning. “The last time I saw water coming out of the taps here was last Monday. On Friday, I tried my luck and the taps were blowing air,” she said.

Futshane is the only person employed in her home. She earns R200 for two days of work per week. She has had to use the little money her family has to buy water. Futshane said 20 litres of water costs R30. She buys three if water is out for a week. She said that last year, Gift of the Givers assisted with a water tanker twice a week but now it’s gone.

Questions about the outages sent last week to Makana municipal spokesperson Yoliswa Ramokolo were not answered.

Ramokolo said in a statement on Monday morning that water supply “was opened to all consumers” but urged residents to “brace” for yet another shut down from Tuesday 3 August to “refill the reservoirs on the Eastern and Western side on alternative dates”.

Municipal Water and Sanitation Manager Gubevu Maduna also did not respond to questions sent to him.