Ward councillor says Komponi occupiers must fend for themselves 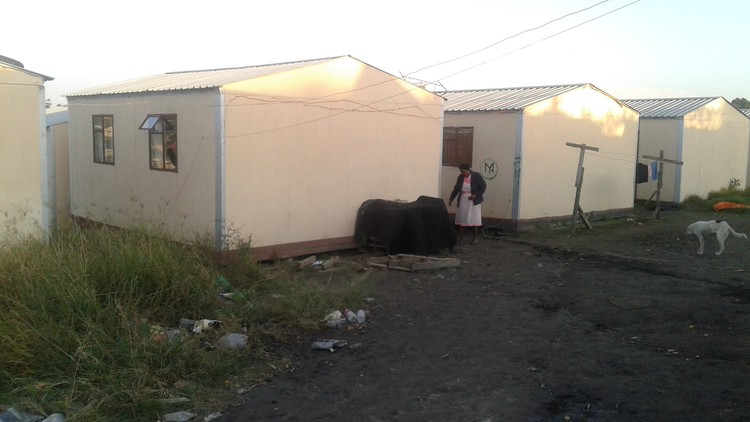 About 60 families moved into vacant prefabricated units in Komponi NU4 in Mdantsane two years ago. The units were meant to be temporary housing for a group who have since moved into a new housing project nearby. Photo: Nombulelo Damba-Hendrik

About 60 families who moved into vacant prefabricated units in Komponi NU4 in Mdantsane will have to fend for themselves, says ward 17 councillor Pumla Yenana.

“They are there at their own risk … I made it very clear that I will not provide services in the area. If they have a problem, they must not call me because I do not know them,” Yenana told GroundUp.

Several residents living in the units claim that they were meant to benefit from a housing project nearby. The occupants say they moved into the one-room units after seeing them standing vacant for three months and becoming hangouts for criminals and drug users.

The units, set up by the Buffalo City Metro Municipality in 2013, were meant to temporarily house residents of Masibulele informal settlement. Their shacks were demolished to make way for the Masibambane Housing project. The units were placed on land about a kilometre from the housing project. The houses were completed in 2016.

Once people had moved into the new houses, the units stood vacant for about three months, said resident Ayabulela Toku. He was a backyarder in Masibulele. Toku said he had applied to get a house at the new development but did not qualify.

The 60 families occupying the units share one standpipe tap and ten toilets, which they say are regularly blocked. They also rely on illegal connections for electricity.

Another resident Nolubabalo Teyise also did not qualify for the project and moved into a unit with relatives two years ago. “At least now people feel safe when they pass here, unlike in 2016 when the shelters were used by criminals,” she said.

Resident Lizeka Batyi, 63, said the house she was initially allocated was given to someone else.

When asked about Batyi’s case, Buffalo City Metro Municipality spokesperson Bathandwa Diamond explained that the house was given to a resident who had been living in the settlement longer than Batyi. She added that Batyi would be accommodated at another project in Mdantsane Zone 18CC.

But time is running out for the occupiers, said councillor Yenana, and warned that the units would be removed soon. She said she would only assist “eight people who were left behind [in the Masibambane Housing project]” to find a home at other projects.