“A time bomb waiting to explode” 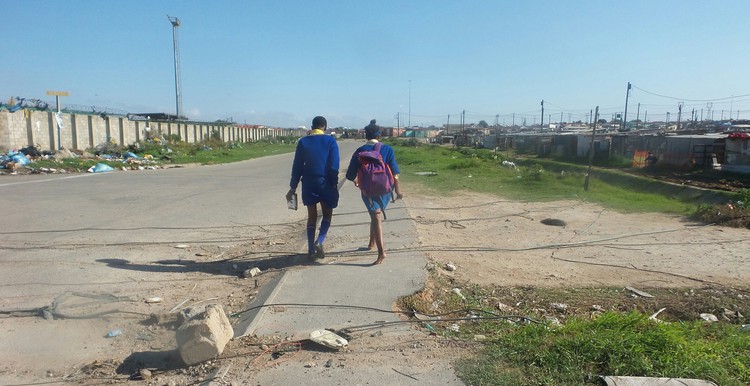 Children at Mboniselo Primary School have to step over exposed electricity cables on their way to school. Photo: Joseph Chirume

Children at a Port Elizabeth primary school have to step over exposed electricity cables on their way to school every day.

The cables are illegal connections from two power supply boxes in the street to shacks in Ramaphosa informal settlement.

The settlement is not connected to the Eskom grid. A project to bring in electricity was rolled out last year by the Nelson Mandela Bay Municipality. However, progress has been very slow. Pylons and cables have been installed but homes have not been connected, prompting people to break into two nearby supply boxes to take electricity illegally.

Most parents accompany the children to school to ensure their safety.

A group of learners interviewed on their way to school on Wednesday said the uncovered wires were putting their lives at risk.

Speaking on condition that their names would not be published, the children said they were scared to cross the road.

A 12-year-old girl said, “This is the most dangerous part of my daily journey to and from school.” She said her parents had to leave for work early and left the children to find their way to school.

“They remind us all the time to look carefully for the cables. They tell us to jump over them and never step on any of the wires. The place is terribly dangerous.”

A grade six learner said his mother had told him not to run when crossing the cables. He said when it rained, water gathered in the area, submerging the cables and making them difficult to see. He suggested the cables should be wrapped in hose pipes for protection.

“There are children who do not have shoes. It is even worse when it’s raining because water is a good conductor of electricity.”

Hopa said he hoped the electrification of the settlement could be speeded up so that people could buy electricity.

Anelisa Malgas lives in Ntlangu Street, which is a few metres from one of the electricity supply boxes that was vandalised.

She said, “We fear for our children and our animals like dogs and chicken that roam around.”

Malgas said the municipality should remove the illegal cables and protect the supply boxes to prevent vandalism.

“We call upon residents to work with us to stop these connections as these cause a serious risk, in some instances death,” he said.