There is money to fix our schools, but it’s not being spent, says Equal Education 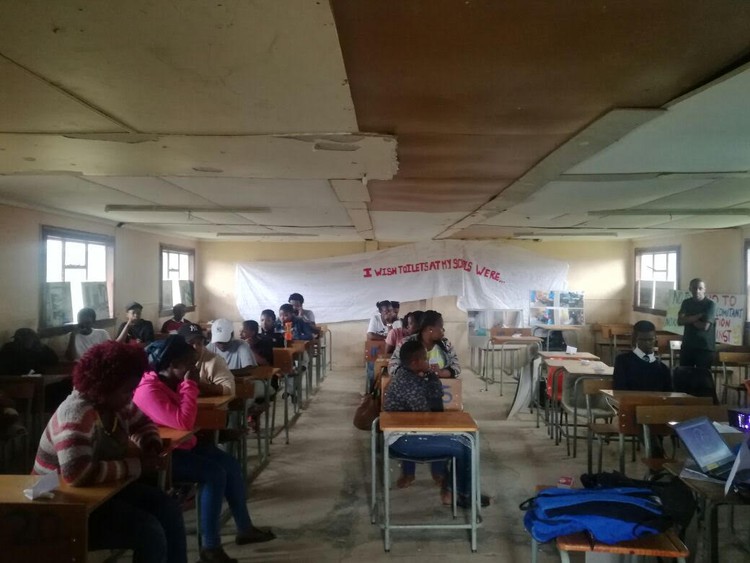 Learners at Vukile Tshwete Secondary School in the Eastern Cape during a protest over poor conditions at the school. Photo: Thembela Ntongana

The #FixOurSchools campaign highlights the conditions of some of the schools in these provinces and demands that the department of education abide by the Regulations Relating to Minimum Uniform Norms and Standards for Public School Infrastructure.

In 2013 a deadline was set for 29 November 2016 for the replacement of schools made of “inappropriate structures”, the provision of basic levels of water, sanitation and electricity to schools. The department did not meet the deadline.

There is money to fix South Africa’s schools but it is not being spent, Equal Education said.

“On the one hand the DBE is not able to implement its own infrastructure plans - for the 2017/2018 financial year, the basic education budget was adjusted by R415 million as a result of infrastructure under-spending,” the organisation said in a statement.

In Gauteng EE picketed at Kwadedangendlale Secondary in Soweto to protest against the failure of the Gauteng provincial government to fix infrastructure that poses an immediate threat to the safety of learners at the school.

EE reports that in October this year, a Grade 8 learner was almost hit when part of the school’s roof collapsed. According to EE the school reported the problem in 2014.

In the Eastern Cape, members of EE and learners from several schools held a night vigil at Vukile Tshwete Secondary School in Keiskammahoek. The school is made out of wood, the ceiling is collapsing, and some classes have no electricity.

Grade 11 student Zenande Silerha walks for more than 45 minutes to the school which used to be an army camp. She wakes up as early as 5am to make sure she gets to school on time.

“I want to learn because I want to become something. But sometimes you walk for more than 45 minutes to school and the teacher tells you they can not teach, because there is water coming into the class or it is cold because there is no electricity,”

“We deserve better than an old army camp. We deserve a school with toilets and windows and proper classrooms,” said Silerha.

Four schools had no functioning toilets and ten of the 18 schools that were visited had no usable toilets (toilets were “in such a poor state that it is unhygienic and undignified for learners to use them”). Not one of the schools visited met the Norms and Standards.

EE also found that less than one in 10 toilets had a door that locked. In 14 of the 18 schools there was no water for washing hands inside or near the toilets; none of the schools had soap or a sanitary bin; and only two had toilet paper. Four of the schools had no water supply while EE visited.

Parents of Michael Komape, who drowned in a pit toilet at Mahlodumela Primary School near Polokwane in 2014 have taken the state to court for damages and to demand that the state provide decent sanitation to schools across Limpopo.

EE has also taken the Department of Basic Education to court to challenge some of the things which EE Eastern Cape head Luzuko Sidimba describes as “escape clauses” in the Norms and Standards. “The department or the minister could simply say the reason why a school does not have electricity is that Eskom did not install it, which will then shift the responsibility to Eskom and that is not what we want.”

“We want the Department of Education to take full responsibility of schools from planning till the school is finished, with water and sanitation and electricity, and we want the court to remove those escape clauses,” said Sidimba.

EE Eastern Cape Deputy Head Amanda Rinquest said the court case was also to compel the department to provide timelines and plans for schools to be fixed.