Activists call for emergency response to violence against women 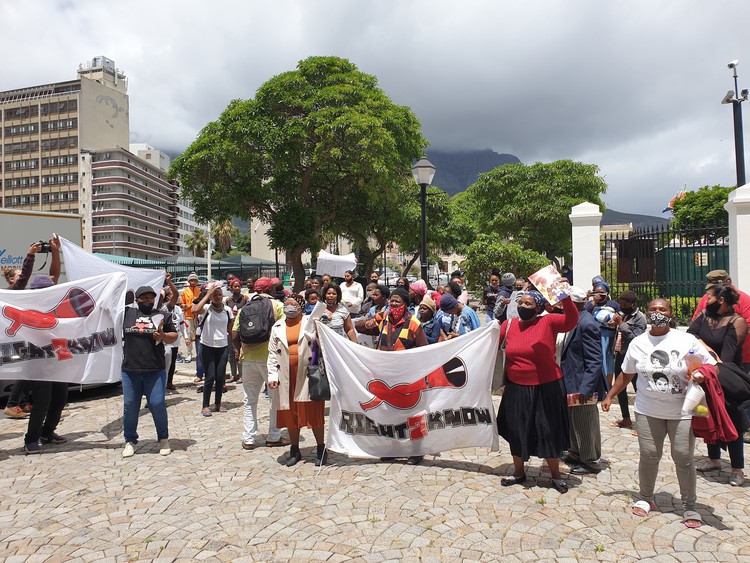 About 50 people picketed outside Parliament on Tuesday against gender-based violence. Photo: Mary-Anne Gontsana

About 50 picketers sang as they waved placards and banners outside Parliament on Tuesday to protest against gender-based violence (GBV).

The picket was organised by the Right2Know (R2K) Campaign. Waving placards written “Stop killing women and children”, “Enough is enough” and “COSATU demands policies on sexual harassment and GBV in all workplaces”, picketers including members of the Congress of South African Trade Unions (COSATU) came from different parts of Cape Town including Wesbank, Khayelitsha and Manenberg.

R2K provincial administrator Nomacebo Mbayo said the campaign started on 25 November, which marked the start of the 16 days of activism against violence against women and children. Mbayo said that during lockdown, the number of domestic violence incidents being reported was alarmingly high.

“There has been little reaction from the government in response to GBV. Government needs to provide programmes that deal with GBV, but also involve communities. Funding should also be provided to projects about femicide and GBV that are being driven by women in our communities,” said Mbayo.

Paul Bester, COSATU Western Cape provincial organiser, said: “Women need to realise that their voice is their strength, the more they speak up, the more men and government will listen.”

Yvonne Hendriks, a resident from Wesbank said: “We are tired of our children being raped and kidnapped. They are too afraid to play freely outside.”

Zandile Matomane from Site B in Khayelitsha said she lived in constant fear for the safety of her three-year-old daughter. “There are many cases of domestic violence and violence in general in Site B. Just two weeks ago a six-year-old was raped in Site B and the perpetrator has still not been found. How do we live in that kind of world?” said Matomane.

In the memorandum, R2K demanded that government, in consultation with civil society, create education programmes to deal with GBV; implement an emergency response plan; that the National Prosecuting Authority, judiciary and the Department of Justice prioritise GBV cases; that GBV awareness be included in the school curriculum; and that a national budget be set aside for gender justice.