“Pit toilets pose a fatal risk to the lives, safety and health of learners” says SECTION27 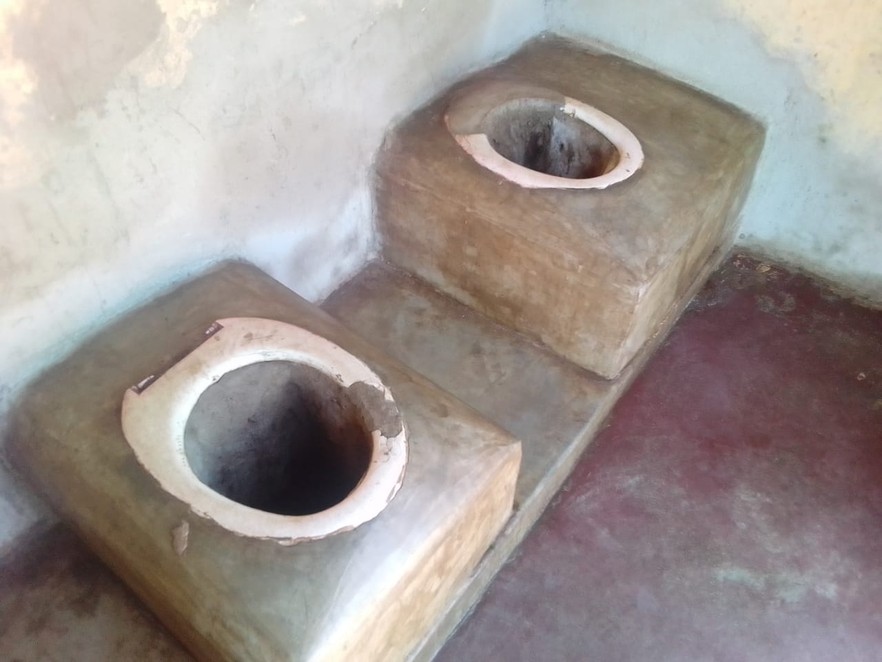 Parents in the Mopani District in Limpopo say they have given up hope that the provincial education department will install safe and hygienic toilets at their children’s schools.

Last year, the High Court in Limpopo handed down judgment in the “Michael Komape trial” compelling the state to provide a list of schools with pit toilets along with plans to eradicate them within 90 days and to report every six months on progress.

Michael Komape was five years old when he drowned in a pit toilet at his school near Polokwane in 2014. His death caused an outrage and put the use of pit toilets in some 1,500 schools across the province under scrutiny. 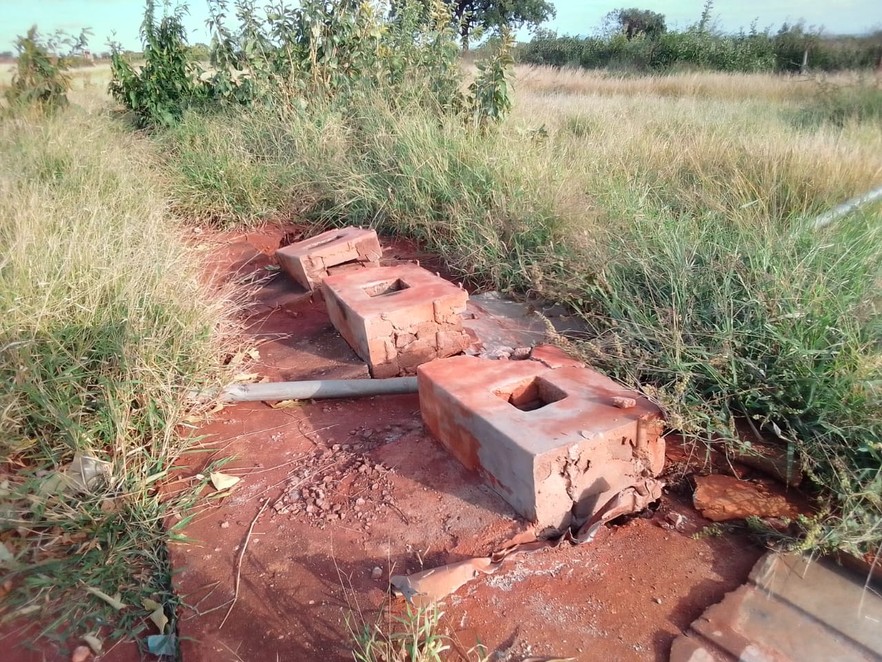 “We tried so many times to speak to the Department of Education to assist us to close these open pits. I just hope nothing bad happens one day because we are dealing with young children,” said principal Shadrack Moshia.

He said the school has 100 learners and four teachers.

Rosina Thele, whose grandchild is in grade 4, said it felt as though the government had forgotten about learners in Mahekgwe.

The school is dilapidated – the roof rusting and windows broken. Meals for learners are cooked in a shack. 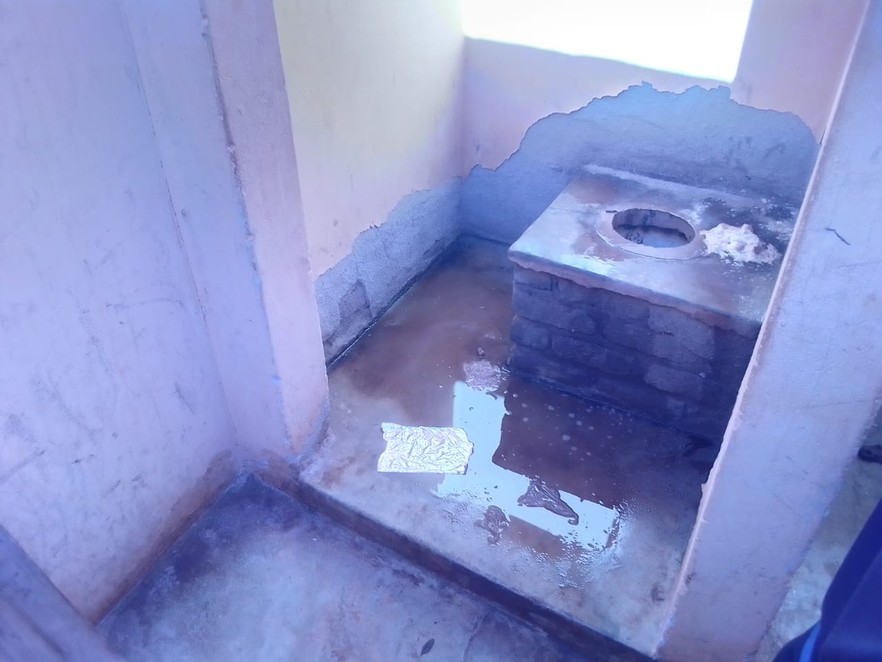 One of four pit toilets used by both boys and girls at Mohookone primary school. There were faeces and urine on the seats and floor of the stalls.

At Mohookone primary school, there were four pit toilets used by both girls and boys. There were faeces and urine on the seats and floor of the stalls.

“These toilets were built by the community years back. The children have been using them for years and we have no choice … New toilets are still being built as you can see,” said principal Frank Itswene, pointing to a construction site on the grounds.

School governing body chairperson Eddie Machete accused provincial officials and MEC Polly Boshielo of “failing us because these are not good toilets for children”. 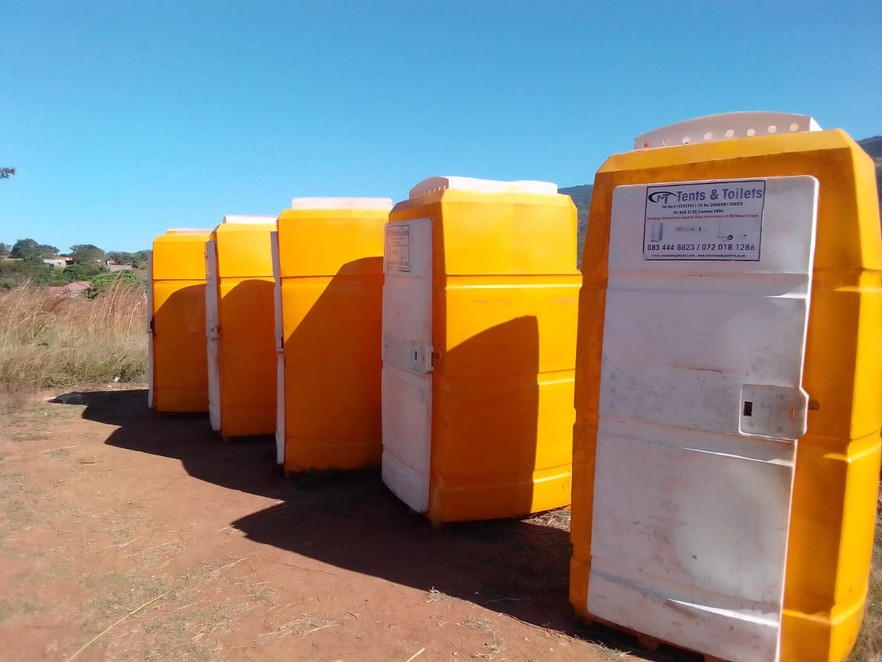 Five mobile toilets at Masokisi primary school delivered in 2020 in response to an instruction under the national State of Disaster regulations to mitigate the spread of Covid.

“When they brought mobile toilets we thought they would be building proper toilets soon but it’s been two years.”

Most of the mobile toilets at the schools we visited were only delivered in 2020 in response to an instruction under the national State of Disaster regulations to mitigate Covid infections and improve hygiene at schools. 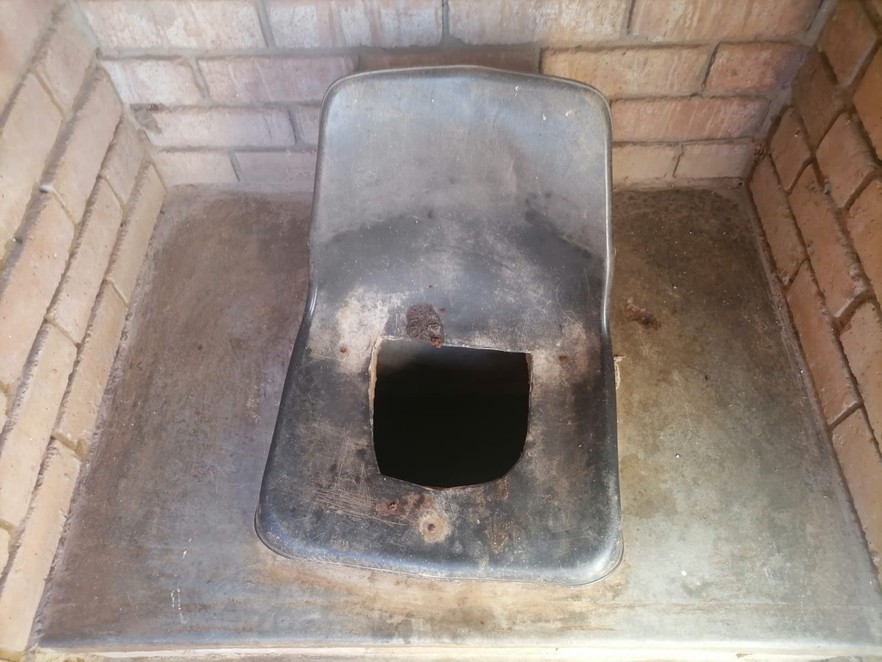 The top of a normal chair seat was cut out and used as the toilet seat for a pit toilet at Mpepule Primary in Lekgwareng, Limpopo.

We were told that the department built pit toilets at Lekgwareng Primary and Mpepule Primary when it built the schools in early 2000.

At Lekgwareng, there are four pit toilets for girls and four for boys. The toilets for boys are without stalls.

At Mpepule, one of the toilets had a normal chair which had been cut to be used as a toilet seat. The seat was covered in faeces.

At Matarapane high school, the toilets, built by the community, were in a bad state. A senior teacher, who asked to remain anonymous, told us that the poor sanitation at the school was a health risk. The seats are dirty and bricks are used to keep some of the toilet seats in place. 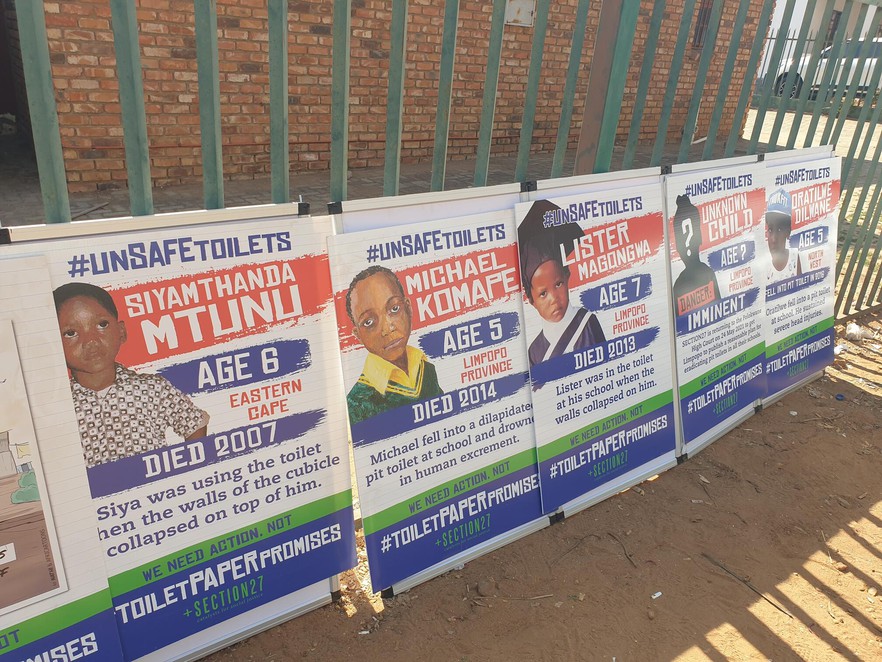 An exhibit showing school children who have died in pit latrines was put up outside the Limpopo High Court in August 2021. Archive photo: Ciaran Ryan

SECTION27 has been in a long legal battle with the state over its plans to eradicate pit toilets in schools. The organisation said the government’s most recent plan to replace these toilets appears promising.

The organisation had previously argued in court that the state’s plans are not clear and are inconsistent with the basic norms and standards for school infrastructure.

“I’m unfortunately unable to share the plan with you at this moment. We are analysing it and will release our own report next week,” said Motheo Brodie of SECTION27.

“It’s extremely concerning that in 2022 learners still have to use unsafe and undignified school sanitation. Pit toilets pose a fatal risk to the lives, safety and health of learners at our schools,” he said.

GroundUp first contacted provincial education spokesperson Tidimalo Chuene on 6 June to ask about its reports to the court on progress to do away with pit toilets at schools. On 7 June, she said: “I need an extension on the deadline to respond. There is information that I ‘m still supposed to receive from our infrastructure team. I will respond as soon as I receive it.”

Following several calls and messages, Chuene promised again on 13 June to respond “as soon as possible”.

Our attempts to get comment since then have been ignored.

According to spokesperson for the national education department Terence Khala, there are 3,701 public schools in the province.

He explained that schools are divided into three categories.

The national department did not answer detailed questions about the toilets at schools we visited but said that R140-million had been allocated to Limpopo in the 2022/23 financial year for the construction of new toilets.