There is a a decades-long battle over Boschendal housing 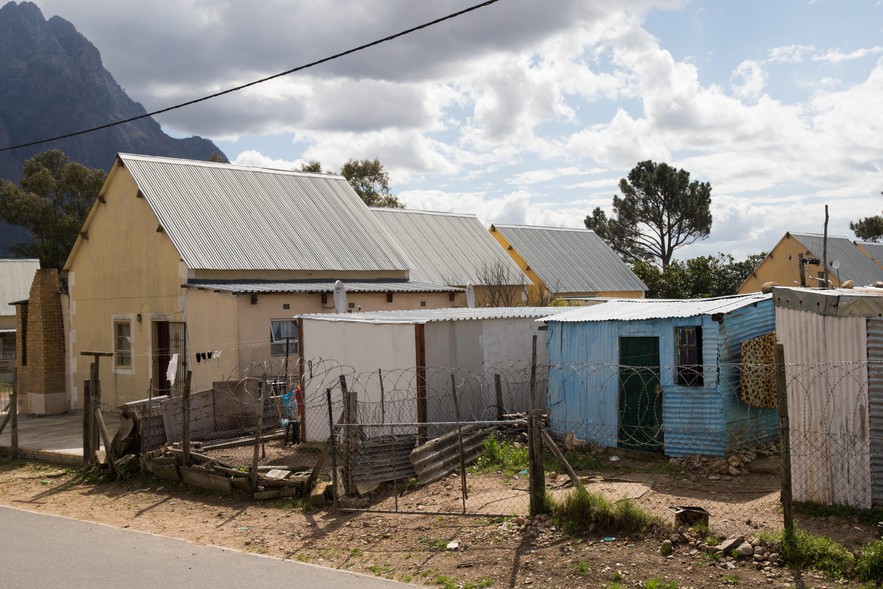 Tensions are high between backyarders and homeowners in Languedoc in the Franschhoek valley after a woman died.

Tensions are high between backyarders and homeowners in Languedoc in the Franschhoek valley after a resident died. Homeowners, many of whom are former farm workers, blame backyarder protesters for making it impossible for the ambulance to reach her in time.

Twenty-three-year-old Languedoc resident Lauren Combrinck died on Monday 26 October following a weekend of protests by backyarders who had erected 15 shacks on a piece of land owned by the Dwars River Valley Community Development Trust. The protests were triggered by the arrest of ten backyarders.

Languedoc residents say the ambulance couldn’t reach Combrinck, who used to work for Boschendal, because the roads were blocked by protesters. She later died at a local hospital after breathing complications. But, like almost everything in this story, this version of events is disputed: there is a counterclaim that Languedoc residents blocked the protesters, which made the road impassable.

This is a conflict over land and houses between poor people: families with long-standing Boschendal employment ties, mostly coloured, and backyard dwellers, some of whom are now also Boschendal workers, mostly black. In the background are government structures with a mandate to provide housing and large landowners, mostly white. Legal advice and non-profit entities are also involved. 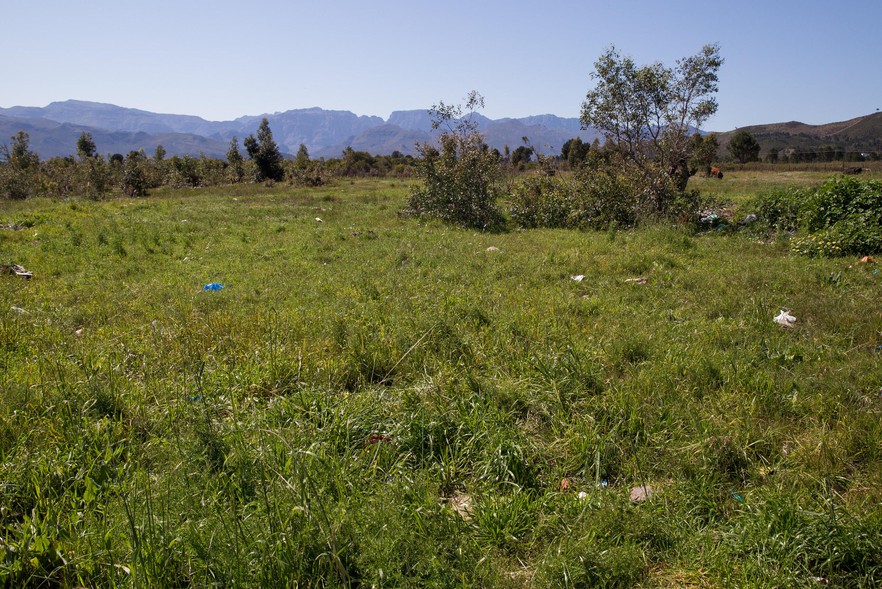 A section of the vacant and contested 14-hectare piece of land, known as Erf10.

The land and housing were compensation for these families being removed from Boschendal after having lived there, in some cases, for generations. Over the years some have started renting out backyard shacks, either to earn income or to house relatives.

The Boschendal Treasury Trust, which later became the Dwars River Valley Community Development Trust, was to benefit from some R120 million expected from the sale of land to small wine estates and the creation of a retirement village, sports club, shopping plaza, a boutique hotel and health clinic.

However, according to Michael Fraser, chair of the trust, many of the sales did not take place; the trust has only received R4.5 million and ran out of money in 2015. As a result no houses have been built on Erf 10.

A source we spoke to explained that rather than sell off some of Boschendal’s land as the prior owners had intended so that a percentage of the proceeds would go to the trust, Boschendal’s new owners had instead invested in farming and hospitality on this land, which had created hundreds of jobs, including for Languedoc homeowners and backyarders.

Fraser said in 2011 Erf 10 had been valued at R44 million and the trust had since been negotiating a sale with the Stellenbosch municipality.

In the meantime, backyarder families have moved onto the land, prompting a clash with the trust. Groot Drakenstein police said the ten protesters had been arrested after a statement by the trust to police.

In 2011, the trust, established to benefit five villages: Languedoc, Kylemore, Johannesdal, Pniel and Meerlust/Bosbou, received support from the Bertha Foundation (a charitable trust with a close relationship with the company that owns Boschendal farm). A community development forum was established in each of the five communities. Two members of each forum were elected by the community to represent them in the trust and serve as members of the Dwars River Valley Advice Office. 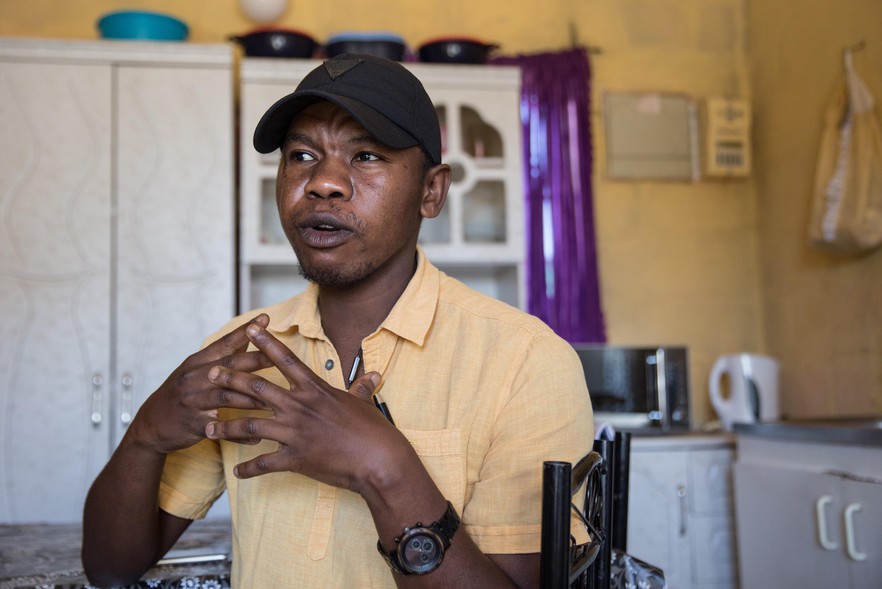 Mbasa Smith, chairperson of the Backyard Dwellers Association in Languedoc.

Chairperson of the Backyard Dwellers Association in Languedoc, Mbasa Smith said the trust had not done enough to push for housing development in the face of Languedoc’s growing population.

“Over the years they’ve done nothing.” Smith said the association had tried to negotiate the right to build shacks on Erf10.

“They took us back and referred to the documentation which indicates that the land could only benefit the people from the five villages of the Dwars River Valley Community. And from those people it’s only the people whose parents worked for Anglo American.”

Smith said the backyarders understood that, but were tired of waiting for houses to be built while unused land was available. “We just wanted them to grant us access and permission to use the land. We are renting, we are seasonal workers and we have to spend six months without work.”

“We said we can’t allow it because the trust deed spells out who the beneficiaries are,” said Fraser.

“The beneficiaries, according to our trust deed, are people that have lived five years prior to 2005 in the Dwars River Valley. Only beneficiaries can benefit from housing opportunities,” he said.

He said the trustees had asked the association to put their plans in writing but they had not done so. “Contrary to what a lot of people think, the power of decisions doesn’t lie with the trust, but with every community, so we have to go back to the community to consult.”

Former trustee Eldred Kleinschmidt said the housing disputes had been sparked in 2003 when only some families had received housing, instead of everyone who worked for Anglo American. Provision had not been made for the children of the families who were moved from Boschendal Farms, he said.

“The land that was sold off by Boschendal, should have gone towards the workers. But now the donated land is owned by the trust to benefit five villages.” 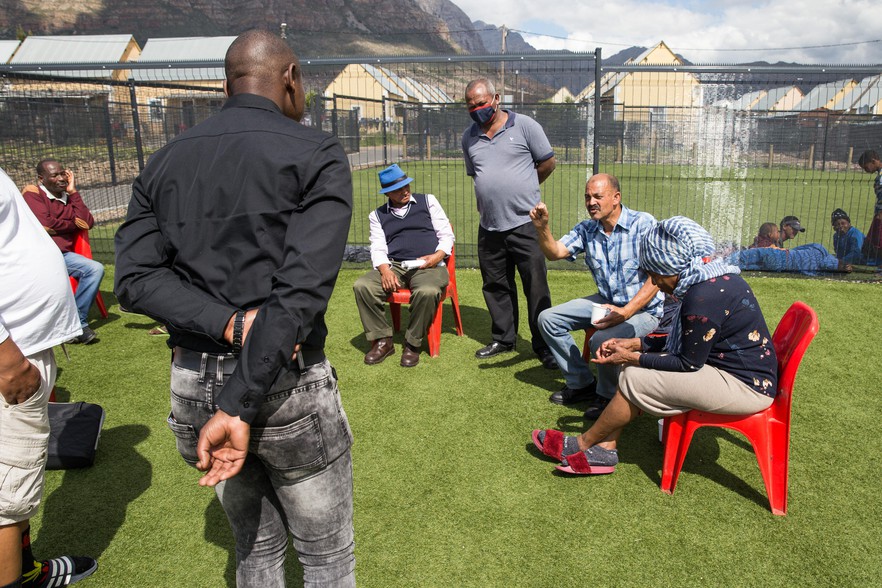 Languedoc residents meet up to discuss issues between backyarders and home owners.

Homeowner Willem Kana, who has been living in Languedoc since 1976, said only homeowners should have a say over the vacant land. “Most of the backyarders think they can speak on the land, but they cannot.”

Zamela Mpahleni, who was one of the beneficiaries of a house in 2004 when Anglo American sold the Boschendal farms, said housing on the empty land was necessary to prevent overcrowding. Mpahleni, who lives with his wife and three children, said: “We were promised that land would accommodate our children to avoid overpopulation that’s currently happening here, but that hasn’t been fulfilled.”

Several residents said that they were not being included in decisions over Erf 10. But Fraser said residents were kept informed of gatherings and chose not to attend. Representatives of the community were responsible for reporting back, he said.

“We call meetings and only ten people rock up. You’ll never reach everyone.”

Fraser said the trust had continued approaching Boschendal Farms “because they are supposed to be a partner in this”.

Boschendal’s Chief People Officer Adele Smith said although it has an ongoing commitment to the trust, the trust did not fall under Boschendal’s authority or responsibility.

Disclosure: GroundUp receives grants from the Bertha Foundation which was founded by one of the directors of Boschendal.

CORRECTION: A bullet point at the top of the article failed to give both points of view over a disputed fact. It has been corrected.