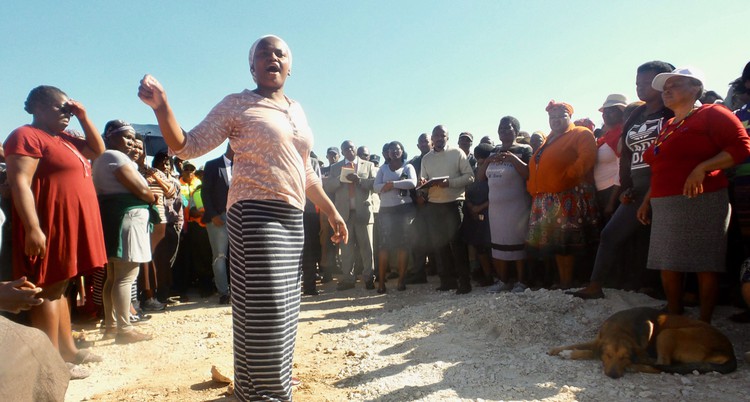 Nelson Mandela Bay Mayor Mongameli Bobani met with residents in Ikamvelihle who have been protesting for weeks over the lack of electricity. Bobani promised the electrification of informal settlements will proceed next week. Photo: Joseph Chirume

Nelson Mandela Bay Mayor Mongameli Bobani has promised that the electrification of several informal settlements will resume next week after the project stalled.

Bobani told residents that the municipality had R200 million for electrification.

Residents asked the mayor why it was taking so long to finish electrifying their shacks when electricity poles and cables were installed early this year in the two settlements.

Andile Lungisa, Mayco member for infrastructure and engineering, had told GroundUp months ago that “all settlements are going to be connected as soon as we finish everything. The contractors are already on sites and we are liaising with communities.”

Xolani Sineli, a resident of Nomakanjani, said, “I hope this area will be electrified and pave the way for the construction of proper houses. I applied for a house in 1994 and reapplied in 2004 but nothing has materialised yet. There is no legal electricity connections here and it’s very dangerous … We suspect corruption with the housing officials. The Hawks should investigate.”

Sineli is unemployed and lives in a shack with his wife and five children.

Nombulelo Tshali, of Asinavalo, said, “We are being accused by people from formal houses of causing power outages by illegal connections. The tension between house owners and residents of informal settlements is reaching boiling point.”

A resident of a formal house in Ikamvelihle, who did not give his name, said power outages caused by illegal connections had left him without electricity for three weeks.

Bobani said, “The technicians have not been able to access the area for the past two weeks because of the violent protests in the area. There are also occasions when they are attacked and robbed while fixing faults. We discourage that because that delays the programme.”

“Work will resume on Monday to finish electrification process that was started early this year. We want to eliminate dark corners so that criminals will be flushed out and arrested,” said Bobani.