Some residents say Steen Villa has become too middle-class 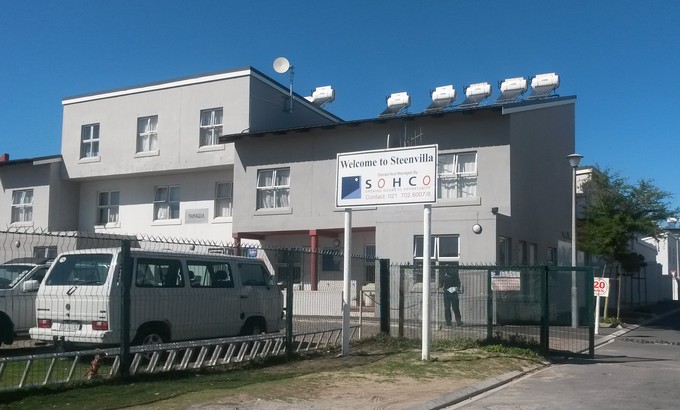 Steen Villa in Steenberg has been cited as an example of successful affordable housing. But there are some tensions. Photo: Barbara Maregele

A group of Steen Villa tenants believe that increased rental fees are forcing poorer families out of the low-cost housing development.

The 700-unit development in Steenberg is the first of its kind in Cape Town. It’s mandate is to provide affordable housing to people on the City of Cape Town’s waiting list for housing. It has been cited as an example of successful affordable housing.

The residents have also accused the developers of conducting “unlawful” evictions, and are concerned by what they believe are high charges for water.

The Social Housing Company (SOHCO), which manages the development, denies these claims, saying that a “small group” of tenants are politically motivated to “spread misinformation” about the development.

The tenants met with Human Settlements MEC Bonginkosi Madikizela last week, who has agreed to investigate their claims. All evictions at the development have been stopped pending the outcome of the investigation.

Steen Villa is a collaboration between the Western Cape Departments of Local Government and Human Settlements, the City, and SOHCO. The development is partially subsidised and partially financed with bank loans.

According to the SOHCO website, the tenant’s income bracket should be between R3,265 and R11,300 per month.

Resident Beryl Schouw, who introduced herself as chairperson for the Steen Villa Housing Action Group, was among the first group of families who moved into the complex in 2009.

Schouw said she pays R2,900 a month for a two-bedroom apartment which she shares with her husband and their three children.

“It all was calculated according to affordability, but we are paying bond rates. We feel that we didn’t get our [government housing] subsidies. They couldn’t have built this development if we weren’t on the housing waiting list,” she said.

“Some of us were homeless, lived in backyards or were renting somewhere else. We were told that this development will be for people who have never owned a home. Now, this has become more for middle class people instead of the poor,” she said.

Schouw said dozens of families have since moved out of the development as they were no longer able to afford the high fees for both water and electricity.

“This was first advertised for people in the income bracket of R2,400 to R7,500. If they wanted this to be for everyone, they should have said so from the beginning,” she said.

“We not saying that we want to live here for free, but we were promised subsidised rentals. The amount we are paying now is too much. Our people can’t afford to buy food for their families as well. We also pay R40 for water per person in a unit. Even a baby has to pay for water,” she said.

Schouw said that management “wasn’t equipped” to run the development.

Another resident Tina Schoor has been assisting tenants with eviction disputes. “People living here don’t know their rights. There have been a lot of unlawful evictions. Many of the tenants didn’t really read their lease agreements. We started noticing that at the end of the month, people’s furniture was at the gate. This started when the development just opened,” she said.

Schoor said that in their meeting with Madikizela they asked for all of the current evictions to be scrapped, pending the outcome of an investigation.

“If it is found that the tenants were wrong then they must be held responsible for it, but I’m sure they’ll find that some of these evictions are unlawful,” she said.

Human Settlements MEC Bonginkosi Madikizela spokesman, Zalisile Mbali said they met and discussed these concerns with the residents and SOHCO.

“It was agreed that the company will investigate each case. We will report back and hold a public meeting. At this point in time it is difficult to pre-empt what will be the outcomes of the investigation.”

Spokesperson for SOHCO, Heather Maxwell disputed the group’s claims. She also said this group didn’t fully represent the views of all tenants. “The subsidy mechanism used in this case does not sit with an individual. The institution holds the subsidy, and in turn makes rental units available,” she said.

Maxwell said residents were still able to apply for a subsidy once they moved out of the complex.

“There is an annual rental increase which is applied on 1 July each year, to deal with inflationary increases in operating costs. Over the life of the complex this has ranged from 6% to 8,2% with the average being about 7%.”

In response to the allegation that they were conducting unlawful evictions, Maxwell said: “We have evicted one person in the period since January 2015 up to now, across the complex of 700 units. This eviction was in February 2015. We obtained more eviction orders than this during the period, but were able to avoid evicting in the other cases.”

She said that from 1 May, they will be charged on a consumption based system for water. “The complex did not initially qualify for free water because of a technicality related to the way the Metro processes bulk and individual meters. This has recently been corrected. This application has just been approved, and the first 6kl of water used won’t be charged on the system,” she said.

Maxwell added that managing a development of this nature required ongoing attention and effort. “Activities like cleaning and maintenance are continuous. The development isn’t so much one development, as home for 700 families or over 2400 people,” she said.