Thousands march against Mugabe in Harare

“He lost the plot and should just go. Enough is enough.” 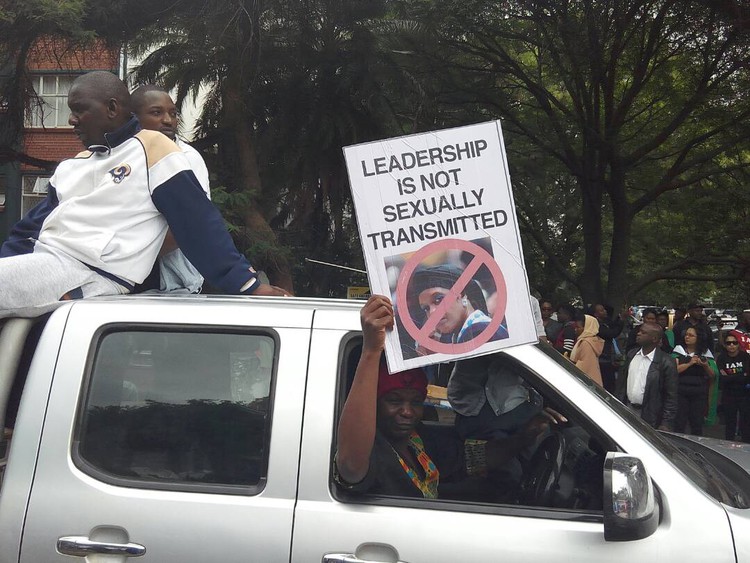 Protesters were united in their opposition to both Robert and Grace Mugabe continuing to rule Zimbabwe.

The main photo originally published with this article was not of Saturday’s protest. We were misled into publishing it. it has been removed. Our apologies.

The rain stayed away as many thousands of Zimbabweans made history on Saturday, taking to the streets to protest President Robert Mugabe’s 37-year rule.

As early as 8am, people from all walks of life, of all colour, started to gather in the capital city in a rare show of unity for a country deeply polarised by Mugabe’s divide and rule politics.

Black and white, Indian and Asian hugged, laughed and walked together from the city centre to the protest venue at the Zimbawe Grounds in the high density suburb of Highfield, in euphoric celebration of a new era.

Zimbabweans abroad - in South Africa, Britain, the US, New Zealand, Australia and elsewhere - expressed their displeasure at Mugabe’s system of governance, holding their own protests.

Many of Harare’s protesters arrived from all over the country in buses, trucks, small cars and even bicycles, to partcipate in the march - the largest ever against Mugabe - called at short notice by veterans of Zimbabwe’s liberation war of the 1970s.

Waving flags, tree branches as well placards denouncing the president, the young, the old, pregnant women and mothers with babies on their backs swarmed the streets.

Cars hooted ceaselessly, others spinned on the tarmac, while most people danced and sang in celebration.

The army and the people fraternised cheerfully. Some protestors perched atop armoured vehicles for selfies.

Many others showered the soldiers with praise for taking action against the president.

“This is independence at last from Mugabe,” a protestor told GroundUp.

“That’s why we are on the streets today, to celebrate and show support to our army for saving us from this [Mugabe] family that has treated our country as a family business.”

Mugabe was placed under house arrest when the army seized control on Tuesday.

Army officials have denied the takeover is a coup. Instead they claim it is a temporary measure to root out “criminals” surrounding the president.

Mugabe is said to have been resisting pressure by the military to step down. He is seeking guarantees of immunity from prosecution for he and his family once he resigns.

A meeting with the Zimbabwe Defence Forces commander General Constatino Chiwenga together with two envoys from South Africa on Thursday didn’t yield much fruit.

Participants in Saturday’s march will be hoping this is the final step needed to end Mugabe’s rule.

“I am doing this [protest] for my unborn child and the future of the next generation,” said a protester. “We appreciate what Mugabe did for the country, but he lost the plot and should just go. Enough is enough.”

In the city centre, many people gathered at Robert Mugabe Square (also known as Freedom Square) as others headed for the Zimbabwe Grounds.

There appeared to be confusion around midday, when some protesters took the decision to march on the State House, Mugabe’s official residence. But they were turned away by soldiers, telling the crowd to head for Zimbabwe Grounds, instead.

At the Zimbabwe Grounds, politicians from across the political divide, united against Mugabe and his wife Grace, took turns to take potshots at the 93-year old leader.

Those of his own Zanu PF party, who a few days ago supported him, blasted the president.

Here is what they said:

Although he was booed, former Finance Minister Patrick Chinamasa called for Mugabe’s resignation and the arrest of Grace Mugabe.

While lauding the army for stepping in, Water and Climate Minister Oppah Muchinguri Kashiri chanted that Grace Mugabe is a “thief and criminal”. She urged protestors to march on State House to “remove Mugabe and his bastard wife.”

War Veterans Secretary General Victor Matematanda said: “We are not starved of leadership. Mugabe and his wife should go.”

Movement for Democratic Change second vice president Nelson Chamisa thanked freedom fighters for leading the way and promised to work with the veterans “to make sure this change is not reversible.”

In an interview, renowned protest Pastor, Evan Mawarire, said: “The dream is alive. Words fail me. Zimbabwe is back. Thank you my fellow citizens. We did not suffer for nothing.”

The crowds started to leave the Zimbabwe Grounds at about 3.30pm, headed first for Robert Mugabe Square and then onto Blue Roof, Mugabe’s private home. At the time of writing, many protesters have dispersed but some are continuing to protest.

It’s not clear yet if this is Zimbabwe’s “Arab Spring”, but today Zimbabweans showed that they have the courage to march for their freedom.

In Cape Town about 300 Zimbabweans gathered at the Zimbabwean Consulate. They called for President Jacob Zuma and the SADC governments not to interfere in the unfolding situation in Zimbabwe. They joined together, irrespective of political affiliations, to call for Mugabe to go. Movement for Democratic Change, Tsvangirai (MDC T), ZANU PF, Freedom Justice Coaliation of Zimbabwe and Democracy Restoration Party supporters were present.

They had first gathered at the Grand Parade but Law Enforcement told the group they had to disperse by 11am. They then marched in groups of 14 to the Zimbabwean Consulate [Groups of 15 or more are considered a gathering, although there is considered legal opinion that no permission is needed for spontaneous political protests. - Editor]

“President Jacob Zuma should stop interfering with what is going on in Zimbabwe. I remember very well sometime back he said Zimbabweans should solve their own problems. This is exactly what we are doing. What is wrong today? We are overthrowing President Mugabe’s government peacefully,” said Professor Mapendere, a UWC student.

Mapendere said he is prepared to go home when Mugabe steps down. “I never thought I would come study here in South Africa. Zimbabwe used to be an education hub but [Mugabe’s] regime destroyed everything. Now that I believe there is going to be a change I am prepared to go and give back my education to our economy,” he said.