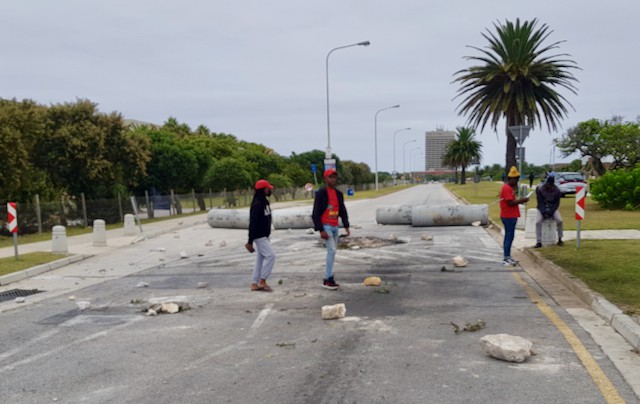 Lectures were brought to a halt on Monday, the first day of the academic year at Nelson Mandela University (NMU) in Gqeberha, by students protesting over difficulties with registration.

Entrances to the Gqeberha campus were barricaded and the George campus was also disrupted.

She said these included a “lack of sufficient accommodation, a poor registration process, the failure by the National Student Financial Aid Scheme (NSFAS) to clear students so that they get their allowance.”

“For a student to register successfully they need to receive an SMS from NSFAS confirming their status. Many students haven’t been cleared. NSFAS came to the university last week but the meeting was fruitless.

“The situation was made worse when the university opened for late applications when they were aware that they didn’t have enough space for new students. That gesture was just a facade meant to portray the university as if it cares for the students,” she said.

She said the SRC supported the struggling students, but the shutdown had been led by the Economic Freedom Fighters (EFF).

EFF student leader Yiva Makrwede said, “We decided not to continue with lectures while black and poor students are being denied their right to education.”

“I never thought that this will be my welcome to university. It is a nightmare for me,” a student from East London told GroundUp. “I am stranded with no money for transport to my aunt in New Brighton who has been taking care of me while awaiting registration.”

He said there were about 2,000 students “with higher certificates who still need clearance” despite having received their SMSes.

The university’s media manager Zandile Mbabela said in a statement that “huge strides” had been made in registration “evidenced by the more than 25,500 students who are presently registered”.

“There remain a few outstanding issues that will hopefully be addressed by NSFAS this week … The University remains resolute in its commitment to ensure access to academically deserving students,” said Mbabela.

Mbabela said, “Classes were conducted through online platforms … Staff and students were advised to work and study remotely.”

On Tuesday morning Mathambeka said that on Monday night demands “in terms of things the university can control” were met and that the “university is now awaiting NSFAS to act fast.”

The university issued a statement on Tuesday morning saying it had held a series of positive engagements with student representatives at its campuses in Gqeberha and George.

It said that the entrances to the university’s North, South and George campuses had been cleared and were open for access, and it trusted that “the institution will progressively retain normalcy as the 2022 academic year gets under way”.

But the EFF said it would monitor NSFAS’s commitment to clear all returning students during the week, and if this was not achieved that they would “render the university ungovernable”.

The story will be updated with comment from NSFAS when it is received.