“No amount of love can heal an abusive man” 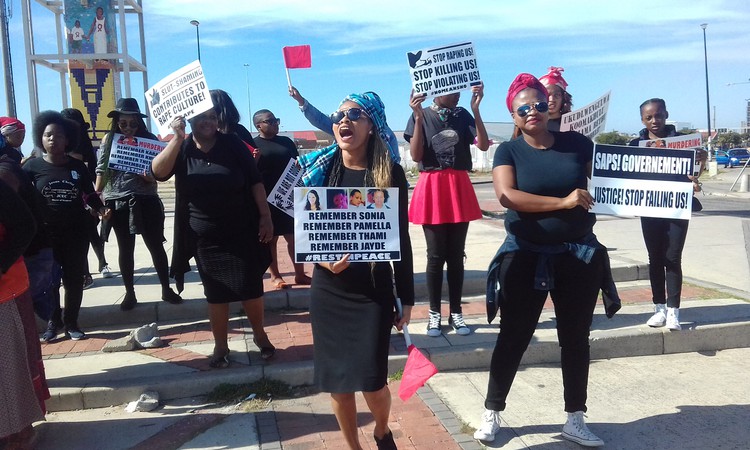 Marchers dressed in black to mourn the loss of their freedom at a march in PE on Women’s Day. Photo: Joseph Chirume

Women in Port Elizabeth on Wednesday marked Women’s Day by appealing to senior government officials, including President Jacob Zuma, to lead by example.

The women, all dressed in black, complained that women abuse and rape had escalated under the Zuma administration. They said he should not be allowed to address women’s gatherings because he was doing little to protect women.

Speaking at the Ngesi traffic circle in New Brighton, Vuyolwethu Saliso, 32, of the Khanyisa Ikamva Project, said: “Women are being abused everywhere, in their homes, on the streets and at their places of work. Top government officials are becoming chief culprits.”

“All these abuses are happening under President Jacob Zuma’s watch. Also Police Minister Fikile Mbalula is active on social media discouraging crime, yet he is silent on Deputy Minister of Higher Education Mduduzi Manana, who confessed to beating a woman last week in Gauteng. When is Mbalula going to arrest his colleague, Mr Manana? This reinforces the argument that there is selective justice in this country.” [It has been reported that Manana has since appeared in court. - Editor]

Saliso said she had been physically and psychologically abused 12 years ago. She had only revealed her experiences last year. She said verbal abuse was the most common form of women abuse.

She explained, “Girls are not free to walk in the streets because abusive boys and men call them bad names. If they report to the police, nothing happens to the abusers. Verbal abuse is documented as a crime in our constitution.”

Saliso continued: “Abuse is everywhere and happens even in wealthy homes. However, it is worse in marginalised communities and townships. The degree of silence in these communities is shocking. I urge girls and women in abusive relationships to end those relationships before it’s too late. No amount of love can heal an abusive man. Leave now that relationship before you are killed.”

Nomonde Fanele, 51, of the United Front, another grassroots organisation that deals with social problems in Port Elizabeth, said the women had dressed in black to mourn the death of women’s freedom. She said: “The poverty in our communities is affecting women more than men. Men end up abusing desperate women because they are poor. We are here to tell the world that there is no need to celebrate when women are being raped, killed and locked into forced marriages. Drugs and gangsterism are also aggravating abuse of women.”

“Our government is not doing enough to address these issues,” Fanele said.

“Teach your sons about respect and consent. Don’t teach your daughters about not getting raped,” read the message on some of the posters.