Drug offers new option for patients with TB and Aids 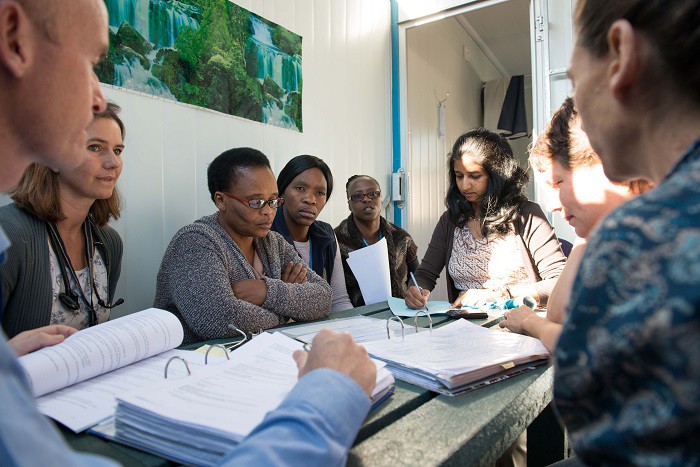 Some patients with Aids who also have TB and a very low CD4 count begin antiretroviral treatment hoping to get better. But they get sicker, temporarily at least.

This is called paradoxical TB-IRIS (Tuberculosis-Immune Reconstitution Inflammatory Syndrome). Starting antiretroviral therapy begins restoring the immune system, but this can lead to an exaggerated inflammatory response against disease. The patient might have new or worsening symptoms of TB such as fever or lymph node enlargement.

In a recent trial in Khayelitsha patients with HIV and TB were given a medicine called prednisone for four weeks in the hope that the steroid would reduce the likelihood of paradoxical TB-IRIS in high risk patients. The results of the trial were presented by the lead investigator Professor Graeme Meintjes at the annual Conference on Retroviruses and Opportunistic Infections (CROI) in Seattle.

Prednisone has been used in an earlier trial for the treatment of TB-IRIS, but in that trial it was only given after the patient had symptoms of TB-IRIS. It had good results: prednisone reduced the symptoms and the amount of time patients were hospitalised.

In the PredART trial of 240 patients there was a “significant reduction” of 30% in TB-IRIS cases in those who took prednisone.

Prednisone is a steroid, in particular a corticosteroid. It is used to treat many different conditions such as allergic disorders, skin conditions and asthma

120 of the patients were put on prednisone and the other 120 on the placebo, both for four weeks. Both groups received TB treatment then antiretroviral therapy. They were followed for a year after. Five deaths occurred in the prednisone group by 12 weeks and another 4 in the placebo group (a small difference that is almost certainly due to chance). In both groups, there were nine patients who were not followed up.

About 47% of the patients in the placebo group developed TB-IRIS compared to 33% in the prednisone group. This difference is unlikely to be due to chance, and so is almost certainly due to prednisone being effective.

There were also only 17 patients who were hospitalised in the prednisone group versus 27 in the placebo one, but Meintjes said that this did not reach statistical significance (in other words it might be due to chance).

The trial selected HIV-positive patients who had not previously had antiretroviral therapy and had a CD4 count of 100 or less (a very low value, which means they had advanced Aids). People with very low CD4 counts are at higher risk of developing TB-IRIS.

Steroid use in HIV positive patients has been associated with increased infection as well as a type of cancer called Kaposi’s sarcoma, said Meintjes. Therefore this was monitored during the trial. But the result of the trial shows that the prednisone was well-tolerated with no excess risk of infection or cancer. A likely reason, according to Meintjes, why risk wasn’t increased for these complications was that all patients were on antiretroviral therapy.