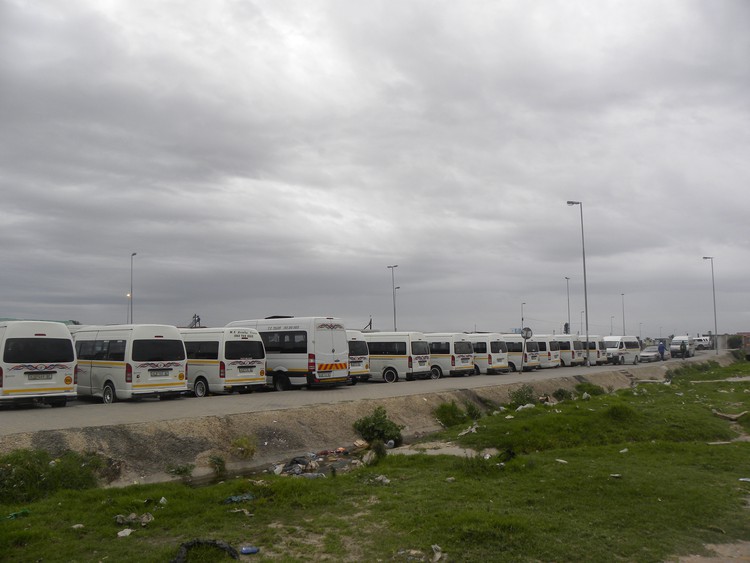 Taxis were parked at the Crossroad taxi rank in Motherwell on Wednesday as the strike got underway. Photo: Joseph Chirume

By Joseph Chirume and Chumani Mazwi

Social grant payments were disrupted in parts of the Eastern Cape on Wednesday as taxi associations went on strike, blocking roads and pulling passengers out of vehicles.

The taxi associations accuse Transport MEC Weziwe Tikana of failing to address what they say are long-standing grievances.

Several cars were reportedly damaged and one person injured when a vehicle was stoned in Kwazakele.

Eastern Cape South African Social Security Agency (SASSA) spokesperson Luzuko Qina said the strike had affected cash payments of social grants in the former Transkei area. Police had advised SASSA to postpone payments because of the risk of transporting cash during the strike.

“If the strike is not finished by tomorrow, then it will have serious consequences on our payment system. We plead with recipients to be patient because the situation is beyond our control,” said Qina.

The strike by the taxi umbrella body, the South African National Taxi Association (SANTACO), also affected commuters and learners who depend on scholar transport. The Eastern Cape Department of Education said the matric trial examinations had been postponed in order to protect the safety of learners and staff.

Urban bus companies such as the Algoa Bus Company suspended their services for safety reasons as their buses had been attacked during previous strikes.

SANTACO Eastern Cape chairwoman Noluntu Mahashe said the association had held several discussions with the MEC where grievances had been tabled. But the MEC was not taking the taxi association seriously, she said.

“We have a problem with scholar transport. We entered into a contract to carry a certain number of learners, but parents of learners often force our drivers not to leave a learner even when their taxis are full. This leads to traffic officers issuing tickets for overloading to the driver. The department should issue permits for more taxis.”

“Learners should have tags to show who qualifies for scholar transport to avoid overloading. We also need an increase in the taxi fares because the petrol price has increased. Prices of fuel and vehicle parts are increasing on a daily basis but our taxi fares are not. All these grievances have been with the department for many years,” said Mahashe. “She is doing nothing to address them. We will continue with the shutdown until we get a positive response from the MEC.”

Department spokesperson Unathi Binqose said numerous discussions had been held with the taxi operators. “The fuel hike is affecting not only taxis, but everyone.”

Binqose said the issue of higher fees for scholar transport was under discussion.

Binqose said his department was in talks with the education department to build hostels for learners.

“We are busy considering all options and our door will remain open for discussion.”

Police spokesperson for the Motherwell Cluster, Captain Andre Beetge, said, “There were cases of people blocking roads by burning tyres and throwing stones along Uitenhage Rd. Taxi drivers forced a truck driver to block the N2 Freeway with his truck. He was robbed of his two cellphones and a GPS. He managed to run away. A case of business robbery was opened. Violent cases were also reported in Kwazakhele with people throwing stones at police.”

A driver for the Animal Welfare Society was injured when the company bakkie was attacked in Kwazakele, according to general manager Hannes Stander. “The driver was injured in his eye and body after the crowd damaged the car. He received medical attention,” Stander said.

Commuters were left stranded along the R61 between Mthatha and Ngcobo.

Commuter Siliziwe Tyali said, “I couldn’t go to work today because of the strike. I am worried that I might get a warning at work.”

Taxi owner Ntsikelelo Kibido, of the Border Alliance Taxi Association, said he was concerned about the fuel price increase. “I am not going to be able to maintain my cars and I still have to put food on the table for my family,” he said.