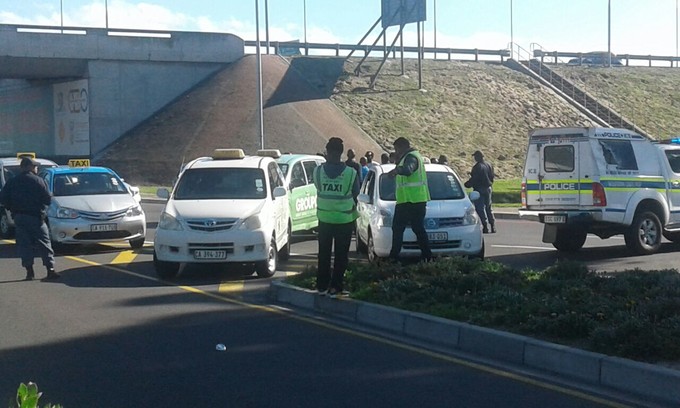 Metre taxi drivers have closed the road to Cape Town International Airport and forced passengers out of Uber cars. Uber drivers have reacted by going offline. They are fearful of violent attacks and that their cars will be burnt.

Police vans blocked the road too, and police were in discussions with both metre taxi and Uber drivers. They advised Uber drivers to leave the airport. A group of men was seen attempting to lift an Uber vehicle.

Uber announced two weeks ago that it was going to allow drivers to take cash fares. Drivers warned that this would cause conflict with metre taxis.

A Cape Town Uber drivers’ WhatsApp group is a flurry of voice notes and messages warning drivers to be careful. (The group is trying to form a union for Uber drivers and consists of over 200 people. Many Uber drivers are dissatisfied with their work conditions.)

Passenger Romanda de Bastos was pulled from her Uber into a metre taxi. She told her mother, Lita, that she saw the Uber driver being kicked. He was then driven off in his vehicle. Romando was distraught, worried that the man might be killed. UPDATE: The driver was assaulted. His license disk was stolen. He is shaken but okay.

Stranded riders could be seen walking to the airport.

Uber spokesperson Samantha Allenberg said, “We are aware of the situation and we are speaking to the authorities and relevant stakeholders to ensure this is resolved quickly. Drivers have a security number they can use should they feel unsafe at anytime.”

An Uber driver said, “Guys, I just told a client I can’t take her to the airport. She was crying she is going to miss her plane. All Uber drivers are cancelling her.”

UPDATE 21:10 - Uber has urged GroundUp to update our article to inform the public that the route to the airport opened again many hours ago.

This is a breaking story. It is being updated frequently as facts are clarified.