The taxi driver who keeps his own street clean 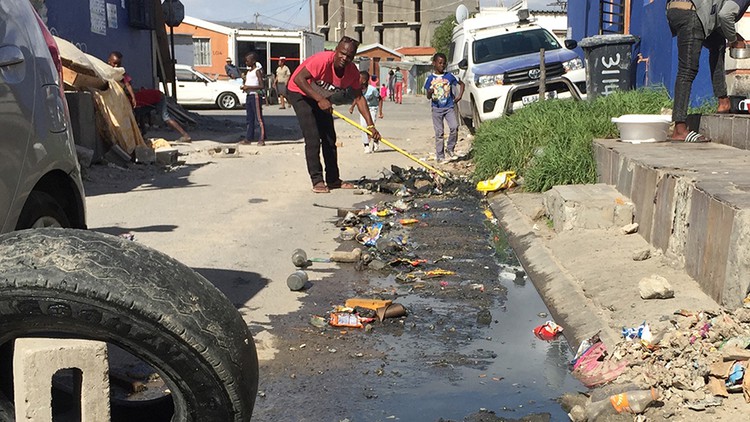 A part-time taxi driver has taken it upon himself to clean a filthy kasi street with vigour and pride.

Yamkela Ncume couldn’t stand the accumulating filth and stagnant grey water in Dunoon’s Gousbloom Street, so he started cleaning it himself.

Armed with a rake and a shovel, and sometimes just with his bare hands, he removes all domestic refuse and filth accumulating in the street.

Residents along the street praise Ncume for his selflessness.When GroundUp visited the area on 10 April, Ncume was cleaning the stinking rubbish.

“I love my community and I want to keep our street and environment clean. Refuse accumulates very quickly here because of overcrowding, and we have young children constantly playing in the street. If we wait for authorities to come clean for us, kids will pick up germs, ” Ncume said.

Nokuphuwa Pitane, 35, praised Ncume for his selfless service to the residents living on the street.

“He is doing the right thing. Many young people of his age are on drugs but he is not. He cares about our hygiene. My only wish is for him to get a permanent job,” said Pitane, who is the mother of two small children.

She said Ncume cleaned the street once a week but refuse piled up again quickly because of overcrowding.

“All residents share in the responsibility to keep their areas clean.”

“The City provides a highly reliable refuse collection service, as well as 25 drop-off sites where residents can dispose of up to three 1.5 ton bakkie loads of waste per day for free. Residents are encouraged to report illegal dumping to the City on 0860 103 089”, she said. — WestCape News for GroundUp