Water leak outside his house has not been fixed since 2018 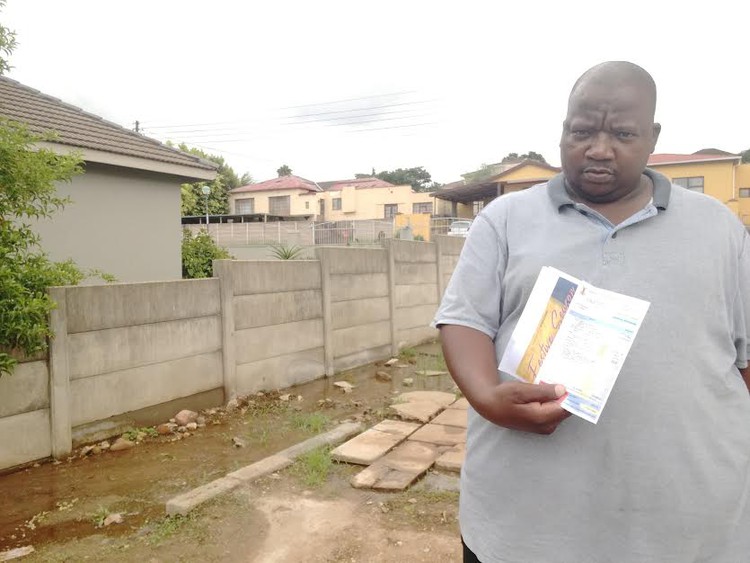 Lubabalo Vesele holds his R68,000 water bill. Behind him water is leaking into the ground. Photo: Thamsanqa Mbovane

The Nelson Mandela Bay municipality says resident Lubabalo Vesele owes R68,000 for water. But Vesele says he has been complaining about a water leak outside his gate since 2018.

He is one of several Uitenhage residents who say the municipality has failed to fix water leaks and instead has slapped them with huge water bills.

“Since 2018, I had been reporting the urgent matter of a water leak in my yard to the municipality,” says Vesele. “However the officials kept giving me different reference numbers instead of coming to fix the leak.”

Vesele lives alone in his house. He is a taxi driver, out of his house for ten hours a day.

He said even his house walls had cracked. “In 2019, I had to hire a bricklayer to mend my walls to avoid possible caving in.”

There was so much water in his yard that a construction worker kept drawing water to use on building sites in the area.

“My yard was like a dam. And upon enquiring from the municipality as to why my water bill kept increasing month- to-month, the officials said they would in 2019 send a plumber who dealt with rusty meter boxes from a private company to change the meter box. But it didn’t happen. Instead the meter box is now buried under green grass in my yard.”

His water bill now stands at R65,000. “It was R68 000 but I paid R3,000 in December, as I was threatened with a cut-off. The municipality cut of my water account several times last year and I had to pay R400 in reconnection fees.”

Another resident, Magamase Sitoto, of KwaNobuhle township, has also been told she owes the municipality R65,000 in water bills. The water leak at her house was finally repaired after GroundUp wrote about it, but the bills keep coming.

“This is daylight robbery. I won’t pay it. They must tell me why I suddenly owe them thousands of rands as a pensioner who is unable to have that kind of money.

Asked how many people owed large amounts to the municipality for water and what the total debt was, municipal spokesman Mzobanzi Jikazana said he could not disclose this. “Such information is private.”

“If a resident is unhappy with a water bill, they should take statements and positive identification to the customer care,” he said.