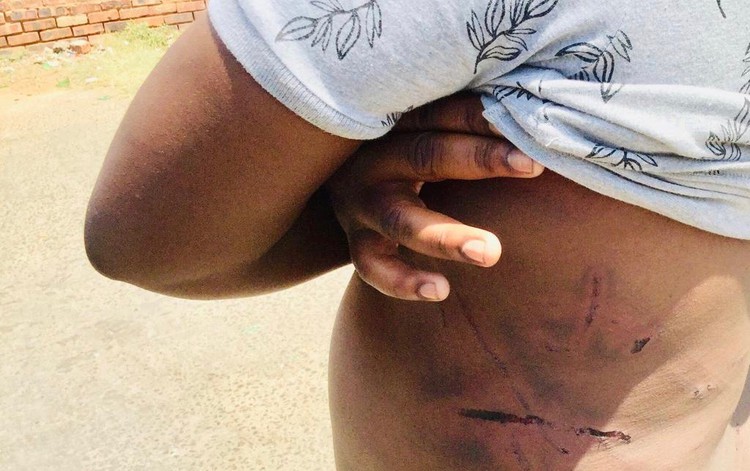 One of the immigrants who was beaten up last week shows his wounds. Photo: Kimberly Mutandiro

“We are living in fear. We do not know when they will strike next,” says Ashley Johnson.

Johnson, a Zimbabwean living in Pretoria, is nursing wounds after being attacked at a shop by a group of men who told him they were cleaning up drug dealing on behalf of Pretoria taxi associations last week.

According to witnesses, such attacks have happened three times in the last month. The men, who according to witnesses arrive in cars marked with the names of taxi associations, have been targeting shops along Eskia Mpahlele Drive where many foreign nationals spend time.

“They claim to be doing a cleanup operation against drug dealers but the surprising thing is that they always take money, phones or anything valuable they can find,” says Johnson.

He says they accused him of selling drugs, grabbed him by the collar and pushed him out of the shop where he and his friends were spending time together.

Johnson is a cross border trader who buys and sells goods in South Africa and Zimbabwe.

“When l told them that l was not a drug dealer, they became even angrier and searched my pockets taking out the R500 l had. They accused me of getting the money from selling drugs.” Johnson says one of the men pocketed the money and continued beating him. “They only let me go after l screamed in pain. My ribs still hurt even now.”

Johnson says two of his friends who were also beaten are recovering at home.

He says he has previously seen the men take people to a back room in a nearby block, where the victims say they are beaten. Witnesses say they have seen some of the attackers at taxi ranks around Pretoria.

Nineteen-year-old Leeman Andire says he was one of those beaten with a sjambok last Wednesday. He showed GroundUp some wounds on his neck and back. Andire, who lives in Zimbabwe, says he was sent by his family to South Africa to buy stock for a motor spares business they operate back home. He was having a meal with his brother when the men pulled him out of the restaurant.

“They said they wanted to teach me a lesson for selling drugs.” Andire says he was taken to a room in the next block where he was beaten, searched and robbed of R4,000 and his cellphone.

“l was bleeding badly from sjambok wounds. When they finished beating me they told me to be on my way.” He says he reported the matter to the police.

Jay Asinie, the owner of one of the shops, says he saw some of his customers being taken away.

“The men came in a car with the name of a taxi association on Wednesday. Everyone saw them. They threatened my customers and took them away,” he says.

“These are people who are using law as an excuse to rob us. Many of us have lost money or cellphones to these people,” says John Madamombe.

Tapiwa Kambarami says he managed to get away on Wednesday when some of the men tried to catch him. “We do not understand why we keep being attacked. I do not sell drugs and neither have l ever stolen a job from anyone. I am self employed.”

Kambarami owns a metered taxi which he operates around Pretoria.

“What wrong have we done that we should be tortured?” he asks.

Soshanguve Taxi Association spokeswoman Gloria Lekalakala said: “The Association knows nothing about the people going around assaulting immigrants. Our chairman has advised that the assaulted people report to the police.”

Several attempts on Friday and Monday to reach the SA National Taxi Council were unsuccessful.

This article has been amended to include comment from the Soshanguve Taxi Association.