Municipality fails to explain why taps have run dry 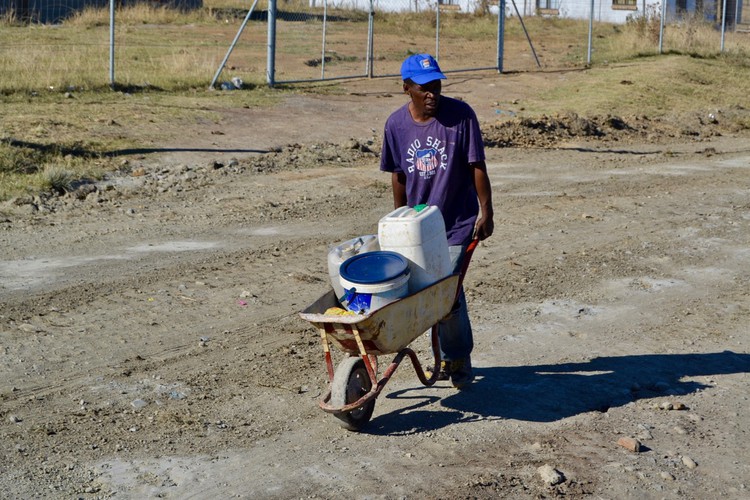 Residents from Makhazi Village in Mooiplaas, outside East London, say their taps ran dry four months ago. They said there hasn’t been any proper explanation from their ward councillor or from the Amathole District Municipality. They don’t know when the situation will be fixed.

When GroundUp visited the vilage, we found a group of women washing clothes in a river nearby. The river is also used to collect water for cooking and drinking. While the parents washed cothes, children prevented cows from drinking in the river.

Some residents walk four kilometres with wheelbarrows to fetch water from other villages. Other residents have hired a tractor and pay R500 for three 60-litre drums of water.

Resident Nowethu Kolisi said ward councillor Zolani Nzuzo couldn’t give them an answer. “We are all in the dark on why our taps are dry and the municipality is not doing anything to assist us.”

Kolisi fetches water from the river. “We share this water with pigs and cows and we do not have a choice. This is the only source of water,” she said. Kolisi goes as early as 3am to the river before her husband leaves to herd cows in the morning.

Phuthumile Yawa walks four kilometres to Isilatsha Village to fetch water. He does this almost every day, sometimes three times a day depending on his need for water. On his wheelbarrow he can carry three 25-litre buckets.

A 65-year-old woman who identified herself as Madlamini said she has to hire a young man with a wheelbarrow. He charges her R20 for a 20-litre bucket of water. She looks after her two grandchildren, aged six and nine.

Community leader Thembinkosi Ndamase said he does not know why there is no water in the taps. He said he saw a municipal truck delivering water to another village on 9 July, but he has never seen it again.

“Last week we had a meeting with the ward councillor. We asked him about this shortage of water. All he said is he will inform the municipality, and he does not know why we do not have water,” said Ndamase.

GroundUp contacted Nzuzo who said he also does not know why there is no water in his ward.

Municipal spokesperson Siyabulela Makunga did not respond to questions sent to him last week. GroundUp has contacted him several times since and each time he promises to follow up the inquiry but he never calls back.