Taps run dry in the village of Mandela’s childhood home

Municipality failed to pay Eskom so pump station was switched off 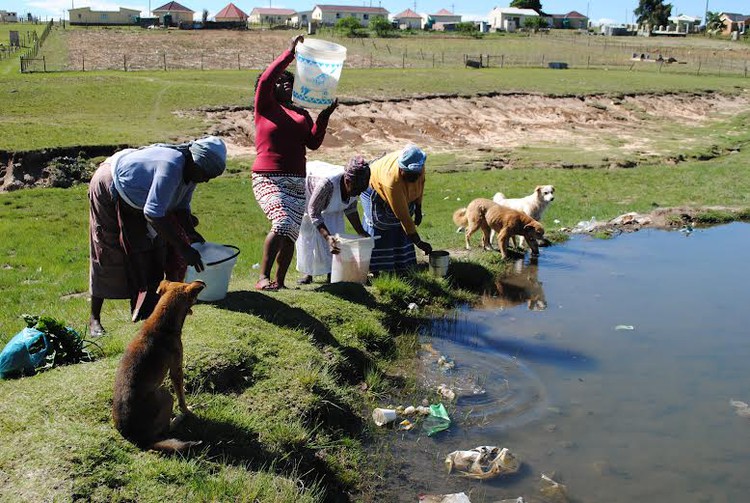 Villagers whose taps have run dry have to share dirty water with lifestock and dogs. Photo: Mkhuseli Sizani

Villagers in Nelson Mandela’s childhood village in the Eastern Cape have been without tap water for eight months because the OR Tambo District Municipality failed first to pay Eskom and then to fix a faulty valve on its water reservoir.

Villagers say the water supply to their taps has been erratic for years and stopped completely eight months ago. To get water they have dug a small dam around a local spring, which they share with animals.

Qunu is under the King Sabata Dalindyebo Municipality but its water affairs are administered by the OR Tambo District Municipality. Both are ANC-led municipalities.

Nophelo Gangathele said, “For eight months we haven’t had water in our taps. As you can see for yourself we are drinking water with dogs, pigs, sheep, goats, horses and donkeys.”

“It is so disappointing because in this ward we are all ANC members. We voted for the ANC because we respect Madiba. But the current leaders, when we ask them about our water problem, say they have given up because they are also not getting help from the municipality,” she said.

Nokuzola Tetani was born in the village and has had a tap since the 1990s. “But in the last two years we started to experience water outages. In 2020 the problem escalated. There were times where we had no water for two weeks or a month.”

Tetani has had to shut down the Qunu Heritage B&B in Lwalweni which she owns.

“For three months it has shutdown because of this water crisis. My clients want to use a shower, not bath from a plastic bath. Last week I cancelled four bookings. This is a great loss for me because I used to get about R5,000 a month.”

“It is always a queue at that spring because hot summer days have started. Last week, everybody was queueing for water with carts and big drums.“

“We never suffered like this when Madiba was still alive.”

Lifa Dingani, a grade nine learner from Milton Mbekela High School and his brother Lilulo were doing laundry next to the fountain.

“We don’t have enough time to focus on our studies because we have to come here and wash our school uniform and other clothes,” Lifa said.

Nomfesane Ngxekana, who works as a domestic worker, says she has to come three times as day to fetch water with a wheelbarrow. “I still cry for Tata Madiba because this problem would have been sorted immediately if he was still alive.”

We never suffered like this when Madiba was still alive.

Ward 19 councillor Unathi Daniso (ANC) said, “Initially our pump station was switched off by Eskom due to unpaid water bills by OR Tambo Municipality. But after that was resolved, the reservoir operations manager said an outlet valve was damaged and hence there is no water supply to the taps.”

Daniso said he had gone to the District municipality offices to ask for water tankers. ”But I was told that there was a shortage of trucks, hence people drink this dirty water,” he said.

Zimkhita Macingwane, spokesperson for OR Tambo District Municipality said, “There was a challenge of water outages in the area because of an electricity issue between us and Eskom. The matter was later resolved and water was restored to the community and the community had water access until recently.

“The recent water outage is caused by a faulty valve that we have ordered. Once it arrives we will fix the system. We urge communities to contact our call centre on 0475019106 so that we can assist them with water carting.”

She did not answer GroundUp’s questions about the absence of water tankers.