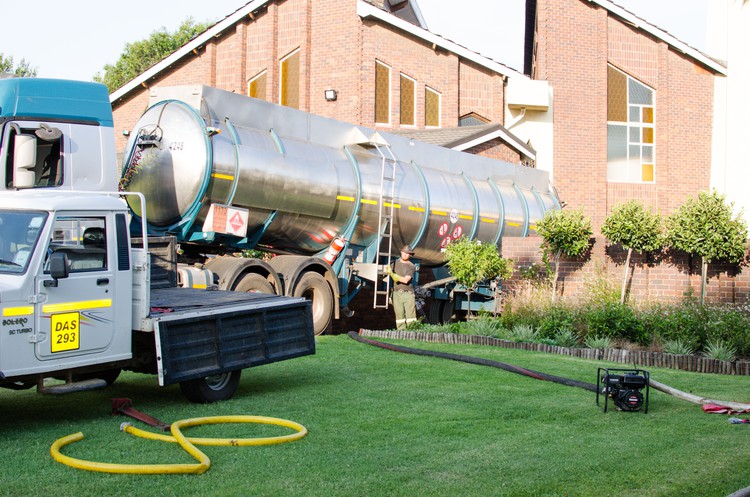 Bethal residents are dependent on trucks to supply water because the municipality failed to pay the water bill. Photo: Ciaran Ryan

The taps ran dry in Bethal, Mpumalanga, in December when Rand Water Board reduced water pressure by 40% for non-payment of an R87.7 million back-bill owed by the Goven Mbeki Municipality. More than half the town is reckoned to be without water.

Residents are furious because they have paid their water bills, and want to know what the municipality has done with the money. Many suspect corruption is at the root of the problem.

Last Wednesday students at the Jim van Tonder School in Bethal were sent home because there was no water for showering, toilets and drinking. The town’s abattoir has also shut down. Hennie Rademeyer runs an ice factory in the town and he has had to shut his business down because he cannot get water.

Residents are planning a march on the municipal headquarters next week to protest maladministration and the apparently cavalier attitude displayed by the mayor and senior city councillors to the water crisis in the town. Groundup attempted to contact the mayor by phone and text but no reply had been received at the time of going to press.

Local businesses and residents have stepped into the breach, delivering bowsers and trucks of water to different parts of the town. Water is decanted from the trucks to smaller containers for delivery to outlying areas.

“We have effectively taken over the job of the municipality,” says Michelle Rademeyer, a Bethal resident who plans to stand for election as ward councillor in May on a campaign to clean up the town’s administration. She laid charges of theft and corruption against city officials, but local police say she has no proof, so no case number has been issued. The next step is to get the Auditor General to probe the city accounts and see why it has been unable to pay its bills. Another step being planned is to place the municipality under administration, and force the province to take over its day-to-day management.

The Rademeyers organise emergency, water and other services through a Whatsapp group. “People contact us before they contact the municipality for help,” says Hennie.

Local Freedom Front Plus counsellor for the municipality, Aranda Nel-Buitdendag, says the Goven Mbeki Municipality (GMM) agreed to pay Rand Water Board’s December monthly charge of R24 million plus another R10 million towards the arrears, but only managed to pay R17 million.

Nel-Buitdendag is also a member of the municipal public accounts committee, which has asked for documentation relating to contracts signed by the municipality. “We were over-ruled by the ANC members in the council, so the documents we requested were only partially delivered. Our job is to look into irregularities involving contracts and tenders, so we have effectively been sabotaged in doing our jobs. Of course, residents suspect foul play when they pay their bills yet the municipality gets cut off.”

Things could get even worse for Bethal residents, as there is a danger Eskom will cut electricity at the end of this month for non-payment of arrears.

Rand Water also reduced water pressure at Mpumalanga’s Victor Khanye Municipality, this time by 60%, for an outstanding bill of R86 million. The areas affected include Delmas, Botleng, Eloff and Sundra.

A local Secunda newspaper, The Bulletin, reports there are suspicions that some have capitalised on the town’s misery by capturing unmetered water from a newly installed water hydrant and selling it to the Department of Human Settlements. There are also complaints that some parts of the town have water while others do not. Entrepreneurs have jumped on the crisis to profit from selling bottled water and pumps. Ironically, this has been a bountiful rainy season, but none of this is showing up in the taps of Bethal.

On a visit to the town GroundUp found broken water pumps, cut electricity cables, empty reservoirs, pot-holed roads and angry residents. Here is a town that appears on the brink of shut-down.

Section 11 of the Water Services Act says a water services authority “may not unreasonably refuse or fail to give access to water services to a consumer or potential consumer in its area of jurisdiction.

“In emergency situations a water services authority must take reasonable steps to provide basic water supply and basic sanitation services to any person within its area of jurisdiction and may do so at the cost of that authority.”

Residents of Bethal believe their best hope is to pressure the local authorities through protest action. “It’s a shame the municipality has done nothing to keep us informed about the state of the water supply to the town,” says resident Philip Brits. “Some parts of the town have water and others not. Why can they not turn the taps on in different parts of the town and share it?”

It’s a question that other residents of Bethal have been asking themselves for several weeks.