Ilembe District Municipality intends to solve the problem by 2024 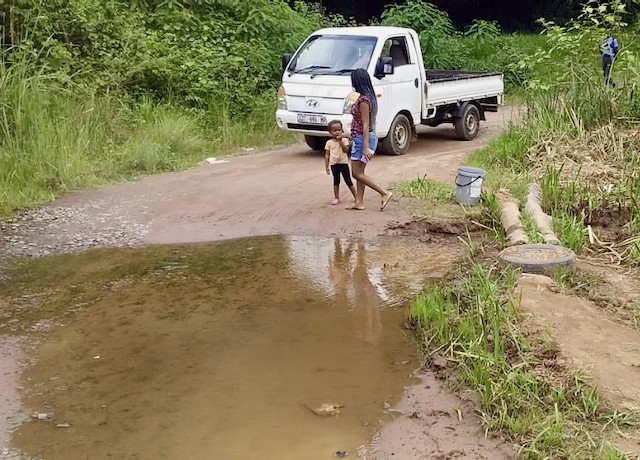 Philiswa Dindi fetches water from a stream that runs through a gravel road. Photo: Nokulunga Majola

Hundreds of residents in rural Ndwedwe, north of Durban, have not seen water coming out of their taps for six years, nor do water tankers reach them in some areas.

Thokozani Sibiya, from Kwamnyanda in ward 13, said it takes her an hour to fetch water, and the stream is also used by goats and cows. She boils that water before drinking it.

“The problem is that when we threaten to protest, you find the next day that there is water. [We don’t know] what exactly the problem is, because nobody is telling us anything,” said Sibiya.

Phumulani Ngobese, from Sonkombe in ward 14, said he doesn’t understand why there is a crisis when the dams are full.

In its latest status report, the provincial water department said four out of five dams that are part of Umgeni Water Supply System had benefited from recent scattered rainfall and are at 81.2% capacity.

“I know for a fact that wards 12, 13, 14, 15, 17 and 18 have water issues, but it’s worst in ward 13. It’s not like there are no water tankers providing water; there are, but they don’t reach all the areas and sometimes they come after two weeks.” At such times Ngobese uses the stream.

He blamed tanker water shortages on people with Jojo tanks, who he said were hoarding water and paying the water tanker operators.

“Another thing is that drivers who are not familiar with the area don’t reach all the areas. Government must provide a permanent solution to this crisis,” said Ngobese.

He said some streams are drying up and it will get worse in the coming months. Ngobese also said, “When people threaten to protest, then they switch on the water. What’s stopping them from switching it on every day?”

Cingisa Mbola, Senior Manager for Technical Service, Ilembe District Municipality, said no district municipality officials were involved in switching water on or off. The problem was that Umgeni bulk water supply to Ndwedwe was currently delivering three million litres a day short and it can’t supply the whole reticulation system.

She said they currently have 17 water tankers (ten owned by Ilembe and seven hired) costing R1.5 million a month.

Mbola said the district municipality has built two two-megaliter reservoirs, upgraded some secondary bulk infrastructure (two pump stations, nine kilometres of pipeline, and replaced five reservoirs in wards 10 and 11, 13 and 14) at a cost of R39 million.

On top of this Umgeni Water is upgrading its pumping infrastructure to the tune of R35 million to be able to deliver the additional three million litres to Ndwedwe.

In addition, the Umgeni’s Umshwathi scheme will be “fast tracked” and when complete will supply bulk water to the entire Ndwedwe area, said Mbola.

It will only be completed in 2024. (Only the first of six phases are currently complete.)