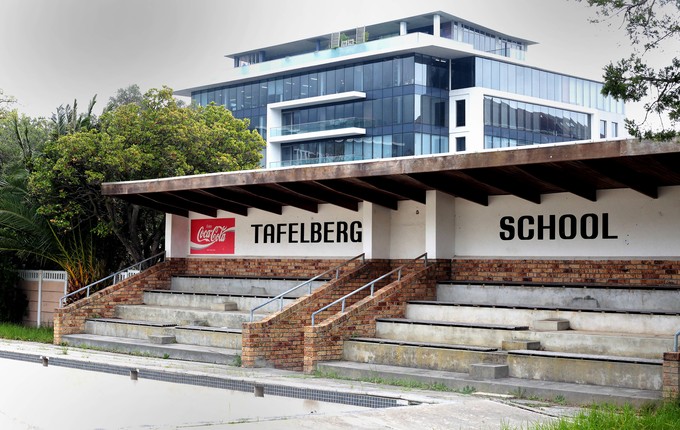 According to the Western Cape government, 270 residential rental units for households earning under R7,500 a month could be built on the old Tafelberg school site. This is according to the government’s feasibility study on affordable housing for the site released today.

The release of the study comes after housing activist organisation Ndifuna Ukwazi had a sit-in at the provincial public works department earlier this week, demanding that the study be published.

The development would include commercial, retail and community facilities. The possibility of keeping the existing school building as a school is also proposed. There is also the possibility of refurbishing the Wynyard Mansions apartment block that is on the property. These units would not be part of the affordable housing component.

Jared Rossouw, the director of Ndifuna Ukwazi, called the study a “breakthrough model” that “brings the province to the brink of an unprecedented decision: to begin dismantling apartheid spatial design in Cape Town.”

“It looks like a substantial commitment towards building the first new affordable housing in the inner-city since the end of apartheid,” said Rossouw.

In the model, money for the project would come in the form of the Social Housing Regulatory Authority restructuring grant and the Institutional Housing subsidy, totalling just over R71 million. The Western Cape government would need to give just over R9 million as an equity contribution to make the social housing model viable.

The total construction costs are estimated at around R113 million, with a bit more than R40 million expected to be made in sales of retail and community facilities. The earnings from rental of residential units minus operating costs and bad debt considerations is estimated at about R50 million.

Using this model, an approximately 14% return on the project before tax is expected.

The study comes after a long running battle over the site. Housing activists were fiercely opposed to the province selling the site to Phyllis Jowell Jewish Day School for R135 million, instead of building affordable housing.

Ndifuna Ukwazi took the Western Cape government to court in an attempt to halt the sale. In court, an agreement was reached whereby the public was able to submit comment on the Tafelberg site for an extended period.

The feasibility study comes following a cabinet resolution taken in August this year that called for financial modelling to be done.

Rossouw believes that in light of this model, “it is untenable for province to sell Tafelberg off to a private entity”.

“We anticipate that this financial model will face objections and dissent from powerful interests in Cape Town - most notably from private developers who have profit-driven agendas for our public land and many wealthy residents who do not want to live alongside poor, black people,” said Rossouw.

Despite this, he sees this as an opportunity for Premier Helen Zille to “plot a steady course to fulfil her commitment towards a more inclusive Cape Town and Western Cape Province”.

Correction: The subtitle of this article originally said 270 units planned for low-income households on Sea Point property. The word “planned” was changed to “proposed”.