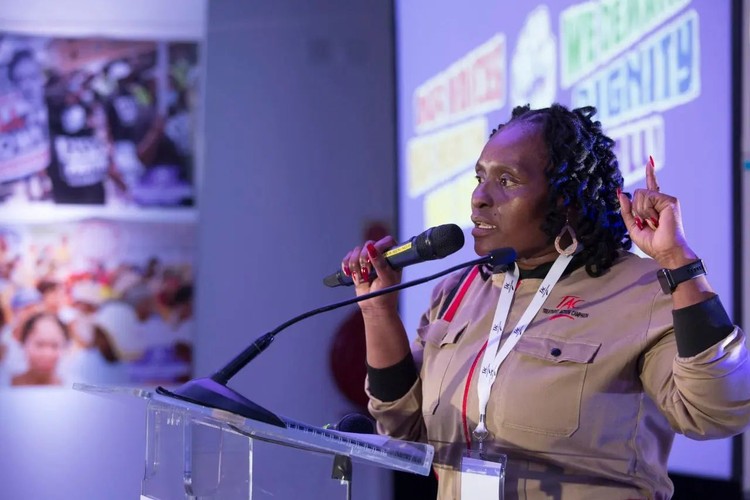 Chair of the Treatment Action Campaign Sibongile Tshabalala called on the government to speak out on medical xenophobia. Photo supplied by TAC

Health minister Joe Phaahla came under fire at the Treatment Action Campaign (TAC) congress for his refusal to talk about xenophobia in the health system after Limpopo Health MEC Phophi Ramathuba’s remarks about immigrants.

A video of Ramathuba complaining about immigrants using healthcare went viral on social media last week. She was berating a Zimbabwean patient in the video.

But Phaahla said he would not comment on the issue when he addressed the TAC congress in Benoni at the weekend.

Newly re-elected chair of TAC Sibongile Tshabalala said: “The issue of medical xenophobia: we cannot keep silent and not talk about it. We are still seeing problems affecting people on the ground.”

“Minister, it is wrong for us to discriminate against one another. We’re calling on government to speak out.”

Tshabalala also called on the minister to give attention to vacant posts in the health system and to shortages of ambulances across the country. She said every province in the country now had a problem with emergency medical services.

“Vacant posts of health workers affect us on the ground. Our people wake up early in the morning and queue long periods for medical attention,” said Tshabalala.

“Women’s rights are still being violated everyday, especially when they are giving birth. They give birth on floors.”

In his address, Phaahla said the Covid-19 pandemic and lockdowns had caused a backlog in the rollout of HIV/AIDS treatment.

“Many people have regressed on their treatment, and lives have been lost. We have an agreement with the South African National AIDS Council (SANAC) to work harder to eradicate AIDS. We’re also rolling out the welcome back campaign to address the backlog, ” said Phaahla.

He said the department is currently training “frontline” health workers.

“We have completed this training in three provinces. We have a lot of work to still do. The pandemic pulled us back a bit, ” he said.