TAC calls for Roche to drop price of cancer drug

Activists say that with generic competition trastuzumab could be R3,500 per course instead of the current price of over R200,000 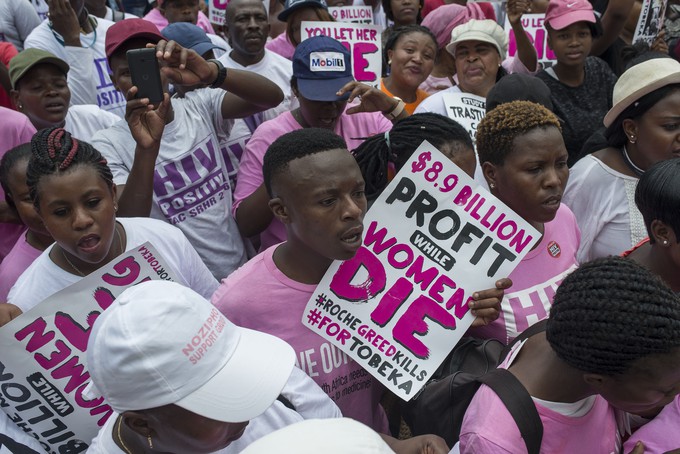 Tulani Daki cried as he described to hundreds of protesters outside the Johannesburg office of pharmaceutical company Roche how his mother Topeka Daki died of cancer.

Tobeka was diagnosed with HER2-positive breast cancer in 2013. She died in her home in the Eastern Cape on 14 November 2016. A drug called trastuzumab manufactured by Roche might have helped her survive, but it was unaffordable.

“How many women must die because of the greed of Roche?” asked Daki. “I’m very angry. My mother was not rich and just because of that she was denied access to the required treatment.”

The protesters included women living with breast cancer. Many held up placards calling for justice for Tobeka.

Trastuzumab is recommended by the World Health Organisation as an essential medicine for the treatment of HER2-positive breast cancer. According to a statement by the Treatment Action Campaign (TAC), which organised the protest, clinical trials have demonstrated that providing trastuzumab in addition to chemotherapy, improved the survival of women with early or locally advanced breast cancer by 37%.

Lotti Rutter, campaign manager for the TAC, said trastuzumab is too expensive for the majority of people in South Africa. “In the private sector it can cost over R500,000 and in the public sector over R200,000 [for a six month course] … So this means that the government, which runs the public health service, does not want to procure the drug because it is so expensive,” she said.

Rutter said that health economists have shown that the price of trastuzumab could be reduced to R3,500.

Babalwa Malgas traveled from the Eastern Cape to attend the protest. She wore a pink shirt which bore Tobeka’s face. She too is living with HER2-positive breast cancer. “My life is at stake because of the patent rights given to this pharmaceutical company. I couldn’t get access to the medication because money is more important than my constitutional rights and my life,” she said.

A memorandum handed over to Roche management demanded that the company drop the price of trastuzumab so that all women living with HER2+ breast cancer can access it. The protesters also demanded that Roche cease litigation against companies producing similar versions of trastuzumab, and that the company stop extending its patent period on the drug. The TAC argues that with competition from generic companies the price will come down.

Aadila Fakier of Roche’s public policy and communications department signed and accepted the memorandum. She said she noted the concerns of the protesters and that Roche would continue to engage with the relevant stakeholders including government on this issue.

“Roche has been in negotiations with the Department of Health over the past year to improve equitable access to trastuzumab in the public sector. We have offered the Department of Health a significantly reduced and cost-effective treatment option. This option supports the testing of breast cancer patients in the public sector, and if positive for the HER2 gene, makes trastuzumab available for the treatment of these patients. A final agreement has however not yet been concluded,” read a statement released to the media by Roche.