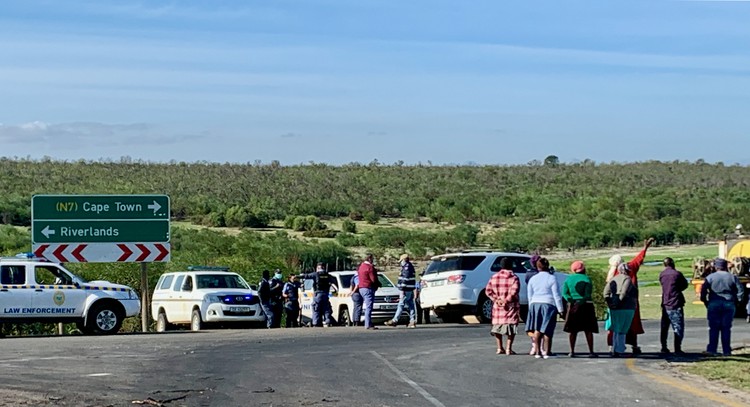 Protests started on Sunday over a lack of basic municipal services, electricity and sanitation.

On Wednesday, GroundUp followed about 200 protesters along Riverlands Drive. There was a heavy police presence with a dozen police vans, including a police nyala. Suddenly we heard the sound of gunshots and tear gas canisters being fired into the crowd.

The South African Homeless People’s Federation, made up of people desperate for land for housing, purchased the Groene Rivier land in 2008 paying R500,000 for it. The sale is still being contested in the Western Cape High Court, a dispute involving the two previous owners.

Phindiswa Thombela, a member of the federation, used to rent a shack behind an RDP house in Dunoon’s section 28. She said there were more than 2,000 families now living on the farm and there are no toilets and only one standpipe for potable water.

“People are building their own brick houses. When we ask for basic municipal services, the Swartland Municipality says we still have a case in the Western Cape High Court. As such, they can’t provide us basic services. We are fed up with this response … We have relieved ourselves in the bushes for the past six years,” she said.

Phumza Lobi used to stay in Gugulethu and settled in Silvertown in 2014. She said they only had access to a mobile clinic twice a week and the school was far away.

While speaking to Lobi, there were gunshots and white smoke from teargas canisters could be seen a kilometre away from the informal settlement.

Among those demanding electricity are high school learners at Ilinge Lethu High in Malmesbury. Grade 10 learner Ayabonga Sobayi said he was being left behind in school work as they need to access education materials on television and the internet, but they had no electricity.

Western Cape SAPS spokesperson Captain Frederick van Wyk said that since Sunday night at approximately 8:30pm there were sporadic incidents of public violence in Silvertown. The unrest continued throughout the day and night until Wednesday.

Van Wyk said there were reports of stone throwing, burning tyres and damage to an Eskom transformer. He said the resulting power failures had led to clashes with the Chatsworth community and Silvertown residents.

“Since Sunday night action was taken to disperse the different crowds. Allegations were made by the community of people that were injured during the incidents but no cases were reported to confirm these allegations,” he said.

“We are urging protesters to carry themselves in an orderly manner that does not infringe on the rights of others. Police and other Law Enforcement Agencies continue to monitor the situation,” he said.

The Swartland Municipality’s director of corporate services, Madelaine Terblanche, said Silvertown is situated on private agricultural land outside the urban edge of the Swartland Municipality, where people have settled illegally over a period of six years, erecting either formal or informal dwellings on ‘plots’ that have been sold to them illegally. Some on Gumtree, she said.

“The Municipality has been part of the lawsuit by the private landowner for the eviction of the illegal squatters who initially started out as 52 households. To date the matter has not been finalised by the court, and pending the delayed outcome of the eviction application, the number of dwellings and households in the settlement has increased dramatically and accordingly also a demand for the provision of services and infrastructure by the municipality.

“Since the land in question is not municipal owned, and has not been declared a formal township, the municipality is not in a position to provide formal services to the area and must further await the court’s ruling,” said Terblanche.

Terblanche said the community has since 2014 had access to water via a standpipe erected by the municipality.

“A further two standpipes, as well as a water tank, were erected before lockdown commenced. Refuse is removed from the area from a central point. As indicated, the installation of formal services is dependent on the court’s ruling,” she said

She said Swartland was attempting to schedule a meeting with representatives of Silvertown to discuss their demands, along with other stakeholders, including the landowner and Eskom.