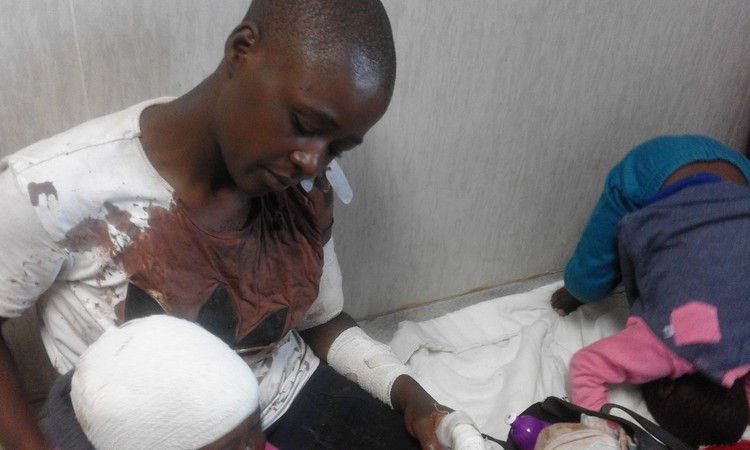 Medusa Mamvura survived a bus accident that killed 13 people on Monday, 6 May. She was still wearing her bloodstained blouse in Louis Trichardt Hospital a day after the accident. Photo: Bernard Chiguvare

Survivors of the crash that claimed 13 lives in Limpopo on Monday say the driver was tired and the bus was overloaded.

The Marsmery bus was travelling from Pretoria to Harare, Zimbabwe, when it overturned on the N1 north, near the Ingwe Hotel in Louis Trichardt.

According to Makoma Makhurupetje, Limpopo MEC for Transport and Community Safety, the cause of the accident is not known. In a statement after the crash he explicitly said “reckless driving is not ruled out as the possible cause”.

Survivors visited by GroundUp on Tuesday say the driver arrived early in the morning after a long journey and set off again at once. Medusa Mamvura, who was still wearing her bloodstained blouse when in Louis Trichardt Hospital a day after the accident, says the crash could be a result of driver fatigue.

“We were supposed to leave Pretoria on Sunday (5 May) for Zimbabwe but that was not the case. We had to spend the whole night waiting for the bus until Monday morning. The bus arrived around 5am on Monday. The drivers did not rest. We loaded our goods and off we left for Zimbabwe. We were not happy going back with the same drivers and insisted on being refunded but that fell on deaf ears,” said Mavura.

Her two-year-old child sitting next to her had bruises all over her face.

Another survivor, Ruramai Torima, sitting in a wheelchair, said: “At a weighbridge before Polokwane the driver was told the bus was overloaded. We do not know what happened for us to pass overloaded like that.”

But a supervisor who works at the weighbridge (but wasn’t on duty that night) told GroundUp that if the bus had been overloaded, it would not have been allowed to continue.

Torima said, “As we passed Louis Trichardt towards Messina there was a steep slope and the bus was speeding, leading to the loss of control. All I can remember is crying for help and at the same time pulling my child out from under the seat.” Her child was not hurt.

We have called the Marsmery landline in Pretoria (012 656 0537) several times, but it goes through to voicemail. We obtained a cell number from the company’s Facebook page. The person who answered said he did not work for the company but gave us another mobile number to call. A man, who identified himself only as Brighton, answered this second number but he said he was no longer employed by the company. He also claimed the bus was not one of the Marsmery bus fleet. He said the bus was run by another owner using the Marsmery name.

But Limpopo SAPS investigating officer Tshifhiwa Netshiya said the name Marsmery was on the side of the bus and the number plate reflected it as part of the Marsmery fleet. According to Netshiya the driver was not hurt SAPS do not know where he is.

Marsmery Travel and Coaches was registered in 2006. According to a company search, it is a closed corporation that has one director: Murinziri Nyaradzo Tandiwe. He took over in 2017 and lives in Zimbabwe.

The survivors were all Zimbabweans.

Chizivano Moyo, failing to hold back tears, said: “I lost my wife and three stepchildren in this accident. I do not know what to do. At the weighbridge near Polokwane we realised the bus was not in good condition. The driver did some touch-ups [tightening exhaust nuts] on the bus and we suspected something was not in condition.”

Moyo, does odd jobs in South Africa. His late wife was employed as a domestic worker. They come from Masvingo province, Zimbabwe. He had bruises on his left arm and on the head.

Makurupetje said: “The driver and vehicle fitness for long distance cross-border buses is a matter of deep concern to us. It is about time that our law enforcement officers step up their routine checks on these buses to prevent this kind of accident from happening.

“I also call upon drivers of buses and other public transport to take rest in between trips as the lives of passengers remain in their hands.”