They want him reinstated and a public inquiry into SAPS 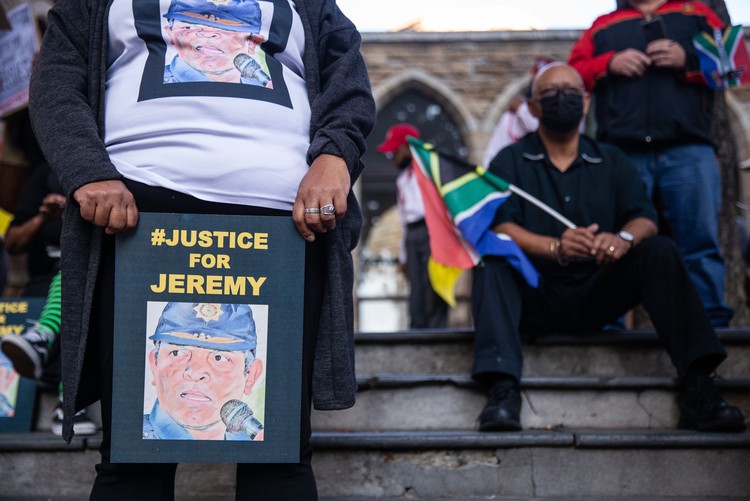 More than a hundred people marched from St George’s Cathedral to Parliament in Cape Town on Wednesday. They are demanding that former Western Cape Head of Detectives, Major-General Jeremy Vearey be reinstated.

Vearey was dismissed from the South African Police Service (SAPS) in May after he was found guilty of misconduct following disciplinary proceedings over comments he made on his Facebook page about National Police Commissioner General Khehla Sitole.

In an open letter addressed to President Cyril Ramaphosa and the Speaker of Parliament, Vearey’s supporters called for a public inquiry into SAPS’s conduct and management style.

“The current form of political … policing must be expeditiously stopped otherwise the malaise of the police services and its increasing lack of legitimacy will continue,” the letter read.

On Wednesday, the group wore T-shirts with #JusticeForVearey on it and held up posters which read: “Hands off our Generals” and “Afrikaaps is nou so moerig! Los my Afrikaaps af!” as they marched through the city centre.

Speaking on Wednesday, dean of St George’s Cathedral, Rev Michael Weeder, said controversy surrounding Vearey’s dismissal has deflected attention from the increasing levels of serious crimes. He said Vearey’s punishment was “extremely harsh” and that at most he should have received “a slap on the wrist”.

“There’s also the view that coloured Generals are being targeted. It takes away the focus from the issue of the nature and extent of crime in our country,” he said.

“If the likes of Jeremy Vearey — of crime-fighting and standing for justice — are out of the picture, who benefits from that? To take Vearey and several others out of the scene of combating crime is both sinister and cynical,” said Weeder.

Advocate Rod Solomons of SA First Forum said a thorough investigation is needed into the governance and abuse of power within SAPS. “Over the years we have seen how committed and competent police men and women have systematically been hounded out,” he said.

“SAPS is suffering from a deep trust deficit amongst our communities. Our people are crying for corrupt-free and dedicated policemen and women who have their safety at heart,” said Solomons.

The group’s letter was received by Charles Ford on behalf of the Presidency. Ford promised the group that a response would be given “in due time”.