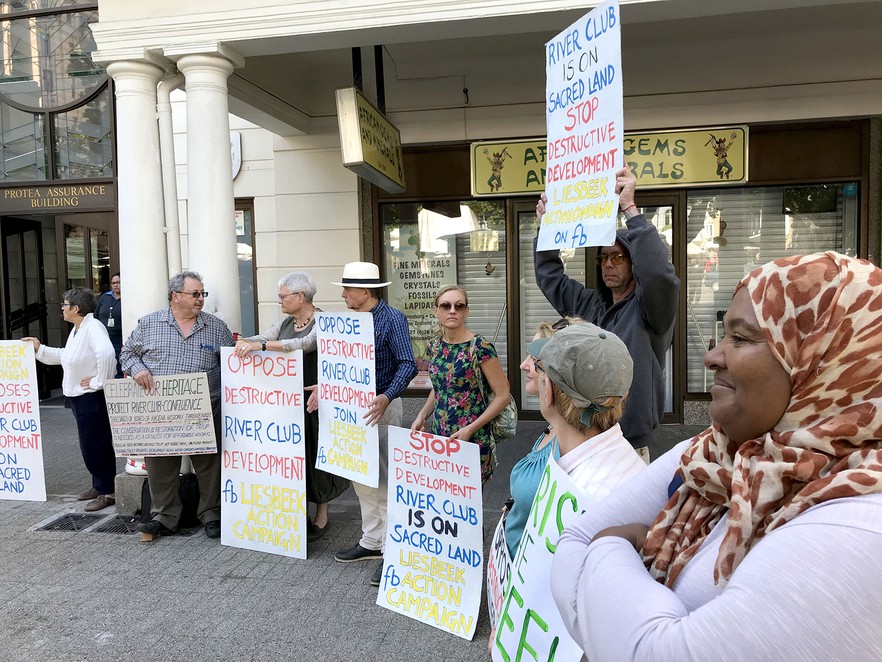 Civic organisations protest outside Heritage Western Cape offices before a tribunal hearing on 21 November. They want the River Club to be given provincial heritage status as it holds great significance for Khoi peoples. Photo: Steve Kretzmann/WCN

A statement that the “First Nations fully supports the proposed River Club Redevelopment”, released on Monday last week, appears to be the latest salvo by Liesbeek Leisure Properties Trust to overcome resistance to a massive development planned at the confluence of the Liesbeek and Black Rivers in Observatory in Cape Town.

Numerous Khoi leaders have expressed outrage at the statement, likening its author Zenzile Khoisan to a pickpocket, and accusing the author of a First Nations heritage report of the site of ethnicide by attempting to write an entire tribe out of history.

The land in dispute is the 14.8ha River Club, which falls within the proclaimed Two Rivers Urban Park. It was bought for R12 million by Liesbeek Leisure Properties Trust from Transnet in 2015. Transnet is one of the parastatals at the heart of state capture investigations.

The land holds significant historical significance for Khoi tribes. This is uncontested by all parties, including in a report produced in November 2019 on behalf of Liesbeek Leisure Properties - compiled by Rudwaan Arendse, the same consultant who produced a First Nations report for the provincial department of transport and public works just two months earlier.

The Trust currently runs a nine-hole Mashie golf course, conference venue and facilities on the property, and plans to build a R4 billion complex with multiple ten-storey buildings housing apartments, offices, and shops. The development plan is opposed by numerous civic organisations and traditional bodies.

Last Monday’s press release in which Chief !Garu Zenzile Khoisan stated: “On behalf of the Gorinhaiqua Cultural Council and mandated by the First Nations Collective”, the “First Nations fully supports the proposed River Club Redevelopment”, was the result of talks with the developer, Jody Aufrichtig, after a surprise breakaway initiated by Khoisan and Kai Bi’a Hennie van Wyk at a Heritage Western Cape tribunal hearing on 21 November last year.

The tribunal had been called to hear an appeal brought by the Trust against a two-year provisional protection order invoked to provide Heritage Western Cape the opportunity to investigate formal protection of the land.

Before the tribunal hearing, Liesbeek Leisure Properties developer Jody Aufrichtig was seen in the lobby on bended knee consulting with Khoisan and van Wyk. 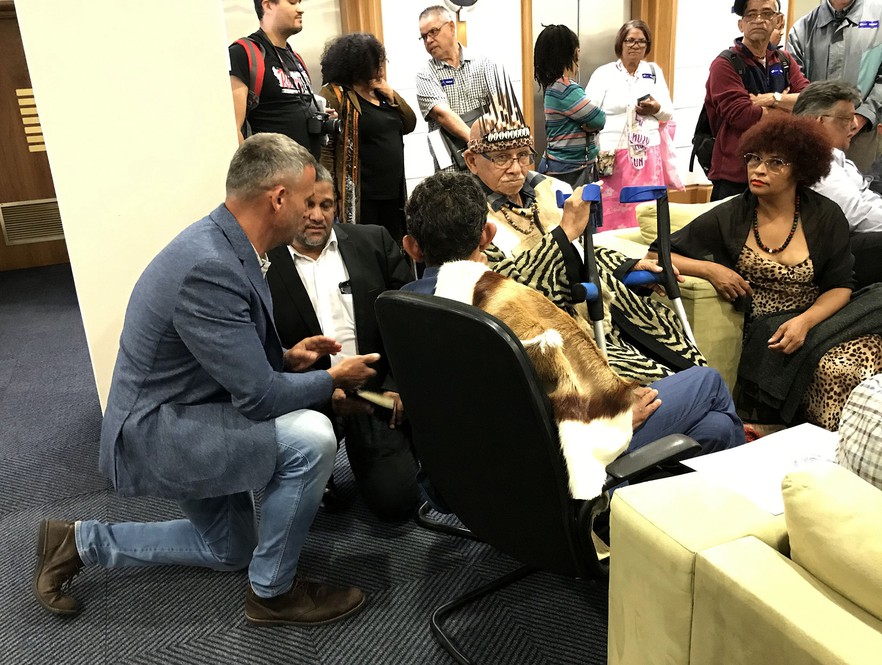 At last week’s press conference on the River Club site, Khoisan stated the First Nations Collective consists of “the majority of senior Indigenous Khoi and San leaders in the Peninsula”. These were the leaders of the Gorinhaiqua, Gorachouqua, Cochoqua, Griqua Royal Council, the San Traditional Royal House of Nǀǀnǂe, and the National Khoi and San Council.

Khoisan announced the River Club “redevelopment” would provide an “opportunity” for “the First Nations people” to “reclaim and share their heritage with the public” through a “dedicated Cultural, Heritage and Media Centre” in a City of Cape Town “landmark”.

Numerous Khoi leaders remain strongly opposed to the River Club development and questioned the validity of the First Nations Collective.

These include Cochoqua leadership, whom Khoisan states are part of the collective.

Bolton said the head of the Cochoqua Indigenous Royal Tribal House is Paramount Chief David Johannes. Khoisan, he said, had obtained the backing of a cultural organisation led by John Jansen. “We must differentiate between traditional leaders and organisations.”

He said Khoisan had never been appointed by “any” traditional council, and van Wyk was appointed by the Gorachouqua Paramount Chief as an interim leader in the absence of any “acknowledged bloodline”.

The proposed Cultural, Heritage and Media Centre, he said, appeared to be incorporated for Khoisan, who he described as “a media person”. Khoisan has variously referred to himself as a journalist, poet, and cultural activist, and claims he was “senior investigative journalist” at Independent Newspapers “some years ago”.

“That media centre looks like it’s for Zenzile,” said Bolton. “This whole development has not got our approval. It benefits a small group who claim they are traditional leaders.”

That Rudewaan Arendse should work as a provincial government consultant and hire himself out to the developer while the development approval process was not complete, was a clear conflict of interest, said spokesperson for Western Cape Department of Transport and Public Works minister Bonginkosi Madikizela, Ntomboxolo Makoba-Somdaka.

In response to questions from GroundUp, Rudewaan Arendse did not admit to any conflict of interest, and stated both reports “objectively articulate the aspirations of the First Nations who participated in the engagement process”.

“Khoi are not divided”

Kai Koran Transfrontier leader, Khoebaha Melvin Arendse, who in October 2018 signed his support for a heritage protection order on the River Club, and opposed the appeal against it, likened Khoisan to a pickpocket, assigning land he had no rights over.

“In no African culture can you in any way dispose of something that is not yours to dispose of,” said Arendse, accusing Khoisan of “pickpocketeering”.

“The exclusivity of interests he claims for himself is ludicrous. Any resident living in proximity to that site has more legitimacy,” said Melvin Arendse.

“We are completely against the site being developed in this manner. No-one has the right to impose economic interests on that space.”

“The Khoi are not divided. It’s one chief and his friend who via telephone got a couple of other chiefs who have never really met, to form the First Nations Collective, which features for the first time in Rudewaan’s report.”

He said the report had tried to write the Goringhaicona out of history by relying on van Riebeeck’s diary entry that there were only about 18 of the tribe residing in the southern peninsula. The report states that Khoisan had warned the Goringhaicona that refusal to participate in the First Nations Collective would be “akin to self-imposed exile”.

A statement has also released by the Gaoba Martinus Fredericks of the !Aman Traditional Authority pledging their “unwavering” support to the Goringhaicona in defending the River Club against further development.

Asked about the origin and standing of the First Nations Collective, Zenzile Khoisan said it emerged from the Gorinhaiqua Cultural Council which was “not a moegoe organisation” and had been part of “every major initiative” to seek recognition for the Khoi and San in South Africa’s democracy. The structure of the First Nations Collective, which he said had first emerged within Rudewaan Arendse’s report, was yet to be determined.

Khoisan said following “deep consultation” with Kai Bi’a van Wyk and John Jansen of the Griqua Royal House, he had been engaging with the River Club developers for the past two months.

He said engaging with the developers was “an act of figuring out what do we want”.

He said the Cultural, Heritage and Media Centre would be run by a collective, and he would be involved.

Further questions sent via email requesting response to allegations contained in this article received no response by the deadline for this article.

According to IOL, on 17 December last year, more than 20 civic organisations and various First Nation paramount chiefs and indigenous groups announced their combined application for the site’s provincial heritage status.

In response, Aufrichtig was quoted in the article as saying: “We can only infer that it’s an attempt to block concerted efforts by the developer to responsibly address the continued injustices of apartheid spatial planning, under the [guidance] of heritage concerns.”

The River Club development has been backed since inception by the Western Cape Department of Transport and Public Works, provincial Department of Environmental Affairs and Development Planning, and the City of Cape Town.

A new Local Spatial Development Framework appears to have been commissioned in order to accommodate the River Club development within the Two Rivers Urban Park.

Final hearings on the appeal by the developers against provisional protection of the site, which civic organisations and traditional councils seek to be afforded provincial protection, take place this week.