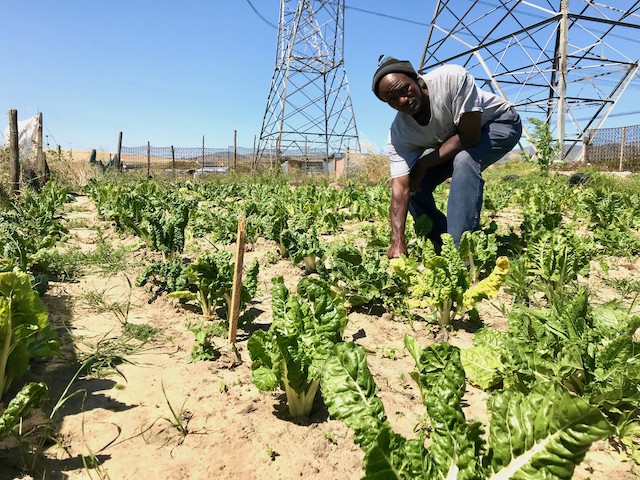 Some small scale farmers in Dunoon near Milnerton, Cape Town, say they are in distress after land occupiers erected shacks amidst their crops this past month.

In early 2000, a group calling themselves Masibambane small scale farmers occupied vacant municipal land near the N7 and Potsdam Road. They grow maize, pumpkins, butternuts, spinach, cabbages, onions and tomatoes and they rear pigs, goats and chickens for subsistence, then sell the surplus at low prices to local residents.

For years Petros Qwane has been supporting his five children and wife with his small farm. But land occupiers have moved in, erecting shacks in some places where the farmers say they have just sown seed. Qwane says the land occupiers had been barging through the farmers’ crops to mark out plots for building more shacks.

“I started farming in 2010. We were supplying food to the whole of Dunoon. A bunch of spinach we sell for R8. Maize cobs we sell for R8 – when they [local buyers] boil it, they would sell to the public at R15 each … With money generated from farm produce we buy school uniforms, stationery and pay scholar transport,” said Qwane.

Max Lugwana accuses the new land occupiers of stealing his crops, livestock and kraal materials, and of planning to occupy his kraal area.

One of the land occupiers spoke on condition of anonymity. He said he has a wife and four children, and he was renting a backyard shack in Dunoon section 28, paying R1,200 a month including electricity. But because he was put on short time at work, he could no longer afford the rent. He said he understands that occupying land used for agriculture purposes is wrong, but he has no choice.

Mayco Member for Human Settlements Councillor Malusi Booi said the land under occupation in Dunoon is a mixture of City, private and state-owned land.

He decried the occupation and said the “City is protecting the interest of thousands of project beneficiaries as well as the surrounding communities”.