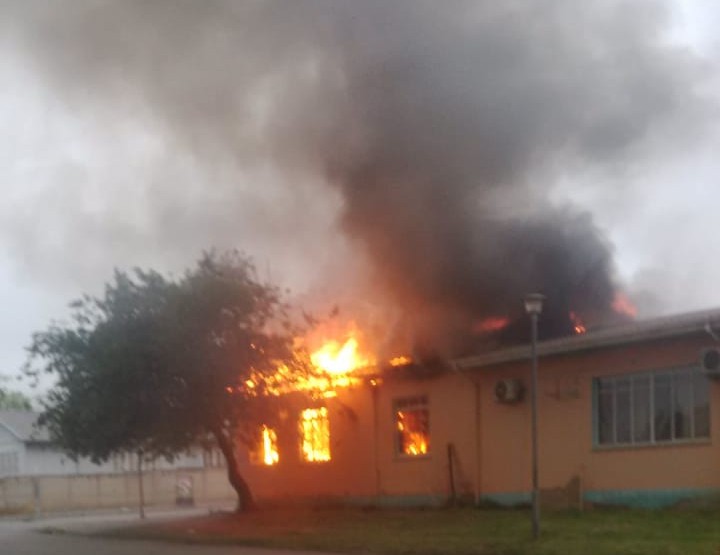 Stutterheim Local Clinic burnt down on Tuesday in a protest over unemployment. Photo supplied

Armed with petrol bombs and stones, protesters barged into the offices of the Amahlathi Local municipality in Stutterheim on Tuesday. They were demanding answers about government jobs.

Protesters we spoke to said burning the clinic was not part of their plan, but destroying the municipal offices was the only thing that would get municipal officials to listen.

The protests entered their third day on Thursday. 18 people have been arrested and one person has died after being shot by police.

Tuesday’s violence came after municipal officials did not meet with protesters at Mlungisi township. The protesters say they had promised to do so.

Protesters claimed that when they went to the municipal offices, they waited outside the offices but no one addressed them.

Officials have denied this, and said the mayor tried to meet with them.

The protesters then decided to destroy the municipal building.

An eyewitness, who asked for her name not to be used, because she lives in the area, said a group of young people from Mlungisi Township in ward 14 marched to the municipal main offices on Tuesday.

She said the protesters were carrying a petition with their grievances, including that no new posts in the municipality are being advertised. The protesters claimed that interns who have been with the municipality for three years have not been given permanent jobs. They also accused officials of hiring family members or forcing youths to buy jobs.

“Next thing we saw protesters going inside the municipal offices carrying petrol bombs and big stones,” the eyewitness said.

“Unfortunately the clinic mistakenly burnt down but it was never the plan,” she said.

On Wednesday the protest started at 4am. The protesters set alight shops at Mlungisi Commercial Park Shopping Centre. Vehicles were stoned and roads closed with burning tyres.

A police vehicle was damaged. Police used rubber bullets and stun grenades to disperse the angry crowd who were also looting shops.

Amahlathi spokesperson Anathi Nyoka said protesters who claimed to be unemployed youth from ward 14 came to the municipality on 25 September with a petition containing a number of issues.

She said Speaker Nokuzola Mlahleki and Mayor Phatheka Qaba responded on the same day to some of the issues, resolving a number of them.

“The municipality was still in the process of trying to attend to some of the outstanding issues. Then on Tuesday they arrived at the municipality burning tyres and the mayor and speaker immediately went outside to address them, but the protesters refused [to listen] saying they wanted to be addressed in their ward,” said Nyoka.

She said they continued burning tyres and suddenly they started throwing bricks at the buildings and eventually torched them.

“On Wednesday a portion of the Mlungisi Community Commercial Park was torched,” she said.

The municipality is unable yet to estimate the cost of the damage.

Eastern Cape Department of Health spokesperson Lwandile Sicwetsha said the department is waiting for a police investigation into the burnt clinic. “Staff escaped unharmed,” he said.

Stutterheim police spokesperson Siphokazi Mawisa said the people who were arrested on Wednesday are appearing in Stutterheim Magistrate Court on Thursday. They are facing charges of public violence and malicious damage to property.

“One male was shot and taken to hospital. The case has been transferred to the Independent Police Investigative Directorate for investigation,” she said.

On Thursday morning, Mawisa said that the situation was calm and police were monitoring it.