March against gender-based violence marred by group of drunk men 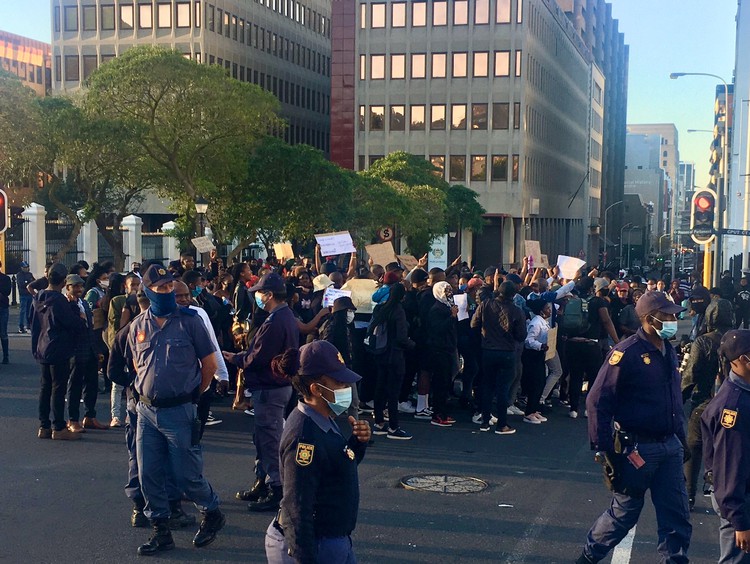 Witnesses said three stun grenades were used by police to disperse a protest against gender-based violence in front of Parliament on Wednesday afternoon. Photo: James Stent

Witnesses said three stun grenades were used by police to disperse a protest against gender-based violence in front of Parliament on Wednesday afternoon.

GroundUp arrived at the scene shortly afterwards. Between 60 and 70 young people, most in their late teens and dressed in black were demonstrating. They held placards that read: “We all have urges, learn some self control”, “Don’t rape”, and “She is all of us”. Women were calling on men to hold themselves accountable.

Chulumanco-Mihlali Nkasela, a member of the EFF student command at Cape Peninsula University of Technology, said she had heard about the protest online. She said that when she arrived there was no one in charge of the protest.

There were around ten young men in the demonstrating group who were visibly and self-admittedly drunk. They were asking the women why they did not appreciate their presence and contribution to the fight against gender based violence.

Nkasela stepped in to help marshal the demonstration. While she was talking to the group, a police officer asked to speak to her. She said she asked the police officer to wait for a minute while she finished communicating with the group.

According to Nkasela, the police officer did not wait and instead threw three stun grenades into the crowd, scattering the group.

When GroundUp arrived, the demonstrators had regrouped. By 5pm, the demonstration had set off down Plein street, and then dispersed as they reached the Grand Parade.