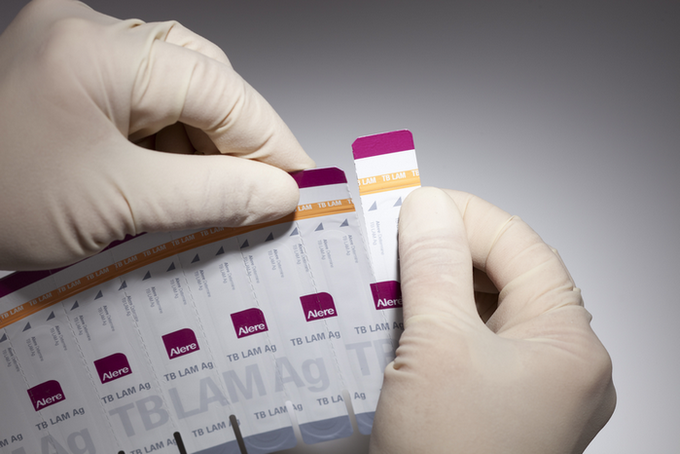 The LAM test detects TB in urine. (Fair use of photo which is copyrighted by Alere Inc and copied via Discovery Medicine).

Local and international health activist organisations have written to the Minister of Health, Aaron Motsoaledi, calling for the “immediate introduction” of an affordable and quick test that can detect TB in HIV-positive people who have become very ill.

The test detects TB in urine.

The letter states that the test is simpler to use and more sensitive in people with HIV than other tests that use sputum (coughed-up mucus). The test provides a result in 25 minutes and costs approximately US$2.66 (R40). The World Health Organisation has also recommended the test to assist in the diagnosis of TB in HIV-positive people with low CD4 counts or who are ill.

The letter cites the results of a clinical trial published today in one of the world’s leading medical journals, The Lancet, where over 2,000 people were tested using either LAM in combination with routine diagnostic tests or just routine diagnostic tests. All the trial participants had symptoms of TB. The trial was run in South Africa, Tanzania, Zambia and Zimbabwe. The lead investigator is Professor Keertan Dheda of the University of Cape Town.

The speed of the LAM test result meant that patients who tested positive for TB could be put onto treatment immediately.

The letter states that this is the first ever TB diagnostic test to have “demonstrated [a] mortality benefit in a clinical trial.”

Erica Lessem, Director of the TB/HIV project with the Treatment Action Group in New York, explains that the test allows patients to be put on TB treatment earlier than if they were just routinely tested, which also reduces the patient’s infectiousness. Lessem says that the test should be used along with other TB tests as “nearly half” of cases of HIV people with TB are missed.

“Also, the test is great because it is a … urine dipstick test, like the technology used in a pregnancy test. This means it can be rolled out without electricity, without a laboratory, without concerns about biosafety hazards,” says Lessem.

Despite the benefits of the test, it does still miss many cases. Lessem says that a negative LAM test does not mean that the patient does not have TB and follow up tests are still required.

Importantly, the test is also not suitable for people with HIV who have higher CD4 counts. It is only suitable for use in HIV patients who have low CD4 counts or who are very sick. Lessem explains that this is because the antigen that the test detects is thought to be present only in those with active disease and appears to be even more present in those with “advanced immunosuppression”.

“There are a few different theories for why this is,” says Lessem. She explains that one of these theories is that people with severe HIV-related immunosuppression are more likely to have a higher number of TB bacteria in their bodies, so there will be more antigen; another theory is that they are likely to have TB in their urinary tract; and yet another is they have more permeability in the filter system of the kidneys that allows for higher antigen levels in their urine.

This is reiterated by Francesca Conradie, who is the president of the Southern African HIV Clinicians Society. Conradie says the test is useful in patients who have HIV and low CD4 counts but the problem is that a negative result does not mean the patient does not have TB, and further tests are needed.

Despite this, Conradie believes that the test should be rolled out by the Department of Health, but concedes that this would be a “massive undertaking” and it would need to be carefully done to ensure that the test was correctly used.

She says that if the test is rolled out, doctors and nurses need to be trained not to stop investigating a possible TB infection in a patient just because the test is negative.

Marcus Low of the Treatment Action Campaign [TAC] agrees that training and guidelines for the use of the test are essential but says that they should be done quickly, adding that the test is simple to administer.

Low says the test is “an important addition to the tools we have at our disposal to detect TB”.

The letter recommends that training is given to staff when the test is rolled out and that it begins as a pilot in large hospitals in the metropolitan centres before moving to all all district hospitals.

It calls for Motsoaledi to take steps to “procure this product urgently, facilitate its registration in South Africa as soon as possible, and ensure its availability in the public sector”.

Ministry of Health spokesperson Joe Maila told GroundUp that an “expert group is currently reviewing the data and developing a set of guidelines”.