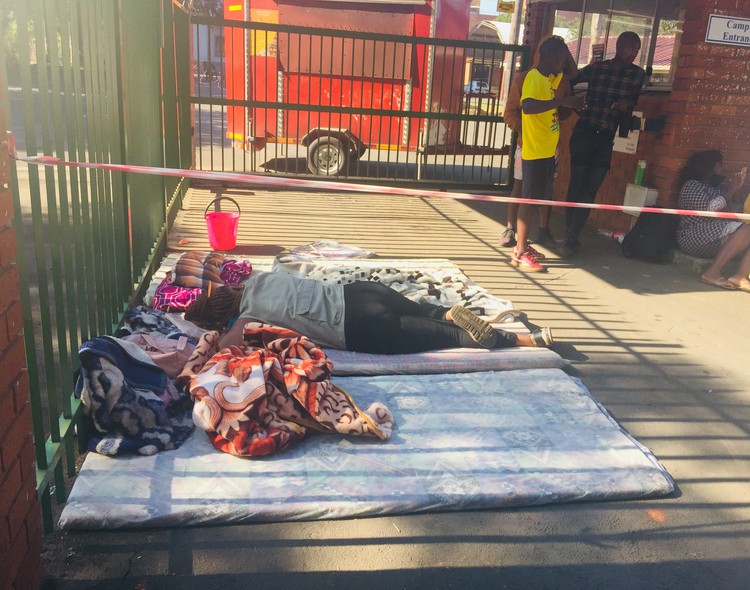 Students sleep at the gates of Umgungundlovu TVET College’s Msunduzi Campus in Pietermaritzburg after being evicted by landlords because they are unable to pay rent due to outstanding payments from the National Student Financial Aid Scheme. Photo: Nompendulo Ngubane

Students in Pietermaritzburg slept outside the entrance gates to their college for the second time on Tuesday night.

They are enrolled at the Msunduzi Campus of Umgungundlovu TVET College.

The students say they were evicted by private landlords because they are unable to pay rent due to outstanding payments from the National Student Financial Aid Scheme (NSFAS).

Regional task team member, Lungani Dlamini, said that students had submitted all the required documents to the college in time but the college delayed the submissions.

“We have made our own enquiry with NSFAS and they said there was a delay from our college. Other TVET colleges such as Umfolozi and Amajuba are not in the same predicament. They are continuing with lectures and everything is normal.

“At our campus, students slept on the street fearing for our lives. The college refused to provide us with a place to sleep last night. We had no choice but to sleep outside the gate on the street,” said Dlamini.

Mattresses and blankets could be seen lined up at the college’s gates while some students protested and sang struggle songs. Most of those sleeping outside come from Newcastle, Empangeni and the Eastern Cape.

Dlamini said students have tried talking to the college’s management but to no avail. “We are prepared to shutdown the college until they resolve our payments. Every year it’s the same issue. Most of us come from far and we have no relatives here, what are we supposed to do?” asked Dlamini.

Student Londeka Majola said that sleeping outside has been traumatising. “Some students don’t have money for transport to get the education they deserve. The management is being ignorant. Getting education in this country is still a challenge and it won’t be better anytime soon,” said Majola.

Multiple attempts to get comment from the college principal Ntombi Ntshangase were unsuccessful.

NSFAS’s Marketing and Communications person, Services Papama Mpupa, told GroundUp that our query was being processed on Tuesday. A response will be included once received.