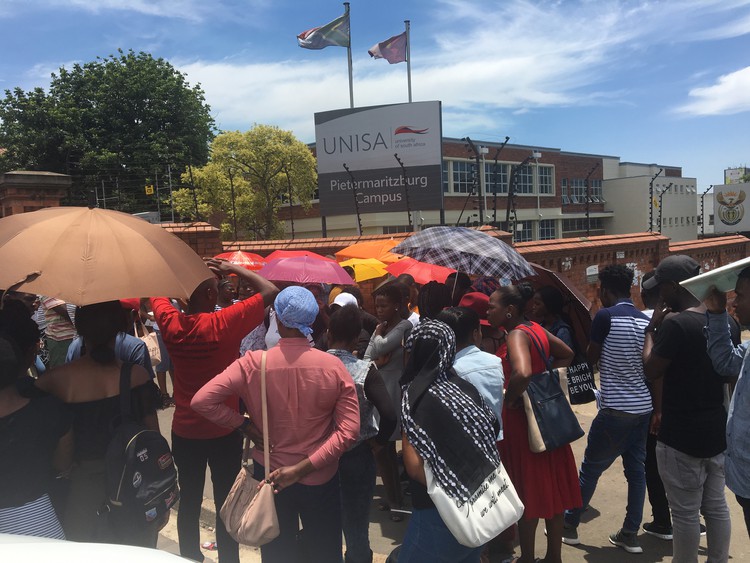 The gates of the University of South Africa (UNISA) Pietermaritzburg campus were locked on Tuesday due to a strike, leaving students outside. The strike is taking place at other UNISA campuses too.

National Education, Health and Allied Workers Union (Nehawu) members want a 12% salary increase. University management is offering 6.5%. While negotiations were taking place inside, students were standing in groups outside the campus gate.

SRC member Khetha Mthethwa said it was not clear when registration would resume. He said some students had come from afar and had not been warned by the university.

New student Thandeka Ndlovu, from Stanger, came on Monday and was told to apply online. She said she had never touched a computer before but had managed to apply. She was given a number and told to return on Tuesday. “By 6am in the morning I was already here. When we came the gates were closed. After taking four taxis twice, I’m going back home without registering again,” said Ndlovu.

Nehawu regional chairperson Sikhumbuzo Mdlalose said the 6.5% offer was “an insult” to workers. “Once management comes with a reasonable offer we will look into it.” Workers were also demanding permanent employment rather than contract work, he said.

“We will be glued to television screens and listening to radio for any developments. We can’t be wasting money on taxis for nothing. I come from Hammarsdale and I asked for the taxi fare from my grandmother,” said student Thami Ndlela.