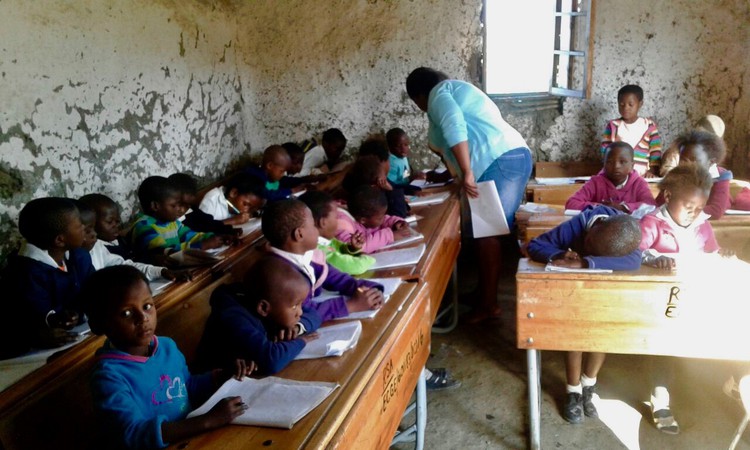 A year ago in July, after a student posted photographs on a social network of the mud school they attend, government officials visited Mbabalana Senior Primary to see for themselves. After seeing the conditions, a new school was promised.

The officials were from the Eastern Cape Department of Education (OR Tambo district), provincial government, and the Presidency. But teachers say they have heard nothing since, except in November 2016, when officials came to count the number of learners and left.

“I’ve been calling the district offices since January. No one is telling me anything,” said a teacher.

Mbabalana is a state primary school located at Machibi Agricultural Authority, Port St Johns. The school has 278 learners from grade R to grade seven. It has three toilets, none of which have doors – one each for teachers, boys and girls. The school has no piped water and relies on rainwater. Learners are asked to bring water from home. With only five teachers hired by the department, some classes are combined.

The school was built by parents in early 1970s; three mud classrooms at first. In 2005, Port St Johns local municipality added four classrooms; three with bricks, but they were very small.

By 2010, the mud classrooms were collapsing. Parents donated R100 each and volunteered their time to collect water from a dam. They started to build four more classrooms, but struggled to finish them.

A private company is now helping with flooring. Ceilings, windows and plastering for the walls are still needed.

“We lost hope that we will ever receive a better school from government,” said a teacher.

A similar situation prevails at Dedeni Senior Primary School in Dedeni Village, Lusikisiki, Port St Johns. In 2006, parents built seven mud classrooms. For roofing, each home donated R20. The principal donated part of her salary and the ward councillor at the time donated R2,000 from his own pocket. The money was used to buy zinc sheets and poles.

School Governing Body Chairperson Mzingisi Bomela said, “As parents we decided to stand up for our children’s future. We didn’t want them to end up like us. We did not go to school because schools were far.”

He said there used to be only one primary school ten kilometres away. Because of the distance, children only started going to school when they were older than ten. “That caused a lot of drop out and most children ended up not going to school,” Bomela said.

The parents have very limited resources as most rely on social grants. They had hoped government would intervene.

Today, Dedeni has 223 students from grade R to grade seven and seven teachers. The mud classrooms are overcrowded and collapsing. Classes are given under trees if the weather is good. If it rains, classes take place in the church hall. For a staff room, the teachers have a desk under a tree where they meet. The principal’s car is used to prop up a blackboard.

The school relies on rainwater from a tank and a nearby dam. There is one toilet. It is used by teachers. The children relieve themselves in the bushes.

A teacher said many emails had been sent to the provincial MEC for education, Mandla Makupula. In 2013, his office said officials would be sent to check the school and temporary classrooms would be delivered.

Nothing came of it.

GroundUp learned about Dedeni from NGO Umanyano Lwabaphulaphu coordinator Modi Maqabaza. He has sent emails to Makupula and Eastern Cape Premier Phumulo Masualle, but neither have responded.

“We already bought bricks to assist in building the school through money donated by our members, but the material is not enough to build the whole school,” he said.

The official from the presidency who visited the school said he could not talk directly to the media.

The spokesperson for the Eastern Cape Department of Education, Malibongwe Mtima, had told GroundUp that officials would be sent to the two schools on Friday (last week) after which he could respond to queries sent to him two weeks ago. The schools say no officials pitched up.