If management don’t respond all campuses in the province will be shut down on Tuesday, says SRC leader 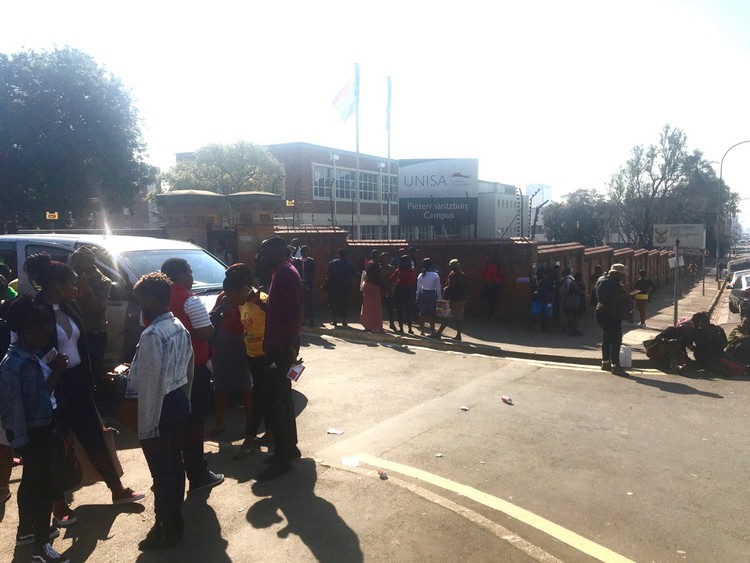 Students at UNISA (University of South Africa) locked the gates of the Pietermaritzburg campus in Langalibalele Street on Thursday. They threatened to shut down all UNISA’s campuses in KZN if management does not address their issues.

Student say they are concerned about a shortage of staff and resources, safety and security, and delayed payments to students by NSFAS (National Student Financial Aid Scheme).

Deputy secretary of the UNISA KZN Student Representative Council Khetha Mthethwa told GroundUp, “If they don’t respond [by Monday] we are taking to the streets.” He said all campuses in the province would then be shut down on Tuesday.

“Students are having a problem with NSFAS … Students have no money to buy books. Their registration has been finalised but they have not been paid. The list has been sent to NSFAS but they have not responded. Some are still owed last year’s funds. We don’t know how that is happening,” said Mthethwa.

Fourth-year student Amanda Thompson said, “There is no space in the library. On weekends they open at 1pm and that is not enough. We need the hours extended … This campus is the worst. They don’t listen to us.”

SASCO (South African Student Congress) treasurer at the Pietermaritzburg campus Philani Madonda said, “They have no staff in the library department. There was one employee. The employee went on leave. They replaced the employee with a person from the funding department. That person is clueless about the library services. There is a problem even with the funding office. They have no idea about the procedures of that office. We need qualified staff,” said Madonda.

University Registrar Dr Faroon Goolam said management had received a memorandum from the students and are currently attending to the matter.