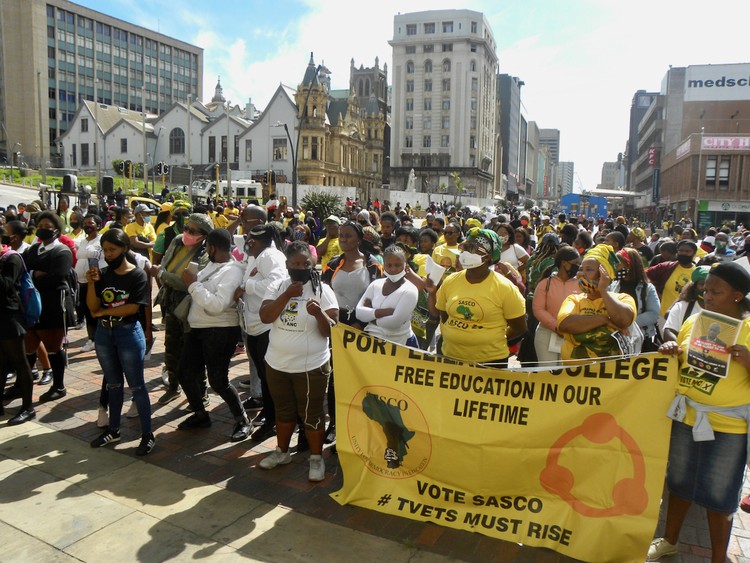 About 100 students from TVET colleges and Nelson Mandela University marched on Tuesday to the Port Elizabeth City Hall to hand over a memorandum of demands to Mayor Thsonono Buyeye. Photo: Joseph Chirume.

About 100 students from TVET colleges and Nelson Mandela University marched on Tuesday from Russel campus to the Port Elizabeth City Hall to hand over a memorandum to Acting Mayor Thsonono Buyeye. The students are demanding that the municipality fulfil a previous commitment to convert derelict buildings in the metro into student accommodation at low rentals.

COSAS provincial deputy chairperson Sikho Njana said, “There are many students who are sleeping in the corridors of libraries and college halls.”

“We have several buildings in the metro that are derelict and have been empty for many years. Most of these buildings have been turned into drug and prostitution dens. They are a security threat to residents. We want the municipality to invoke its by-laws on abandoned buildings and convert them into student accommodation. We want the municipality to provide security to these buildings,” said Njana.

Njana said the municipality must also improve street lighting in Central and Summerstrand areas where many students live.

Qhayiya Gwiji, who is studying electrical engineering at Qhayiya college, said she pays R800 a month for private accommodation in Kwazakele. “As female students, we are not safe. I would prefer a place with a security guard and security features but they are very expensive … The landlord demands his money at the end of every month even if the National Students Financial Aid Scheme did not pay us,” said Gwiji.

Simahle Present, also studying electrical engineering, said she pays R750 per month in Zwide and spends nearly the same amount on transport. “We also don’t have access to free WiFi. The moment we leave the college, our safety concerns begin,” said Present.

Mayor Buyeye told the students the City respected the issues in the memo and had been engaging with these. “Port Elizabeth is … like a ghost city and for us it’s a concern. There is no active nightlife and students are not active. The economy of the city goes to sleep … Dilapidated buildings that are an eyesore to investors is a concern for us. We will sit with the leadership and come back to you in two weeks time.”