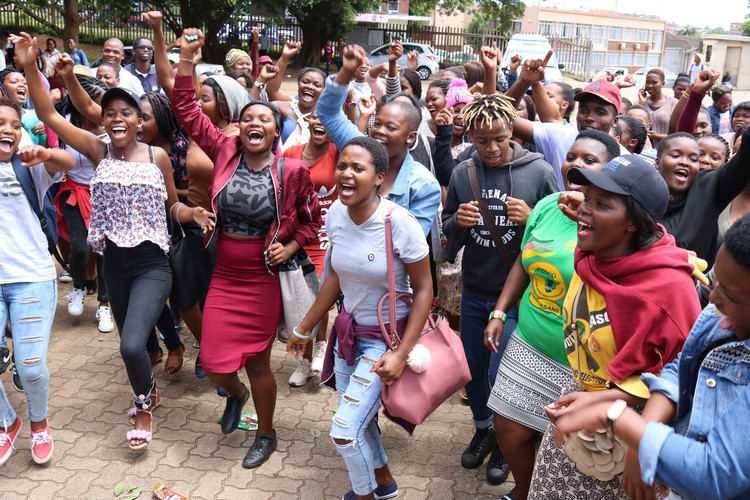 Students brought the registration process at Ethekwini College to a halt on Tuesday. Photo: Zimbili Vilakazi

Conflict arose after hundreds of students applied to register via the Central Application Office (CAO) but their registrations appeared not to have been processed in time. The CAO is an institution that facilitates registration at several tertiary institutions.

The college would only allow about 80 students on a list of those who applied via the CAO to register, at least for now. Several hundred other students whose names did not appear on the list decided to protest causing the institution to halt the registration process and close its gates.

Thembelihle Luthuli (21) told GroundUp that the students believed that the process was unfair. She described how students came to the institution last week Monday. They were hoping that they would be assisted with registering on the college’s premises. But they discovered that the college was only accepting applications via the CAO, and they had to follow that process.

“We were told that after applying through the CAO we would get a response before the end of last week. We listened and applied via the CAO. That cost each and everyone of us R400,” said Luthuli.

She said the week ended without getting any response, so many students decided to go to the institution on Monday (15 January). To their surprise they were not attended to.

“We went there again today (Tuesday) only to discover that only 80 names [were eligible to] continue with the registration process. That angered us and we decided to protest because it looked like the campus management does not care about us,” said Luthuli.

Another student, Snenhlanhla Ngcobo (21) said what was causing them to be angry is that the college failed to make the new method known last year and it is now causing unnecessary misery.

“Some of our parents had not budgeted this R400,” said Ngcobo. She said that some of the students came from far away places and they hoped that they would go back home with good news for their parents.

The Student Representative Council (SRC) and the campus management were meeting in the afternoon to discuss a way forward. We were unable to get comment from the SRC president in time for publication. The campus manager requested by SMS to be called later.