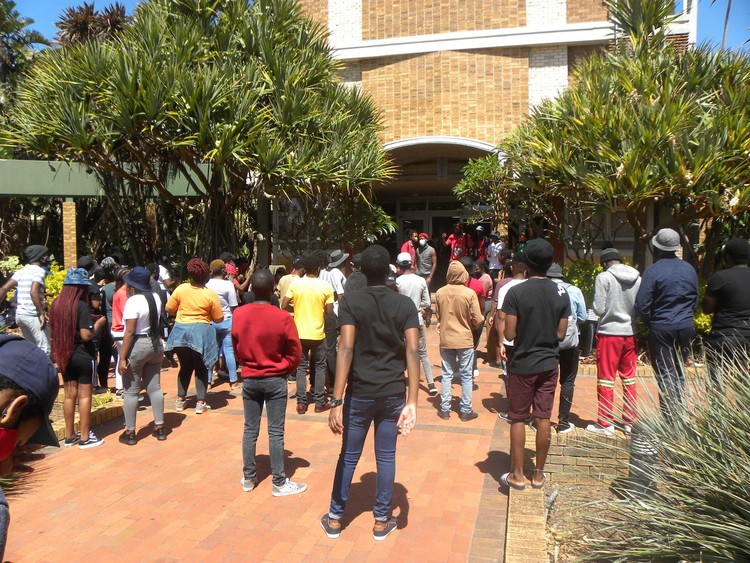 Students camped at the entrance to Nelson Mandela University’s Financial Aid offices at its North Campus on Thursday. The students say they among more than 1,400 who did not get their NSFAS allowances for December. Photo: Joseph Chirume

About 120 students from Nelson Mandela University gathered at the entrance to the university’s Financial Aid offices at its North Campus on Thursday. The students say they are among 1,420 who did not get their National Students Financial Aid Scheme (NSFAS) allowances. They claim they were last paid at the end of October.

Students say they were left without means to buy food.

The students were led by the Economic Freedom Fighters Students’ Command and the Pan Africanist Student Movement of Azania.

When GroundUp asked students for comment, they only agreed to speak on condition that their names be withheld.

One student claimed that they were promised money because the 2020 academic calendar had been extended into next year. He claimed1,420 students had been excluded because their fee payments had not yet been cleared by NSFAS.

“The students are frustrated and hungry. We discovered that some of our fellow students were sleeping on empty stomachs. This is dangerous during this time of Covid-19 because a hungry person disregards all the protocols and ends up contracting and spreading the disease while looking for food,” said one of the student leaders.

Another student leader said: “We held several meetings with university officials but they are not coming to the party so we decided to take to the streets to show our frustration. If they don’t give us the allowances [by Friday], we will have no choice but to shut down all university operations.”

Nelson Mandela University spokesperson Zandile Mbabela said the names of about 1,300 students funded by NSFAS had not appeared on the “Nelson Mandela University funded lists” for November and their allocation had not been paid to the university. The university had contacted NSFAS and its Financial Aid offices had now “begun effecting payments of the students’ allocations”, Mbabela said.

This article has been updated with comment from Nelson Mandela University.