Students up in arms and employees down tools at UKZN 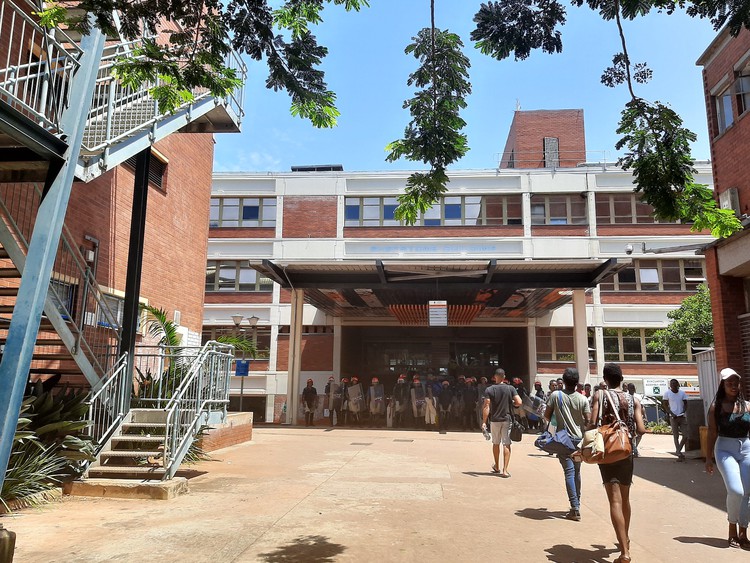 Students attend lectures amidst a heavy security presence at Howard College Campus at the University of KwaZulu-Natal. Photo: Alice Draper

By Alice Draper and Nompendulo Ngubane

Students at the University of KwaZulu-Natal (UKZN) Howard College Campus, Durban, have vowed to continue protesting until management meets their demands.

This comes after an HIV support centre on the campus was set alight early on Monday morning when lectures were due to start for the 2020 year. Meetings between the student body and management had reached a deadlock, but by mid-morning students were attending classes.

Student Representative Council (SRC) chairperson Mphathi Majola said, “As the SRC, we always encourage people to protest in an orderly fashion and we distance ourselves from the burning of property. Although, I’m not convinced that it could have been students since the campus was swamped with Mi7 (campus security) guards.”

“The militarisation of our campus just goes to show the incompetence of management,” said Majola. “Instead of resolving the issues, they militarise campuses.”

Last week, the university was shut down by violent protests. Minister of Higher Education Blade Nzimande released a statement saying that all students with historic debt who qualify for the National Student Financial Aid Scheme (NSFAS) should be allowed to register for classes if they sign an acknowledgement of debt form.

But Majola said that this was not happening at UKZN, since the university was requiring students to first pay 15% of their historic debt. Most of the students on NSFAS did not have the funds to do so, and many students therefore hadn’t been able to register, Majola said.

“There are secondary issues as well. We have a huge accommodation crisis and there are about 600 students entering the university for the first time who do not have a roof over their heads. Then, of course, the state of the residences is not conducive to studying. But the main issue is financial clearance,” said Majola.

Employees down tools at Pietermaritzburg

At the University of KwaZulu-Natal Pietermaritzburg campus, cleaners and gardeners downed tools on Monday morning, demanding a wage increase and back pay. Protesting students joined the workers. Police dispersed them with rubber bullets.

The workers want an increase and back pay which they say they were promised by the employer in 2016. Other issues include the shortage of staff and poor working conditions. Workers say some are paid higher salaries for doing the same jobs.

“All we want is our money they are owing us,” said Bongi Thwala. “We have other issues, but the priority is our money.”

Thwala said she earns R6,000 a month before deductions.

A gardener, who did not want to be named, told GroundUp that workers were divided. “We are doing the same duties, but we report to different managers. This struggle has been going on since 2016. The institution is aware of that. We have decided that we are not working today.”

“We are not fighting with them [management], but we want justice. If they can come now and tell us they are agreeing to sort out these problems, we can even go to work now,” he said.

“I have to do work which should be done by three people … There are many vacant positions … The matrons want the work done properly. How are we going to do that while we are short staffed?”

In a statement, UKZN management said it is aware of the grievances of some staff on the Pietermaritzburg campus and said a special meeting would be held to address the issues on Thursday.

In a media statement, Ashtyn Bodrick, UKZN Executive Director of the Corporate Relations Division, said the university is unable to concede to the student demands and that the university had increased security presence to prevent academic disruptions.

“Following extensive deliberations on the matter of student demands, university management has decided that it is not possible to grant any further concessions, without putting the university at risk of bankruptcy,” Bodrick wrote.

He added that: “Security has been further bolstered and every effort is being made to ensure that the Academic Programme proceeds as scheduled without further disruptions.”