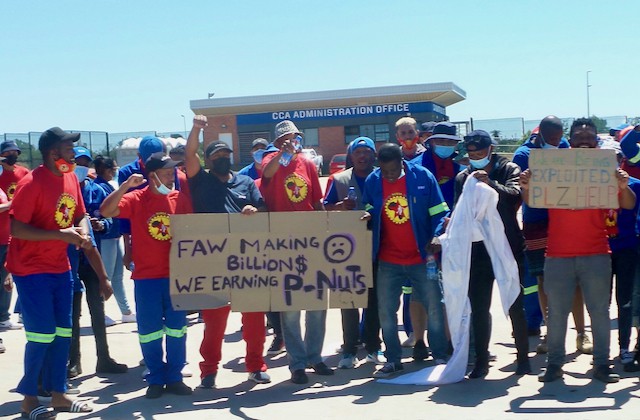 Striking workers have been picketing at the main entrance to the Coega Industrial Development Zone where First Automobile Works is located. Photo: Joseph Chirume.

The strike continues at First Automobile Works (FAW) in Gqeberha which started on 15 October. About 85% of the workforce who are members of the National Union of Metalworkers of South Africa (NUMSA) are on strike.

They are demanding a wage increase of R40 per hour, backdated to September 2020. Most workers currently earn R39 per hour.

FAW Human Resources Manager Ronel Fourie said the company used to fall under the Motor Industry Bargaining Council (MIBCO) until October 2020, after NUMSA successfully applied to the CCMA to have the company demarcated from MIBCO.

FAW assembles motor vehicles from new components imported from China, with the capacity to build 5,000 vehicles per year, 60% of which are exported, according to CCMA papers.

NUMSA Eastern Cape regional secretary, Mziyanda Twani said, “The reason we wanted to be removed from MIBCO was that FAW did not belong to the motor component manufacturing sector. It assembles trucks and MIBCO does not accommodate companies that assemble.”

“We want the company to join other auto assemblers.” He said FAW should join the Automobile Manufacturers Employers Organisation like BMW, Ford, Isuzu, Mercedes-Benz, Nissan, Toyota and Volkswagen and then join the National Bargaining Forum on that basis.

Twani said rates set by MIBCO were lower than those paid by companies in the Automobile Manufacturers Employers Organisation. “For example a worker at FAW is currently paid R39 per hour, while their counterparts at other truck assemblers earn R99 per hour.”

He said NUMSA is the only union at FAW with 160 members (over 85% of the workforce) and the company employs between 170 to 190 workers.

Fourie would not confirm these figures.

Twani said the strike is still on and negotiations are progressing.

Fourie said its employees are paid the MIBCO rates applicable as at the date the company was demarcated from MIBCO.

Fourie said the company’s final offer made at the end of September offered “wages well in excess of those earned by employees falling within MIBCO’s scope”.

“NUMSA unfortunately rejected this offer and instead elected to embark on strike action in pursuit of an increase in excess of 100%,” she said.