Stop giving to beggars so they can move elsewhere, says City councillor

I’m on the streets because my shack has been destroyed by the City, says homeless woman 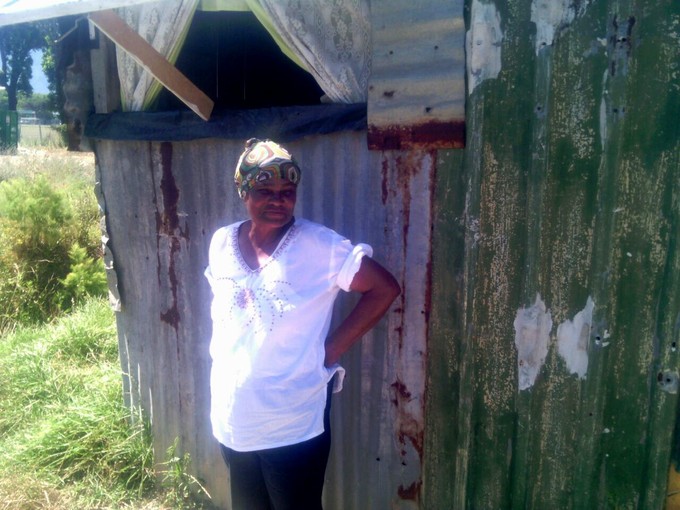 Margie Matthews lives in a shack in Bonnytoun, but she used to live on the streets of Wynberg. Photo: Bernard Chiguvare

By GroundUp Staff and Bernard Chiguvare

“Since they rely on our handouts for their existence, if you stop giving to beggars, street people and car guards, they will move elsewhere,” wrote Sea Point’s ward councillor Shayne Ramsay (DA) on Facebook on the weekend. Ramsay called for a march against grime on Tuesday night. She invited police and the City’s security to join the protest, and for participants to wear a white top or T-shirt “to stand out in the dark and in the theme of cleanliness.”

Leslie Skelder, 32, lives on the streets of Wynberg. “I have so far tried twice to build a shack in Bonnytoun but it was destroyed by City’s law enforcement,” she told GroundUp. “This leaves me with no option but to come back in the streets.” Bonnytoun is an informal settlement located between the M5 and Rosmead Avenue behind a dumping site in Wynberg.

“They come at unexpected times and destroy our makeshift homes. I lost my ID during these raids and it is difficult to get one,” said Skelder. She tries to warm or prepare food in a makeshift home. “I have health issues. Every month I have to visit the hospital for medical checkups and after that I need to feed myself properly but if I have no roof. I do not know how they want me to survive.”

Originally from Eersterivier, she has been living in Wynberg, homeless or in a shack, since the age of 13, she says.

Margie Matthews, 62, says: “I know what it all means staying outside a roof. The conditions are so bad especially in winter.” Although she now lives in a shack in Bonnytoun, she used to live on the streets. She says she knows homeless people who have died in her area over the past decade; some of them were her friends.

She became homeless at the age of 25. “Originally I used to stay in Mutual Estate with my parents but after the death of my mother I could not stand the heat from my stepmother so I decided to move away,” she says. Matthews wants the City of Cape Town to do more to accommodate homeless people.

“It is hard [to be homeless]. I know all the street corners and under-the-bridge places in Wynberg. Every morning my friends and I scraped for food in bins. At times law enforcement would come and take away our belongings and destroy our makeshift shelters which we called homes.”

Ramsay then deleted the post and wrote an apology on Facebook: “I unreservedly apologise to everyone I offended, particularly the homeless South Africans in Cape Town. The march planned is now cancelled.”

Most of the commenters on Ramsay’s page were not impressed. Becca Marcus wrote: “[T]hank you for doing the right thing by apologising for your words and cancelling the disturbing and hateful ‘March against grime’. An apology isn’t sufficient however, a change in attitude and political direction is. Please use your position to work for those in Sea Point who really, desperately need support. Let the work begin to actually find ways to support those in Sea Point without fixed abode, those at risk of evictions and harassment, as opposed to hateful speech and forced removals in this city with a devastating past of forced removals.”

Asked for comment, Ramsay said: “I am overwhelmed, ashamed, embarrassed and I have put out a statement of regret.” She referred GroundUp to a DA spokesperson for further comment. At the time of publication, we had not yet been able to get further comment.