Families living in tents one year after evictions 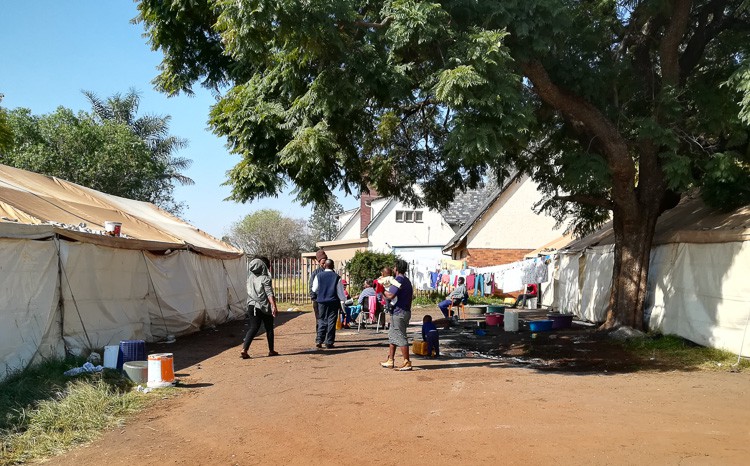 Residents evicted in June 2017 from Fattis Mansions have been living in tents on Wembley Sports Stadium. Photo: Zoë Postman

Families who have been living in tents in Wembley Sports Stadium for about a year were promised by the City of Johannesburg that they will be moved into new housing on Friday last week. But the families have not been moved because the City is still completing the verification process.

About 70 former residents of Fattis Mansions, a block of flats in central Johannesburg, have been living in tents at Wembley Sports Stadium for about a year after the City of Johannesburg evicted them from the building.

Community Leader Albert Zulu said the City had evicted the residents and placed them in two large tents as emergency temporary accommodation. “When they put us here they didn’t give us anything. We have no water, no electricity…nothing,” said Zulu.

Despite promises of allocating housing on Friday and Saturday, Zulu said the City told him that it was still completing the verification process that determines who gets housing. No one has been allocated housing to date.

“The City is aware of the dire circumstances under which evictees continue to live in at Wembley Stadium. It is unfortunate that the City’s housing crisis has such harsh ramifications on our most indigent residents,” said Taunyane.

Taunyane said the City was building 100 family units and 14 single units at Wembley Stadium and residents would be moved on Friday.

GroundUp visited the site of the new units on 5 June. The community liaison officer for the construction company, Jessica Mohai, said one family unit would accommodate two parents and a child and two units would share a bathroom. Single units would be more like hostels and would fit four to five beds.

She said it would take about two months for the units to be completed.

One resident, who asked to remain anonymous, said if they were not moved this would be the second winter the residents spent in the tents. “It gets so cold in there because the air comes through all the holes…it’s not easy staying here,” he said. “The worst part is that they [the City] found us comfortable in our space but they took us out. Now they are failing to provide services which we all deserve as South Africans.”

Director of Litigation at the Socio-Economic Rights Institute Nomzamo Zondo said legally the City could put people in tents for a short period but had to provide water and sanitation. She said the City had been ordered by the High Court to provide alternative accommodation by November 2017 but had asked for an extension until March 2018.

“We met with the City in April and we were advised that the residents would be relocated by 31 May 2018, but this did not happen,” said Zondo.