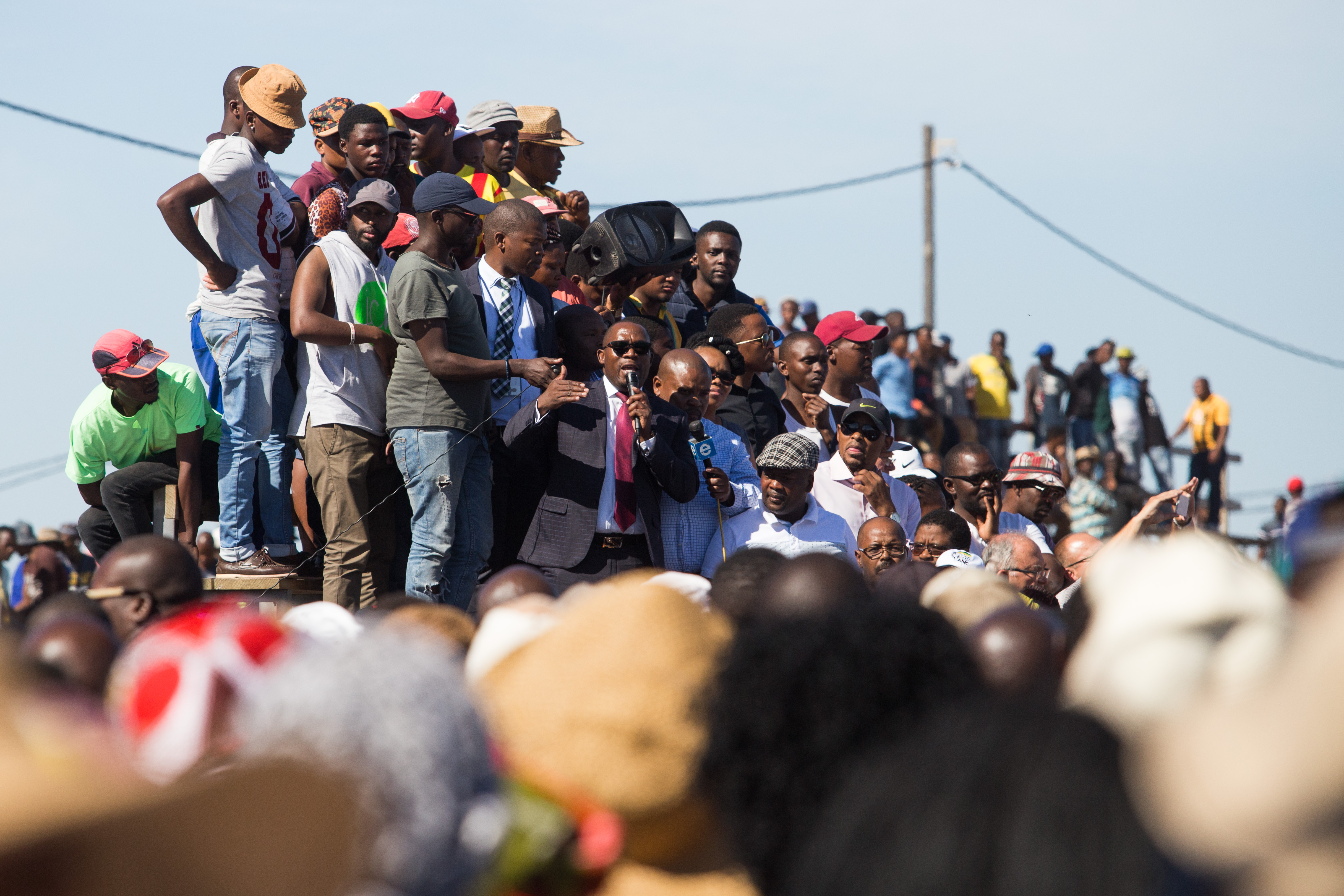 Former Western Cape Housing MEC Bonginkosi Madikizela addressing residents of Zwelihle in March 2018. Now residents say Madikizela has not kept his promises and very little has been done to resolve the housing issue in the area. Archive photo: Ashraf Hendricks

More than a year has passed since unrest and protests over housing erupted in Hermanus, yet very little has been done to resolve the problem.

Zwelihle residents have called an urgent meeting with government on 24 June. They say that promises by the then Minister of Human Settlements Bonginkosi Madikizela and Minister of Police Bheki Cele have not been kept.

In an effort to get residents to call off the protest in March last year, Madikizela told them that he had identified a plot of land to be developed for backyard dwellers. On 18 May 2018, Ntomboxolo Makoba-Somdaka, spokesperson for the Western Cape Department of Human Settlements, told GroundUp that an agreement was reached with the land owner.

Last week, Zwelihle community leader Theron Mqhu said they were previously told that the Schulphoek land would be expropriated with reasonable compensation. He said they would be demanding answers from officials.

On Tuesday, residents occupying private land in Schulphoek, Hermanus, are due back in the High Court to oppose their eviction. The application was brought by the owners of the land, Cape Theme Parks and Cavcor.

About 4,000 former Zwelihle backyard dwellers have been occupying the land since March last year. They have named the informal settlement, Dubai. Occupiers resisted numerous attempts by the Red Ants to remove them last year which resulted in unrest and protests in Hermanus.

The Zwelihle community and land occupiers say they were promised that Schulphoek would be used to build houses for backyarders. In 2010, the Overstrand municipality sold the land to property developers Rabcav (a joint venture of Cape Theme Parks and Cavcor).

In July last year, Stephen Müller, director for Infrastructure and Planning at Overstrand municipality said, “The minister is negotiating with the owners to buy Schulphoek.” He said that should the sale go through, it could take 24 months before any construction started at Schulphoek.

This week, the municipality’s communications department said that the land [Schulphoek] had not yet been sold. They referred other questions to the Department of Human Settlements.

Nathan Adriaanse, spokesperson for the Department then referred us to the Overstrand municipality. On Wednesday, Marcellino Martin of the Department said, “Continued engagements with all the stakeholders are currently ongoing.”

IPID spokesperson Moses Dlamini said investigations into a number of cases ranging from assault, attempted murder and various acts of alleged brutality, are still ongoing. “We have been in contact with some of the victims through community leaders from a community meeting that was held last year where we obtained various statements to initiate our investigations. We still intend to obtain further statements as part of the investigation, as well as other forms of evidence,” he said.

Correction: The article originally said “Zwelihle residents have called an urgent meeting with government and police management”; the call was for meeting only with human settlements, not police.