Nohle drank steel wool and brandy to induce an abortion

How stigma drives an underground industry 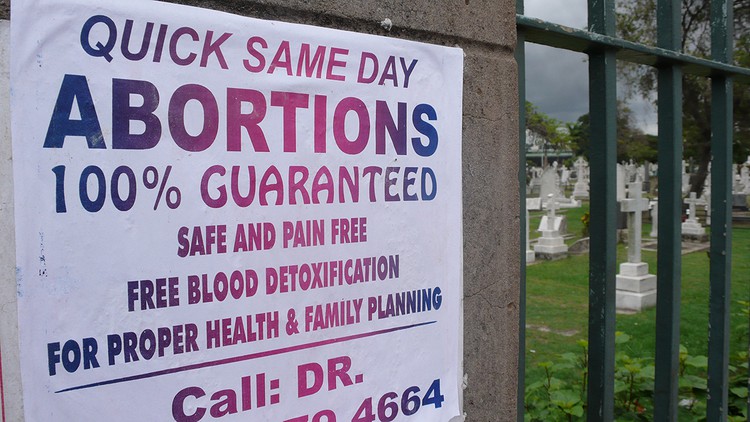 Nohle [not her real name] a 35-year-old sex worker, has had five abortions. The first two she tried to self-induce; the next three were performed in hospitals. Why did she not choose the public health system for her first two abortions? “Because of stigma, first”, she says.

Nohle is originally from Ngcobo in the Eastern Cape. She says that at age 14 she was raped by a man in his early twenties and became pregnant. She moved to Langa where her mother was living.

Nohle was three months pregnant when she tried to induce an abortion. She drank a mixture with crushed steel wool and brandy which her neighbour had told her about. She says after she drank it she felt dizzy and exhausted. She collapsed and was taken to Karl Bremer Hospital.

According to Whitney Chinogwena, spokesperson for Marie Stopes Clinics, a drink with steel wool and brandy is “not commonly used to the best of our knowledge”.

However, says Chinogwena, “The risks from consuming sharp objects are very real and immediate, including cuts and damage to the throat and later perforation of the stomach or bowel as the wool moves through the intestinal tract.

“We can also confirm that we see women in our clinics regularly who have attempted a wide variety of informal methods, many of whom we are unable to help at our level of care and need to escalate to hospital.”

Chinogwena says drinking various substances, including alcohol and household bleach, is a common way women try to end pregnancies. “What’s most heartbreaking is that we expect these type of desperate measures in illegal environments, not in an environment where abortion is legal. It speaks to the stigma, and to the very real access issues that women face in accessing a safe and legal service,” she says.

Nohle’s second attempt to induce an abortion was when she was 16. She was then working as a sex worker and living with friends in Langa. Some clients paid extra not to use condoms. She became pregnant. She did not know whether the father was her boyfriend or one of her clients.

When she was two months pregnant she was advised by a friend to buy pills from a store in Langa. She took one of the pills with vodka and brandy. She says she had cramps and bleeding and went to the hospital.

Nohle had three more abortions, when she was 20, 26, and 30. All were performed in hospitals. She says the nurses in the hospitals treated her well.

According to the Choice on Termination of Pregnancy Act of 1996 and its amendments, abortions may only take place in approved facilities. These facilities must have access to medical and nursing staff and appropriate surgical equipment.

Nohle now has two children and lives in Langa with them and with two children from her deceased sister. She is a volunteer with Mothers for the Future, a programme run by the Sex Workers Education & Advocacy Taskforce (SWEAT).

She says sex workers living in townships fear abortion procedures in hospitals because of stigma. The stigma has less to do with the hospital itself than with the way abortion is perceived by the women’s families, friends, and partners, says Nohle. Women sex workers are scared of how their boyfriends and husbands might react to their pregnancy, knowing that the father of the children could be either them or a client. The women resort to in-home abortions as a way of avoiding a trip to the hospital, which would raise questions from their partners.

Chinogwena said there was a myth that the choice to abort was generally only made by young women. ”This is not the case. Women terminate at all ages for all kinds of reasons, each one unique to her own circumstances.”

“Due to stigma, and often healthcare provider bias, younger women are given poorer access to contraceptive services, are more likely to detect a pregnancy later, and thus are more at risk of unsafe, backstreet providers.”

Chinogwena said there were many risks to women using illegal abortionists, including lack of aftercare information; incorrect medication or dosage; a lack of medical expertise to determine the stage of the pregnancy; inability to deal with immediate complications such as severe bleeding, uterine perforation, tearing of the cervix, severe damage to the genitals and abdomen, internal infection and blood poisoning. There were also medium term complications ranging from reproductive tract infections and pelvic inflammatory disease to chronic pain. Late complications include increased risk of infertility and ectopic pregnancy, miscarriage or premature delivery in subsequent pregnancies.

“Unsafe terminations can lead to serious health complications, such as haemorrhage, septicemia, internal organ damage, tetanus, sterility, and in the most heartbreaking cases, even death,” she says.