Most Tsakane shops have been gutted 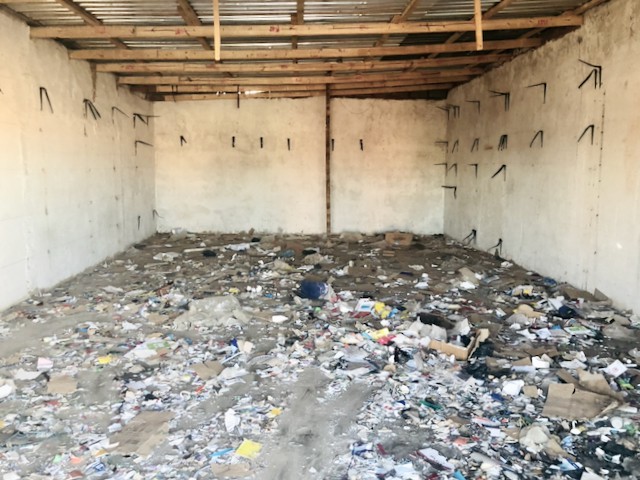 An immigrant spaza shop in Tsakane was stripped bare. In addition to the food stocks, everything was looted, including shelves, fittings and fridges. Photo: Kimberly Mutandiro

Residents of Tsakane, Brakpan, are afraid they will go hungry as most local shops have been gutted, not only their stock but even their shop fittings and fridges. All that is left are scraps of food and empty packaging on the shop floors.

Looting spread to parts of Brakpan on Monday. On Tuesday, the remaining shops were targeted. During Tuesday night and the early hours of Wednesday anything left was taken.

Witnesses say children were helping themselves to whatever food they could find during the looting. On Tuesday, youths were seen selling the goods they had looted.

Tshepo Mazibuko, 25, was holding a plastic container of 60 “snake sweets” and offering it for R30. It normally sells for R60 or R1 per sweet.

“It’s hunger, my sister. If l can get R30, l will buy something to eat,” he said. “Everyone is helping themselves to goods in shops, we just follow suit.”

His friends had bags of Shoprite goods to sell and also liquor.

“We have been hungry, no food or bread ever since shops around here were looted. This time there is no running to the mall because it has also been broken into,” said resident Nomsa Nkosi.

“People may have been stealing in the name of Jacob Zuma, but now even hungry kids are helping themselves. Life is tough out there,” she said.

“Some [looters] sat and ate food from the shop and drank cold drinks before carrying the rest home. The groceries were too much for them to carry,” said Abdul Hakim, who owns a spaza shop jointly with Said Mohammed. They were held up at gunpoint on Monday night and their shop looted. Some looters even left behind groceries they’d looted from elsewhere, the shop owners said. 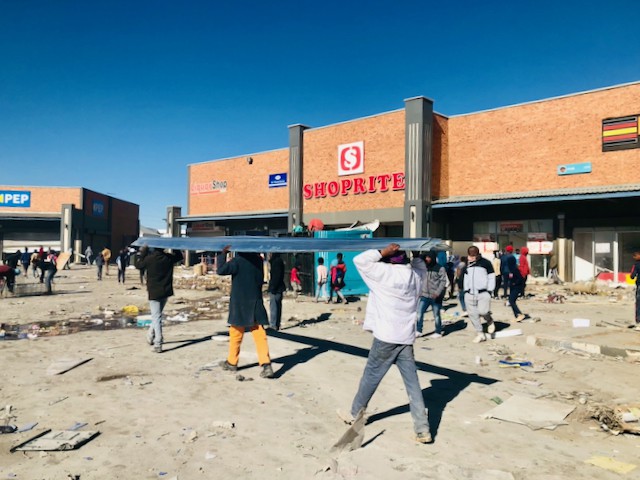 On Tuesday at Tsakane Square, people took turns trying to get money out of several ATM machines that had been blown open. People were also carrying off building materials from hardware shops. A woman carrying sheets of glass said she would sell them to a scrap yard.

Aziza Botha, who was standing and watching with her teenage son, said, “Most of the people stealing are hungry and unemployed. This stealing shows some of the effects after government eliminated the [R350 Covid-19] grant.”

“I told my son not to go anywhere near those looters. Stealing is wrong, but hungry people can do anything,” said Botha.

Albert Mogafe’s Kwatsadusa Bottle Store was cleaned out of liquor on Monday night. Left behind were a few empty bottles. He loaded his fridges to take them to safety before looters returned. His computer, tills and cash were stolen.

“I’m dumbstruck … The worst thing is we did not even have insurance. This is the end for me and a few employees who worked here,” said Mogafe. He said the business was already on the brink of collapse due to the successive bans on alcohol sales.

Spaza shop owners Mologeta Shobiso and Beyena Erumo were also cleaned out. They had closed up on Monday, fearing looting. They were sleeping in their living quarters when at 7pm they heard banging at the shop front. The looters soon broke through. Even the blankets from their beds were taken.

Shobiso tried to protect a bag of his life savings but he was punched and all his cash was taken.

“I watched helplessly because there were over 50 people taking turns to enter the shop, some carrying weapons,” he said.

“What will l survive on?” asked their landlord, Misheck Mazibuko. He has leased the shop to them since 2013.