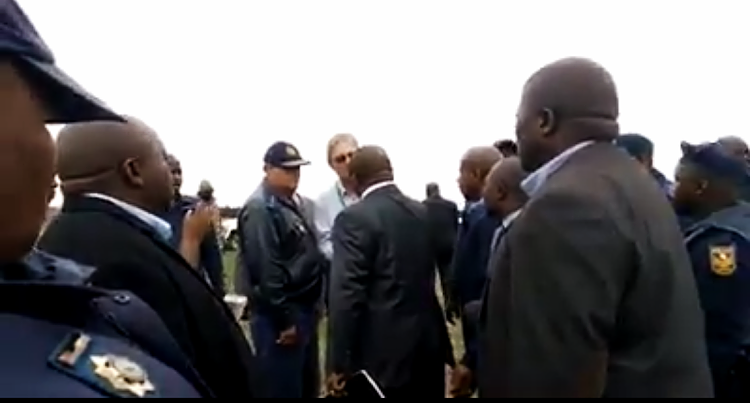 Spoor was charged with unlawfully and intentionally assaulting a police general “by pointing him with a finger”; disobeying an order by the police general to “keep quiet and not advance to the podium”; and “waiving hands” at an unnamed MEC (actually a national cabinet minister), and talking while the “MEC” was talking and “pointing him with a finger”.

The charges ­– described by Spoor’s legal representative as “a persecution and not a prosecution” – stemmed from an incident-filled visit by Mineral Resources minister Gwede Mantashe to Pondoland last September.

Here, many of the local Amadiba community are opposing an attempt by an Australian mining company to extract titanium from the mineral-rich coastal dunes in their traditional heritage and communal land at Xolobeni.

Spoor, from White River in Mpumalanga, has represented the anti-mining Amadiba Crisis Committee community group for the past 12 years.

The public meeting called by Mantashe at Bizana on 23 September descended into chaos after pro-mining supporters were bussed in from other areas. There was a strong police presence, including the riot squad.

This is how Spoor’s legal representative, Grahamstown-based advocate Izak Smuts, described the scene in his written representations to the National Director of Public Prosecutions to have the charges against his client withdrawn: “At the site of this gathering, community members sang and protested against the proposed mining operations in their traditional lands. A considerable phalanx of police gathered, armed with riot shields, armour, shotguns, teargas canisters and sidearms. Both public order police from outside of the area, and local police officials were present. A number of high-ranking police officers, including Major General [Andries Petrus] Swart, attended.”

Spoor had been asked by one of Mantashe’s aides to help quieten the crowd, but manoeuvres by the riot police inside the marquee had caused the protests to become louder, Smuts explained.

Spoor had then become involved in a strong exchange with the general about how best to de-escalate the tension and continue the meeting.

“In a heated discussion, Mr Spoor explained that he had been requested by an aide of the minister to assist in allowing the meeting to continue without interruption. Mr Spoor recalls gesturing with an open hand, while in discussion with Major General Swart, who was surrounded by a cohort of armed police officers. Major General Swart then asked one of his officers to escort Mr Spoor away from him.

“Mr Spoor sought out the assistance of minister Mantashe by venturing back into the marquee where the minister was seated. When he caught his eye, the minister gestured to Mr Spoor to come and speak to him.

“Mr Spoor was, however, grabbed by police officers and then struck over the back of the head. He was pulled outside by police officers by the shoulder and arm, and his shirt was torn. He was taken to Major General Swart, who suggested arresting Mr Spoor, before both he and Mr Swart mutually agreed to calm down and take a moment before taking any further action.

“Another person arrived, who introduced himself as an aide to the minister, yelling at Major General Swart to arrest Mr Spoor.

“Minister Mantashe then joined the group outside, and Mr Spoor explained that he was trying to help, but minister Mantashe accused him of interfering with his meeting. Mr Spoor was then arrested and … driven to the Bizana police station.”

In his representations, Smuts – who remarked on the “objectionable” grammar in the charge sheet – said there were several issues that “cast serious doubt on the executability and indeed bona fides of a criminal prosecution in this matter”.

On the first count, there was no statement describing any physical contact between his client and General Swart: “… the complainant will face an uphill battle in seeking to persuade the court that, surrounded as he was by heavily armed police, he nevertheless feared an imminent assault from an unarmed attorney.”

Smuts pointed out that the second and third counts against Spoor were referenced under the old Transkei Penal Code that had been used to suppress people in the former apartheid territory. But a recent Eastern Cape High Court judgment had ruled: “It would be contrary to the spirit and purport of the Constitution for any court to give recognition to an apartheid fiction that no longer exists.”

Smuts said it was apparent that the charges against Spoor had been prepared ex post facto in order to justify his arrest. “The pursuit of this prosecution is plainly an example of what has regrettably, in a democratic dispensation, come to be known as ‘SLAPP’ – Strategic Litigation Against Public Participation.

“It is illuminating that, although minister Mantashe is shown on video footage to wave his finger at others, he has not been charged with assault, as Mr Spoor has. It is further illuminating that, although Mr Spoor was struck over the head in the presence of a multitude of police, he, who perpetrated no assault, has been charged with assault, while his assailant has not.

“I respectfully suggest that, while such prosecutions, in pursuit of political interests, may have been commonplace in apartheid South Africa, there is no room in the democratic South Africa for such an abuse of the criminal justice system.”

The representations were successful, and on 15 March the Director of Public Prosecutions in the Eastern Cape sent a letter to the Senior Public Prosecutor in Bizana, declining to prosecute Spoor. No reasons were stated in the letter.

Spoor responded with a humorous tweet this week: “I am pleased to say I have been relieved of the stigma associated with being referenced as the ‘accused’ and standing silently, head bowed in the dock.”

In 2006, he successfully fended off a major SLAPP suit brought against him by mining giant Angloplats.