Stabbed on his way to the toilet, Khayelitsha man is now in a wheelchair

Sinethemba Mfaca spends his days trapped in his one-roomed shack 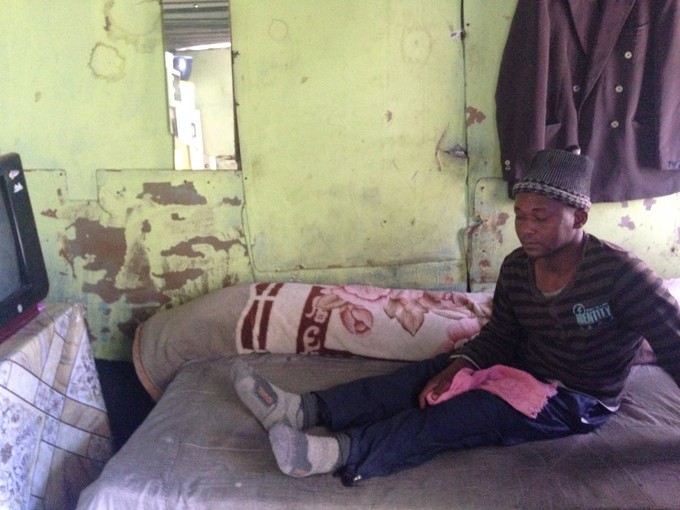 Sinethemba Mfaca spends most of his days in a one-room shack ever since he was paralysed by a stab wound. Photo: Thembela Ntongana

Sinethemba Mfaca of Khayelitsha has been in a wheelchair since he was stabbed on his way to the communal toilet. Unable to leave his one-roomed shack without help, he has to relieve himself in his room and wait for his brother or a neighbour to remove the waste.

One early morning in February, Mfaca was on his way to the nearby communal toilets when three men came to demand his phone and wallet.

“I only had my phone with me. They took it and stabbed me in the back once, and then they ran,” says Mfaca.

His cries for help were heard by a neighbour who took him to hospital. The stabbing had damaged his spinal cord, leaving him with no feeling from the waist down. After seven months, he was released from hospital in a wheelchair.

He says that’s when reality kicked in as he had to survive on his own.

Mfaca, 34, lives alone in a small one-roomed shack with little lighting. He spends his days sitting on his bed unless his brother or neighbour comes to take him outside. To leave the shack, his wheelchair has to be carried out as the doorway is too high.

He says otherwise his only form of entertainment is listening to children playing outside his shack. “The little ones sometimes come and play inside and I have some company just for that time,” he says.

Even when taken outside, he is unable to move far in the wheelchair as the pathways in the informal settlement are too narrow. He can’t even go to the toilet.

“When I made the house I didn’t know that I would be using a wheelchair. When I could walk, it worked for me,” he says.

Mfaca washes himself while sitting on his bed. He has to wait for someone to throw away the water. He relieves himself in a bucket and sometimes has to wait all day with it inside, covered with a plastic lid, until his brother or neighbour return from work to throw it out.

“I just want to be able to go to a toilet and not do my business at home, a toilet close to my shack,” says Mfaca.

He says there are a lot of things he could ask for but a toilet is the most urgent as it would give him some dignity.

Before the accident, Mfaca worked as a casual worker in the harbour. He now survives on a disability grant, part of which he uses to support his child in the Eastern Cape.

His neighbour, Simphiwe Blom, has become Mfaca’s main support. It was Blom who heard him call when he was attacked and who took him to the hospital.

Blom is worried about the danger of fire for Mfaca. Recently he came home from work and smelled burning food in one of the shacks attached to Mfaca’s. He saw smoke and broke down the door to get in.

“I knocked, and no one responded and that’s when I kicked the door open. The neighbour had got home drunk and fallen asleep while cooking. I worry what would have happened if I wasn’t there,” says Blom.

What Mfaca needs is a house with a toilet inside. “A house that will accommodate him being in the wheelchair,” says Blom.

City of Cape Town Mayoral Committee Member for Utility Services Ernest Sonnenberg said toilets are placed in available spaces and in places where they can easily be serviced.

“The exact placement is done in consultation with the relevant community. The placement of toilets is regularly restricted by high density and private land, among other factors. Some communities refuse to move houses in order to make way for placement or installation of toilets,” said Sonnenberg.

She said he could register online or at his nearest housing office. “He will also need to provide the City with a certificate completed by a medical doctor to confirm his physical disability in order to be flagged as a special needs case on the housing database.”