Merlin Mosoko has trained dozens of children to play basketball 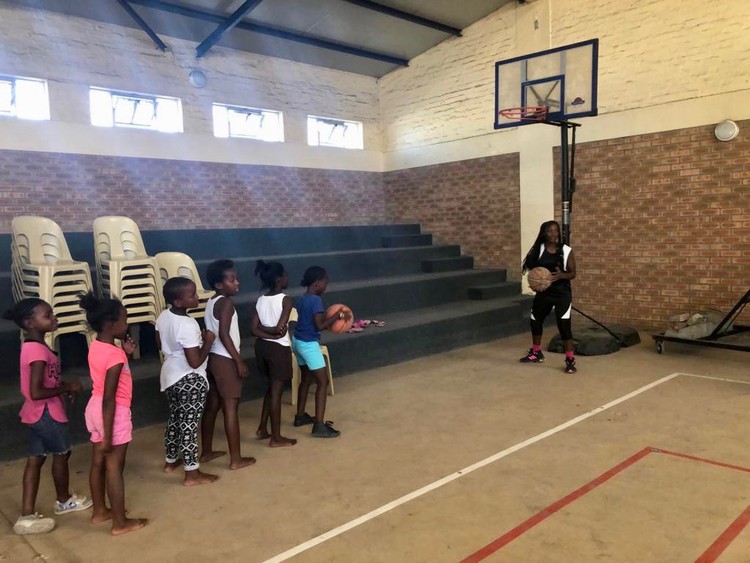 Established in 2013 by Merlin Mosoko, the Delft Umoja basketball club trains about 50 children, aged between ten and 19. Photo: Tariro Washinyira

“Here we don’t only play basketball. We are also taught about the dangers of substance abuse and other life skills,” says Allen Chisvo, a grade 12 learner at Leiden High School in Delft, Cape Town. “My dream is to become a software developer and play basketball part time.”

Chisvo trains at the Delft Umoja basketball club, established in 2013 by Merlin Ekwanza Mosoko. It is based at the Delft South Library and has about 50 children, aged between ten and 19.

Mosoko, 43, has played basketball since the age of eight. His father was Angolan and married to a Congolese woman. Mosoko grew up in the Congo (DRC). He was inspired by his cousin who played for the national team.

In 1995 a prominent businessman, who used to sell players in Europe, identified Mosoko’s talent. He brought Mosoko to Cape Town to seek better basketball opportunities, but it didn’t work out.

“My dream was to play in America but my manager, who brought me from Congo when I was 19-years-old, gave up on me,” says Mosoko.

He now lives in South Africa on an Angolan Special Permit (ASP).

In 1998, Mosoko started coaching youngsters at the Gugulethu sports complex and went on to coach the Hustlers basketball team in Gugulethu. He now also coaches basketball part-time at the University of Cape Town.

“When the institution closes [over the holidays] there is no job for me, then I wait until they open again,” he says.

He has some professional players and coaches to his credit, such as Vincent Ntunja, who made the national team. Ntunja told GroundUp: “[Mosoko] was a major influence in my life. We are still working together. When we meet we always laugh about some of the sacrifices he made for us and other children such as paying for our transport fare and food when we went out for tournaments.”

Around 1999, Mosoko took piecemeal work to survive. “A sportsman needs time to sleep and exercise. When you are a security guard you must stay up all night walking up and down,” he says.

In 2005, Mosoko started the Kumoja Basketball Club in Philippi. He was coaching about 60 learners aged between 14 and 18 from Vuyiseka Secondary School. With the help of Africa Unite, a human rights and youth empowerment organisation, he organised a tournament in which three teams participated. Unfortunately, he ran out funding and the project died.

Mosoko didn’t give up. He would get his son to bounce a ball outside the gate to their home in Delft and attract other children. When a number of children had gathered, his son would demonstrate how to bounce.

“In basketball bouncing is the main skill any player must know first. Height doesn’t matter and it’s a myth that players should be tall,” says Mosoko.

With his son’s help he started the Delft club with about 30 children aged between nine and 13. They trained on the street before they secured the library.

“When I saw the place and the courts I was amazed at how beautiful they were, and underutilised. After consultation with the officials we were given authority to use the place every Thursday. But recently we were told we can also train on Monday,” he says.

Mosoko uses his own money to fund the club, buy equipment and uniforms.

The young players struggle to have money for basic things, such as shoes and transport. The club only has six balls; not enough for training 50 players.

The club plays at UCT, Belhar and Gugulethu complex and participates in the Winter League organised by the Cape Town Basketball Association, which runs from March to October. Last year, the club won one game and some gold medals.